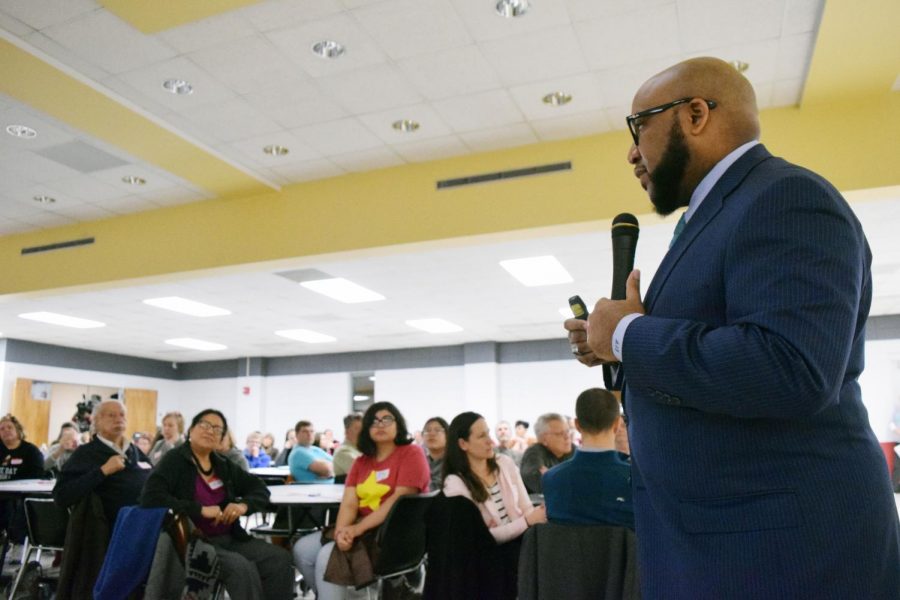 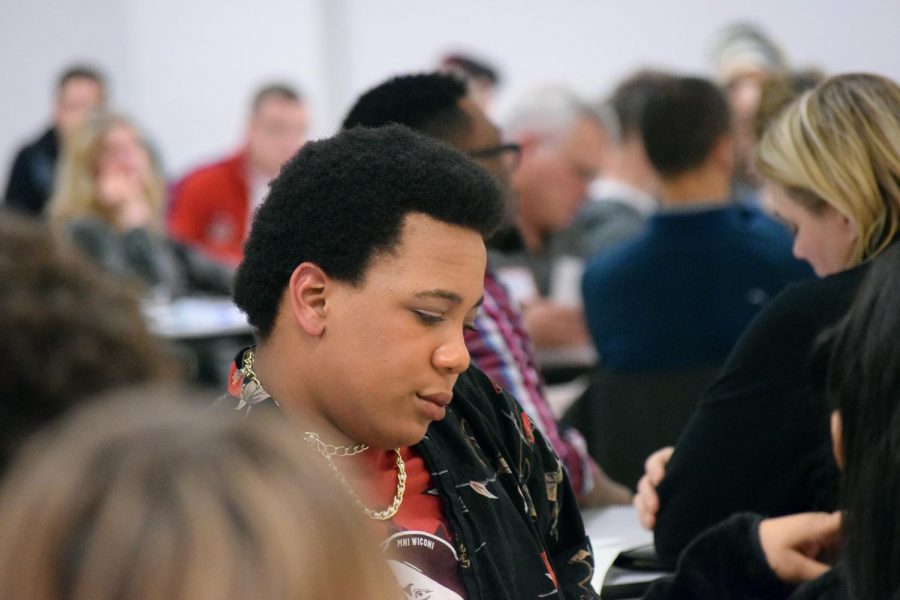 Gallery|7 Photos
Emily Kruse
Senior Baxter Spielman sits and listens to the speakers at the Community Safety meeting on Feb. 21. After two firearms and a taser was found on Lawrence High campus the week before, this community meeting was held to receive community input on how administration can improve student safety.

In wake of three incidents of weapons found at school, Superintendent Anthony Lewis hosted a community conversation Thursday night at Lawrence High School to seek solutions and include voices from Lawrence families.

Lewis’ primary goal was to not only address families directly, but to clarify the importance of keeping students and staff safe above all else. The meeting followed three weapons being brought to LHS in short succession this month: two loaded guns and a taser.

Lewis’ initial remarks referenced the aftermath of the 2012 shootings at Sandy Hook Elementary School, and the desire to focus on cooperative and preventative actions.

How To Report Concerns

“I wanted to be sure that we convey the message that we have to all come together to ensure we have a safe community,” Lewis said. “Not just a safe district but a safe community, and I want the focus to be on student needs.”

“I want to put politics aside,” Boatright said. “I’m not here to talk about laws or policy to curb gun violence, but those are important discussions to have.”

Boatright emphasized the importance of applying the teachings of BeSMART to daily life, especially when uncertainty is involved. She cautioned parents to not just consider their own practices, but to ensure that they talk to other parents about ensuring any guns in the home are secured..

“Everyone in Lawrence is talking about it now and we’re having meetings,” Boatright said. “You can say, ‘I just went to that community meeting about guns. Do you have a gun?”

After the presentation, observers were given the following questions to discuss with others around them.

Most participants acknowledged efforts by the district to combat problems, but some worried these efforts weren’t taking full effect.

“I think the things that the community and the school district are trying to do aren’t setting in,” Lawrence parent Justine Hamilton said. “They’re trying to hold trainings, but I don’t think they’re sinking in with students.”

During this process, Lewis walked around to hear input from individuals and find common issues with current practices. By listening to a range of voices, he hopes to work with other district staff to resolve more specific issues.

“The other exciting part was being able to talk to so many parents, just hearing their concerns,” Lewis said. “We can then look back on the data from the community and say, ‘This is what we heard. Now let’s narrow that down and go a little deeper into this.’”

One message was clear: Parents and teachers say safety risks, such as firearms and social pressures, require more regular and in-depth discussion.

“There’s certain topics that we discuss with ninth graders once,” school psychologist Sylvia Trevino-Maack said. “Now we’re realizing that one time in their high school careers is not enough.”

Lewis hopes the progress from the conversation will inspire other community members to make changes as parents, but insists that his role in caring for students will not change.

“My main message as a superintendent is that I care. I am here,” Lewis said. “ I want the goal for students to be like ‘Yeah I may have an adult here in the building or I may not, but I have a superintendent that cares about each and every one of us.’ ”

The district plans to have another meeting at Free State High School next month, and Lewis will be meeting with some students at LHS next week.