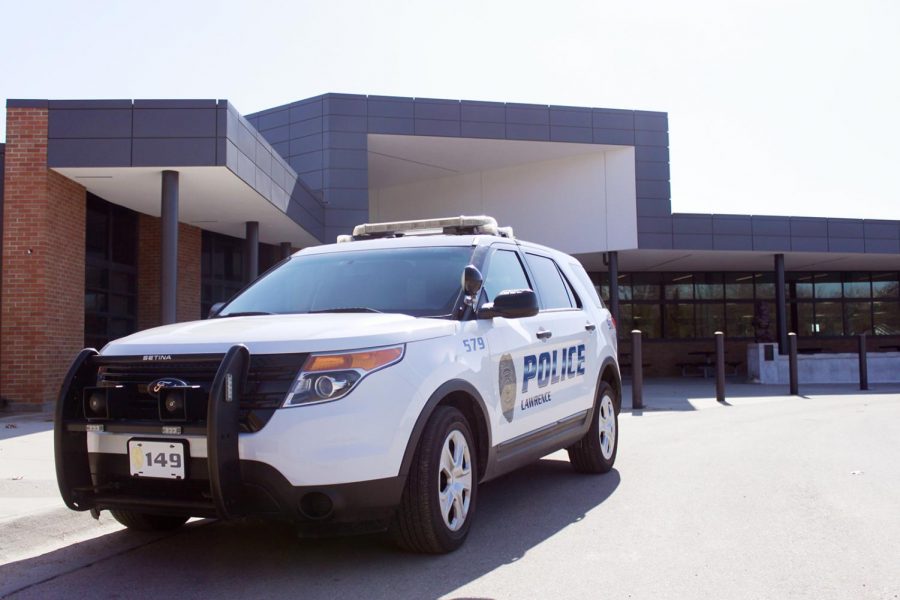 A Lawrence Police Department SUV is parked outside Lawrence High School on the afternoon of Tuesday, Feb. 12. Earlier in the day, a gun was removed from a student at school. It was the second such incident in less than a week.

For the second time in a week and the third time in this school year, a gun was confiscated on school grounds Tuesday morning by school administrators and school resource officers. The two incidents occurred over the course of three school days.

In the latest incident, a firearm was taken from a student Tuesday morning, district officials said. According to a district press release, there was no “direct threat” to students or staff. The weapon wasn’t in the student’s backpack, as the district originally indicated but was on the student, according to updated information sent by the district Tuesday night.

“There was no incident with the gun and no threat to student or staff safety,” a district’s press release said. “Acting on a tip that a student may have a gun at school, the LHS administration worked with school resource officers to conduct a search and confiscate the weapon.”

Superintendent Anthony Lewis said in an emailed response to questions that he believes the community needs to have a serious, open discussion on addressing “what has the potential to be a dangerous problem for our community.”

“With two weapons violations in less than a week’s time, I think it is important for a broader community discussion about public safety to occur,” Lewis said. “I issued a public statement today calling for a community dialog. It is my intention to work with others to begin that conversation.”

Lewis wants to learn about why students would bring firearms to school.

“We should learn more about motives as both of these investigations progress,” Lewis said. “I am interested in finding out why these students brought weapons to school. Did they feel unsafe? Did they intend to harm someone?”

Both of these incidents were discovered when students reported concerns to Lawrence High faculty. The previous issue occurred Feb. 6, before the two inclement weather days, when a firearm was found in a student backpack.

“The LHS students who reported to staff that they heard that this student might have a weapon at school are to be commended,” Julie Boyle, communication director for the district, said after the incident last week. “That information led to a safe resolution for all.

Lewis said there are a variety of safety measures in place at Lawrence High, but forming bonds between staff and students is most important.

“What is often overlooked is that every student must have a connection to a caring adult,” he said. “By building positive relationships and knowing the needs of their students, teachers and staff can set high expectations and provide the support each student needs to feel safe and be successful.”

The incidents were the third firearms issue at LHS this year. LHS students were accused of exchanging a gun on school grounds earlier this school year. One of those students, is scheduled to be sentenced later this month in that case. Free State High School had two incidents involving firearms in the past year.

Reporting concerns plays a big role in keeping schools safe, according to Boyle. There are many ways to report concerns, such as:

The district reached out to students and parents through emails and phone calls Tuesday morning. As students were sitting in third hour, associate principal Margene Brohammer read the district’s official statement over the intercom — a change in communication from last week.

English teacher Abby Hoffman said she spent much of the class period talking to her students about what had happened.

Her students discussed security measures such as metal detectors, secured doors, more personnel and reaching out to classmates who may need help. Hoffman sponsors SAFeR, a group formed in response to the deaths of 17 people on Feb. 14, 2018, in Florida.

“No one was harmed,” Hoffman said. “I’m OK, but still, it’s stressful, and it’s frightening. I mean, even just time period wise, on Thursday’s going to be the anniversary of the Parkland shooting and Marjory Stoneman Douglas and the communities nearby, they’re gearing up for all this mourning and grief, and we keep having these scares. That’s terrifying.”

Guns are not an accessory, they are not an emotional support device, and they are not a trinket. They are a lethal weapon. We need laws that enforce gun safety and respect and require that ownership be an earned privilege.”

“I think maybe talking about it more and continuing to do lockdown drills,” Adi Spears said, “and just making sure that students know what to do if they see one, who to tell and the situation that there is a shooting, I think the lockdown drills could be more thorough.”

The district is planning to address safety issues in the building with the planned bond construction, which will begin this summer. The project will close the campus and unite the main building and annex. LHS is also conducting more safety drills as a result of legislation approved last year in the wake of the Stoneman Douglas shootings. District faculty have also undergone additional safety training this year.

“We have to seriously address this as a society — parents and students should not have to worry about guns being brought into our schools,” Noreen Spears said. “I don’t know the circumstances surrounding the incidences of the students who brought guns into our school, but I think it is a reflection of our society as a whole. We live in a gun culture that does not command the level of respect that we need to induce for all firearms, or even human life for that matter. Guns are not an accessory, they are not an emotional support device, and they are not a trinket. They are a lethal weapon. We need laws that enforce gun safety and respect and require that ownership be an earned privilege.”

On Tuesday, students were encouraged to discuss the incidents with their families.  Senior Maria Godinez worried that wouldn’t be enough.

“I think the students who will go home and talk to their parents about gun violence and control are not the students who’re going to be bringing guns into the school,” she said.

Lewis will work with the school board, administrators, staff, students, parents and community members to discuss public safety, according to the district’s press release.

“I think it will be important to discuss what measures are already in place,” Lewis said, “and what additional measures may be needed to ensure the safety of the community’s children.”

Debate coach Jeff Plinsky has worked at LHS for 14 years. He believes that Lawrence High students tend to do the right thing, but in a large school like LHS, something will, at some point, go wrong.

“We’ve gone a lot of years without anything major happening in this school,” Plinsky said. “With a school this size, with as many students as we have, odds are eventually something is going to go wrong. It just is. This week was just a tough week for us.”

This story was corrected at 9:15 p.m. Tuesday to reflect new information about where the weapon was found.

This story was corrected at 10:00 a.m. Thursday to fix the capitalization of SAFeR.