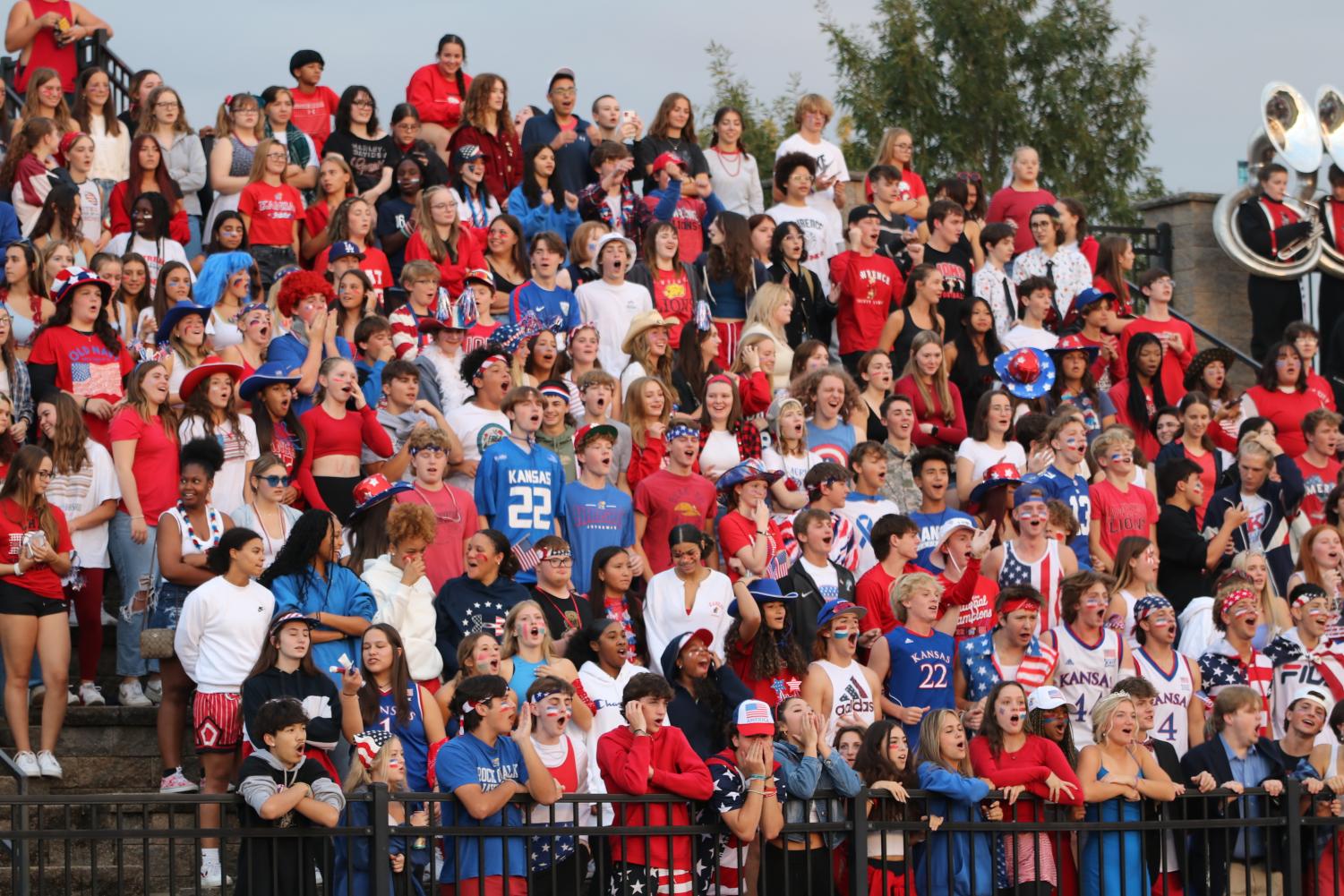 Football, homecoming court and lots of photos to cater to your needs!

By Jack Ritter and Maya Smith 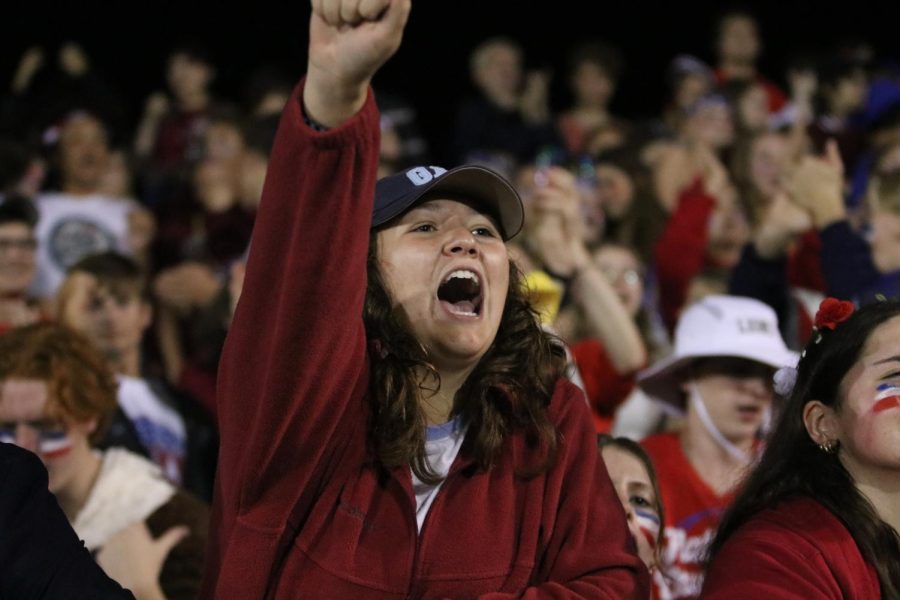 By Maya Smith, Editor-in-Chief of the Red & Black 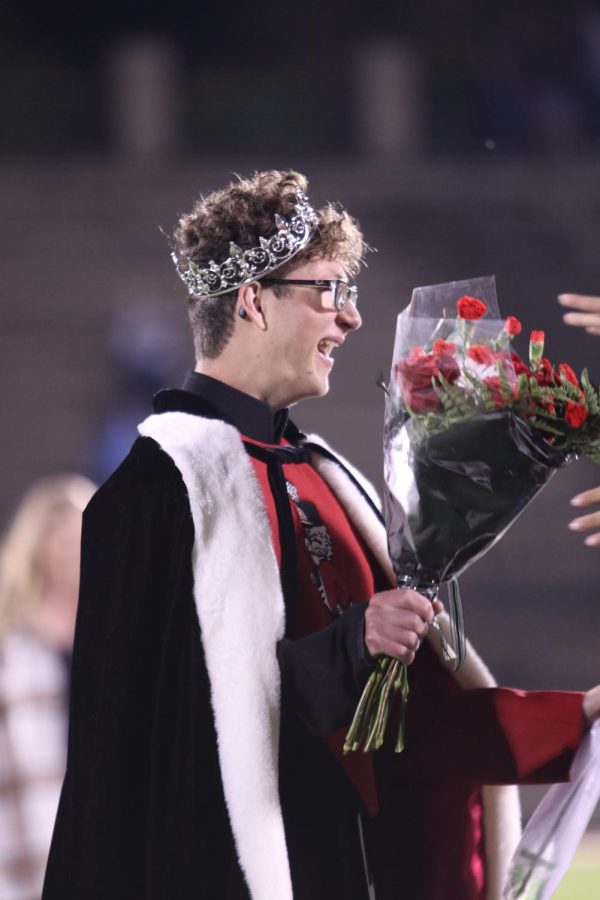 After a Lawrence High score just before the half, student morale and energy were at their peaks. Fans, students and anyone watching knew it was time to crown the Lawrence High Homecoming royalty.

“There was definitely a little tension,” said senior and student body secretary Timo Webb, who played a part in the student council’s organization of the ceremony. “Personally, I couldn’t wait to find out who won.”

As Tate Landes and Treven Gill’s names were announced, the crowd erupted in cheers, best illustrated by this fantastic video from @LHSBaseball on Twitter.

The student section and band chanted the royalties’ names as they made their way to the center of the field to be crowned.

“I kind of felt shocked. I was speechless,” Gill said. “I had no idea what to say. Tate and I were stunned.”

The marching band was most excited at the news considering the new homecoming royalty are both a part of the band. Landes said she never expected to win.

“I felt very grateful,” Landes said. “I love LHS. It was such an honor.”

Gill added he is excited to help carry the crowning tradition.

“Next year,” Gill said. “I get to pass it onto someone else and keep the LHS tradition alive!”

What a BEAUTIFUL moment!!! Congratulations Trev! You called it in IPS this morning!!! ❤️🦁✊🏾 pic.twitter.com/03ahoFVD1Q

Lions picking up steam heading into second half of season

By Jack Ritter, Co-Editor-in-Chief of LHSBudget.com 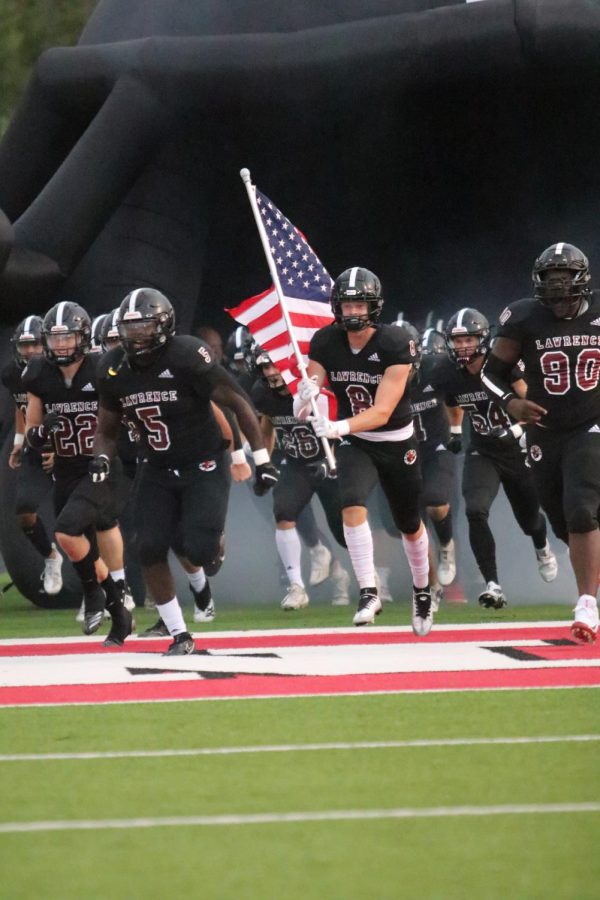 In their latest matchup, the Lions pounded the Olathe East Falcons (1-3), 47-6. The victory was a statement for the Lions as they move into the second half of the regular season.

“We beat them from the opening drive until the clock hit 0:00,” senior tight-end Cole Watson said.

The homecoming trashing of Olathe East comes in Lawrence High’s second home contest of the season. Three weeks prior, the team fell 36-32 to Olathe South (3-1) in the home and season opener.

But while the Lions were away, they started to get going and get going fast.

The Lions started with a goal-line stop to clinch a win against Olathe West (2-2) and then stomped past Shawnee Mission East (1-3) 45-14 the following week.

“As a team, we struggled early in the year,” junior quarterback Tyson Grammar said. “But we’ve started to figure out the little things. We all knew we had to get going early in the game, and our offense set that tone early.”

Grammar, who’s thrown for over 500 yards and five touchdown passes the past two games, said he’s seen a lot of improvement for the offense, but fans are noticing the special teams refine themselves too.

Senior Tyrell Reed, a transfer running back formerly of Highland Park, is a big reason fans see such a difference.

Reed has racked up nine touchdowns for the Lions, highlighted by two 90-plus yard kickoff returns and a 70-yard run against Olathe West. The transfer has undoubtedly bolstered the Lions’ scheme and attack.

“That’s how you play Lawrence High football,” Reed said of the Lions’ performance against Olathe East. “We executed on both sides of the ball really well. Even though Olathe East packed the box for run, we still found a way to run and pass the ball.”

Kenton Simmons, a senior linebacker with numerous division one offers, credits the improvement to the team’s consistency and willingness to drive forward.

“We’re starting to get from good to great,” Simmons said. “Our mentality has changed overall. We just have to keep staying focused.”

Gardner-Edgerton will prove to be a good test for the Lions before the playoffs. The Trailblazers have three convincing and quality wins and a loss to the defending 5A state champions in Mill Valley.

Once again, regardless of The Budget’s views on upcoming games, Simmons wanted to remind fans about not taking supposedly easy games for granted.

“A lot of people say it’s easier, but we still have to go out and win,” Simmons said. “We gotta go out there and compete.”