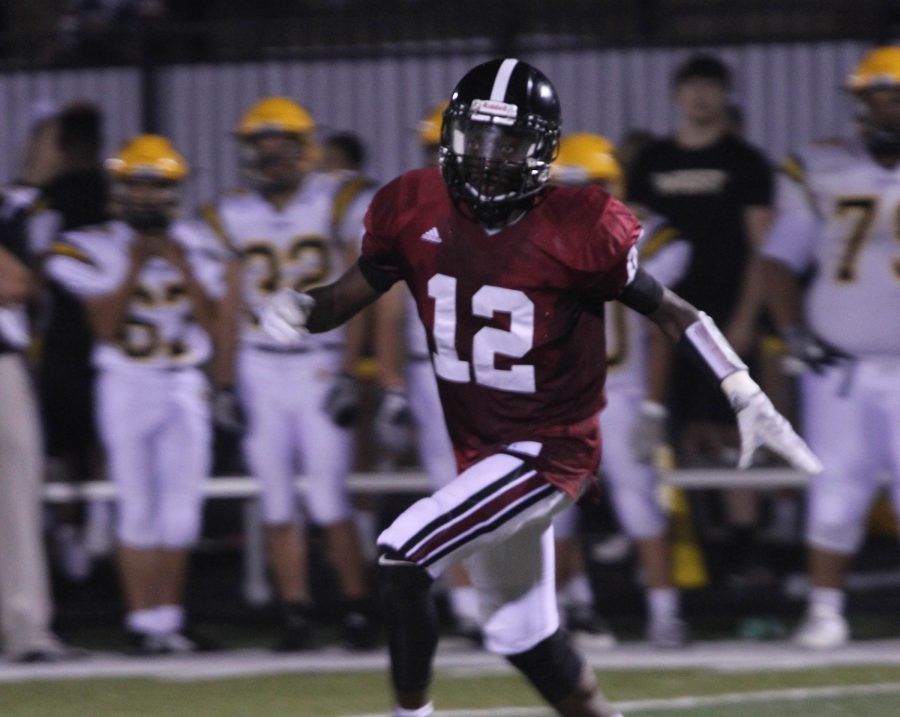 Junior Ekow Boye-Doe sprints across the field at the football game on Sept. 23.

Homecoming week was kicked off last week with spirit week.

Monday was camp day, Tuesday was twin day, Wednesday was college t-shirt day and Thursday was America day. On Friday, students wore red and black to show their school pride.

At 6:30 p.m. on Wednesday, Sept. 21, students from different clubs, sports and grades participated in the Homecoming parade. The parade started at the corner of 21st Street and Stewart Avenue—a different route from previous years—with floats concluding the parade back at Lawrence High.

Friday was the Homecoming football game. LHS played Shawnee Mission West and won 49-19. During halftime, the results for Homecoming King and Queen were announced. Seniors Trey Moore and Hannah Reed took the crowns.

Moore is on the football team, so senior Jake Barker stood-in during the ceremony for him.

“Trey just asked me and I’m honored to do it for him,” Barker said. “He’s a good friend of mine and he ended up winning which kind of stunned me at first. I was a little bit shocked, but I just want to say thanks to Trey. It was a great experience.”

The student section was also full of energy, supporting the Lions and Homecoming nominees.

“I always enjoy going to the football games to show school spirit and be involved in the student body,” sophomore Hunter Jones said. “Homecoming was a great experience that I am looking forward to again next year.”

At 8:00 p.m. on Saturday, the Homecoming dance ended Homecoming week with a blacklight theme. Students formed an aisle with the homecoming candidates as the Homecoming King and Queen ran through it.

“It was lit, it was pretty fun,” sophomore Sean Phomaseng said. “The music was pretty good and there was a lot of people there. I liked the theme; the blacklight was really cool.”

Homecoming week packed spirit week, a parade, an assembly, football game and dance all into one week and gave opportunities for the students to have fun throughout the week with their peers.