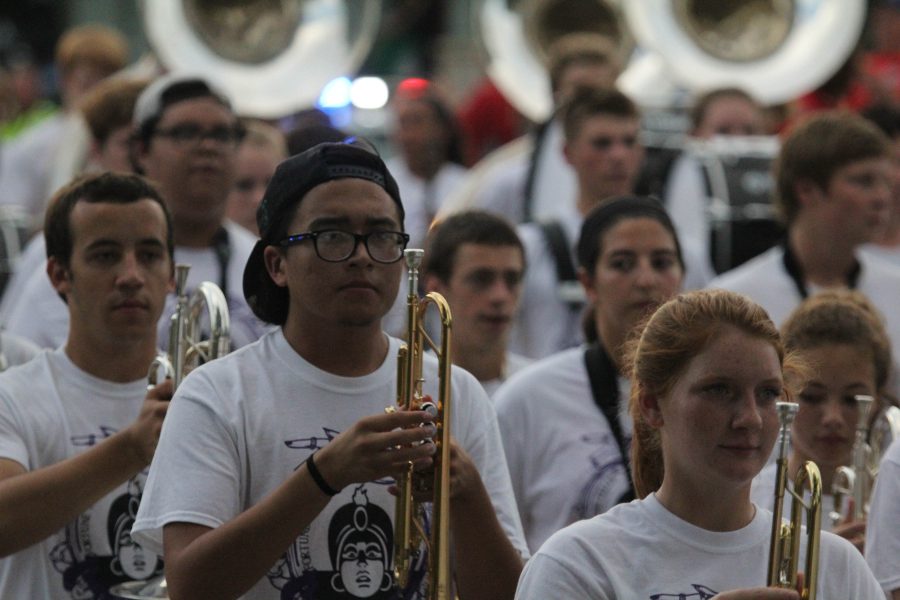 Years of tradition came to an end with new path

For a school like Lawrence High that relies so heavily on tradition, it’s unusual to see changes being made to past customs.

This year, that’s exactly what happened to the Homecoming parade route.

Historically, the parade has started at South Park, run down Massachusetts Street, then ended at LHS. This year, it started near 21st and Stewart Avenue and end, again, at Lawrence High.

“The concern on the part of the city was having Mass. Street and 19th Street not closed off to traffic and cars, and it just became a concern for them for student safety,” assistant principal Mark Preut said. “So the decision was to move the parade route off of Mass., off of 19th Street.”

The decision to move the parade from Friday directly after school to 6:30 p.m. Wednesday was also new.

“Plus it’s a good thing that students don’t have to miss class time to prepare for getting the floats and stuff all set up.””

“The change to move it to Wednesday night was in part to better facilitate safety, [there is] less traffic on that street at that time,” Preut said. “Plus it’s a good thing that students don’t have to miss class time to prepare for getting the floats and stuff all set up.”

There have been mixed reactions from the student body. Some are glad that the parade might be safer for spectators.

“If it helps, I mean, it doesn’t really matter where we do it, but if it changes…and makes it safer for kids and parents then I think it’s good,” sophomore Maria Godinez said.

Other students, like junior and FYI club board member Chisato Kimura, are concerned about the parade being held in a less community-centered place than downtown.

“I think it might be just a lot of parents, and that’s what the parade’s going to be about this year,” Kimura said. “And I’m not sure I really like that because I think the parade should be for the whole community of Lawrence. Mass Street is much more accessible, I feel like, to most of the community.”

Though it may not be as centralized as some would like, Preut said he was confident the parade would be just as exciting as past years.

“[The parade will] march into the parking lot,” Preut said. “One of the things we wanted to do too was increase the excitement around Rally Around the Lion and the bonfire, so we’re making that a much bigger event.”

Preut also said having it in the evening would allow for more people to attend.

“[Last year] it was great for students at Central and kids at Cordley because we marched by those two schools, but kids at South, kids at Schwegler, kids at all the other elementary and middle schools that feed into Lawrence High had no chance to see the parade,” he said. “Now it’s open for everybody to be able to see the parade.”