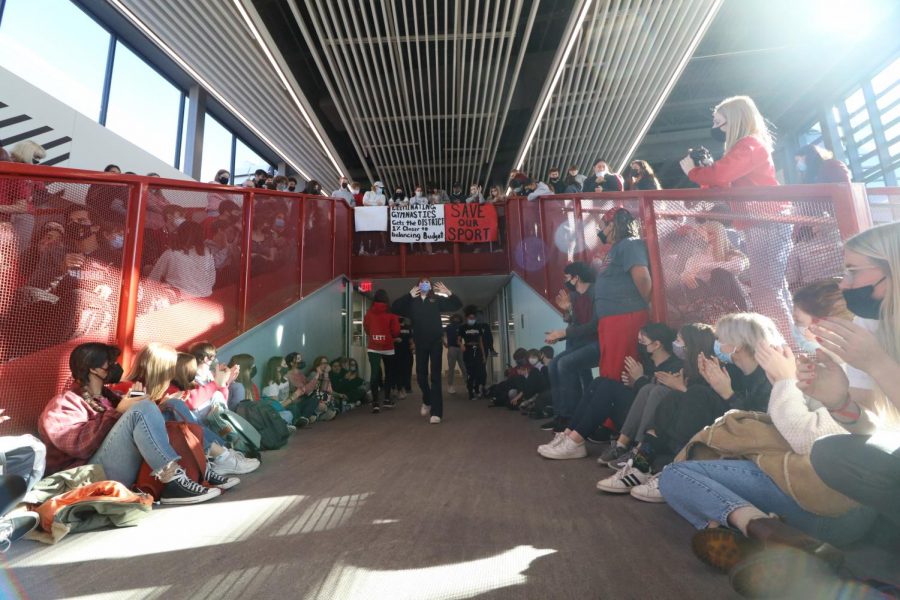 By Cuyler Dunn, Co-Editor in Chief of The Budget 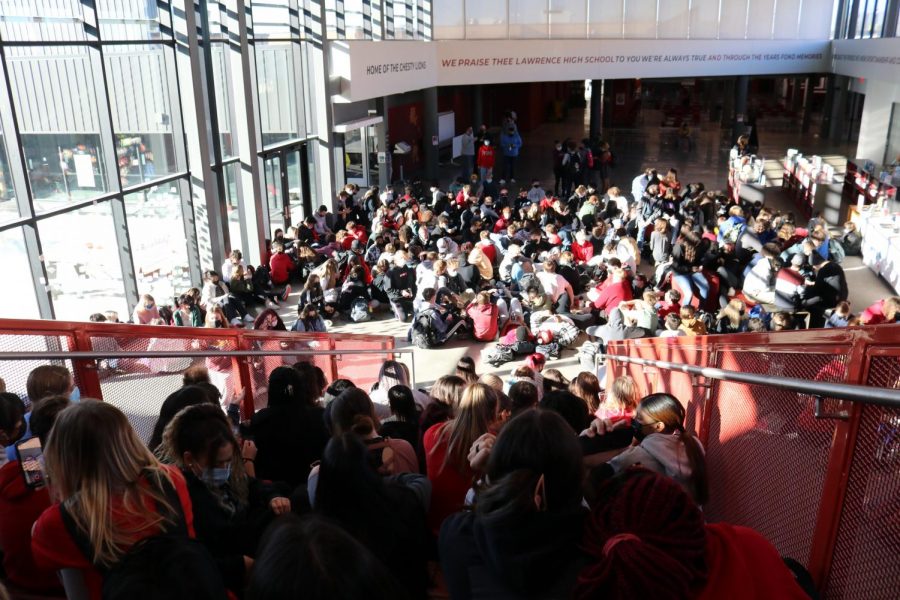 Gallery|20 Photos
Kenna McNally
The learning stairs and atrium fill with students during a sit-in protest against the cancellation of girls gymnastics.

Students packed into the atrium during fourth hour today to protest on behalf of the gymnastics team in the wake of a recent district proposition to cut the program.

About 350 students, wearing LHS gymnastics shirts and other Lawrence High apparel, skipped their classes to participate in the sit-in, which was organized by student body leaders and the gymnastics team. Across town, hundreds of Free State students also walked out of classes in support of the gymnastics team.

Students held signs that read, “Save our sport,” “Don’t hurt our athletes for your poor planning” and “How are your paychecks, district officials? Who’s next?”

“This sport is so important to a lot of people, and it is a woman-dominated sport,” junior gymnast Sophia Zogry said. “We just want to be treated like every other sport.”

In their speeches, students highlighted the culture of the program as a unique and invaluable experience that high school students should have.

“I met some of my best friends going into high school gymnastics,” sophomore Charlee Burghart said. “When I decided to do gymnastics, I was welcome with open arms, and I’ve never felt so safe in an environment.”

Gymnasts at both Free State and LHS recognize their sport to be diverse and inclusive.

“There are so many people of color,” Zogry said. “There are all types of people — not just women. Non-binary people, people who just go by different gender identities, a lot of LGBTQ+ people, people from low-income families.”

While the gymnastics teams at Lawrence High and Free State compete separately, they currently practice together at Jayhawk Gymnastics and share coaches. Both teams have qualified for the state competition each of the last four years with Free State winning state last year and LHS taking second in 2018, but many athletes say they feel disenfranchised by the USD 497’s actions toward the program.

“They don’t really show appreciation or acknowledge us,” said sophomore state competitor Emily Brandt. “It’s hurtful. We do a lot and are very good at what we do.”

During the protest,  team members participated in a handstand competition and showed off other skills. At the end of the event, Student Body Co-President Sam Lopez spoke to the crowd.

“I just want to thank all of you guys for being here,” he told the crowd. “When you guys leave today, I want you feeling like you made a difference.”

Lopez spoke about the history of LHS being a force of change on controversial issues. He referenced a 2017 sit-in on behalf of transgender students. LHS also had a previous history of sit-ins to advocate for inclusion of students of color in schoolwide activities — events that are recorded on the mural extending the length of the building.

“We have a history of being a force of change,” Lopez said. “The atmosphere here is dynamic, it’s progressive, and we’re always looking for ways that we can move forward, that we can move past any difficulties we face, that’s special. The type of spirit that we have here is second to none.”

Throughout his speech, Lopez thanked school administration for allowing the protest to take place.

LHS principal Jessica Bassett sent an email to staff on Tuesday night saying administrators wouldn’t pursue disciplinary action against students who choose to participate as long as it remained peaceful.

“I believe it’s important that they learn to advocate for the things that they believe in and their right to exercise their free speech,” Bassett said. “I think that’s very important. It’s important that they know they could make a difference for their community, especially around the things they are passionate about. Making sure that they do that in a peaceful and organized way, but also in a way to get the attention of those who make the decisions. I think this is a powerful act of freedom that every American needs to know and honestly, I actually appreciate the way that the team has come together and put this on, and the way the students at Lawrence High are responding.”

Athletic director Mike Gillman also watched the outpouring of support for the program.

“I think it’s going to bring awareness and at least have the conversation open to what their concerns are about the program, and I think that’s what’s really good about today,” Gillman said.

The decision rests with the school board, which will vote on the proposition later this month. School board member GR Gordon-Ross said the decision will come down to discussions at that meeting.

“This is a recommendation that was put forth by administration and so we need to look at all the reasons why administration gave us and look at if it’s possible to address all those incidents,” said Gordon-Ross, who was at LHS observing the sit-in.

Julie Boyle, USD 497 executive director of communications, listed many reasons for the recommendation to cut the program. Among the issues is a lack of facility space for storing equipment, costs for replacing equipment, rental space expenses, participation levels, and funding concerns, as well as staffing and safety issues. As the district attempts to close a $1.7 million budget shortfall this year and a $2-$3 million shortfall next year, Boyle said the gymnastics program costs about $32,000 to operate.

“The district acknowledges the dedication, hard work, and success of the student-athletes and coaches, and understands the feelings of loss associated with this recommendation,” Boyle said. “This is a difficult decision.”

The combination of issues is what led to the proposition, it isn’t just one concern that poses the problems for the district.

Girls’ gymnastics has faced the risk of elimination before. Most recently, elimination was discussed in 2016 as Olathe and Shawnee Mission discussed the future of the sport. In 2020, there were 14 programs across the state and 99 participants, according to the Kansas State High School Activities Association. From 2000-2020, an average of 154 gymnasts competed statewide.

Boyle said possible elimination has nothing to do with the addition of other sports, including Unified Bowling.

“The district administration has been discussing the discontinuation of gymnastics for several years…” Boyle said in an email.

Gymnastics coach Kat Farrow spoke about the importance of gymnastics in the community and challenged the idea that the sport was dying during an interview when she stopped by the sit-in.

“While there are a dwindling number of programs, our programs are actually burgeoning,” Farrow said of the district’s 22 gymnasts this year. “In order to constitute a gymnastics team, you have to have three all around athletes, and we have seven times that number.”

Bassett spoke about her views on the importance of activities and sports in high school. She emphasized the empathy shown by student athletes from other activities.

“I think it’s passion about, number one, their sport, but secondly, it’s connecting them to the entire school community,” she said. “As an athlete, I know how important my sports were to me. I also can look out and see that I see students from all sports and activities. I can see that they know and understand what it would feel like for them, so I think it’s more than just about the sport. It’s about the entire experience with athletics and activities in the high school experience.”

The decision to propose cutting the program was made known Saturday in an email from Coach Farrow to gymnastics parents. Quickly after, students began organizing on social media and spreading the word for the planned sit-in.

Gordon-Ross, who will vote on the issue, said he was impressed with the showing from students.

“I think it’s a pretty impressive show of support,” Gordon-Ross said. “I would say that a lot of these students probably didn’t know about the gymnastics program before this came out. I think that the unity that the student body is showing for a decision that they feel is unfair is pretty impressive. It’s pretty impressive to protest within a meaningful way and within the rules and within the bounds. This school has a history of that, and I think this is just one in the long line of things that this student body is coming together and expressing their opinion together.”

Many teachers also stopped by to take a look at the turnout.

“I think Lawrence High has a rich tradition of protest and this certainly fits in and this is one of those times when student voices should be heard,” social studies teacher Jack Hood said.

“This is not only vital to LHS and Free State, but all other leagues will get shut down across the state,” she said. “It’s not just a Lawrence thing. This is bigger than just us.” 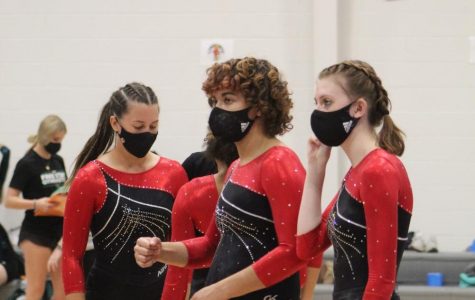 “They canceled our program.” On Wednesday, Dec. 1, Lawrence High and Free State gymnastics coach Kat Farrow was abruptly messaged by FSHS athletic director Amanda Faunce, LHS athletic director Mike Gillman and Director of Secondary schools Rick Henry, asking if she could meet with them. Farrow said that during the meeting, she was informed that through a series of “tough decisions” the...

The gymnastics team’s cautious approach paid off with a full and rewarding season. Even being considered a high-risk indoor sport, the gymnastics team managed to have zero cases. The team completed a full season, finishing off at the state championship in high spirits, with Paris Spotted Tail taking first on vault and floor. Expectations for the season were kept low due to the uncertainty surrounding COVID....

Mounting the beam, senior Eden Kingery was already confident she would land the routine. Once she did, her teammates and coaches rushed toward her in celebration of her fourth place win. The Lions came home from the state championship with a close second place finish and several individual medals. After the new head coach Michelle Seidner brought the Lions to fifth place last year, the team approach... 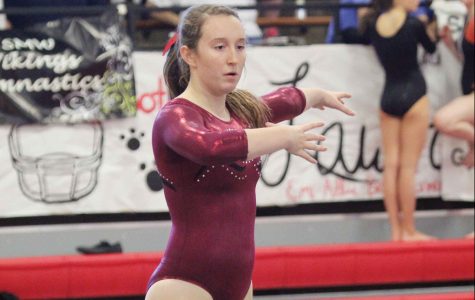 Gymnastics program on a tightrope

For 44 years, gymnastics has been offered as a 6A sport to girls wishing to compete. As soon as next year however, it may not be around. In the past few years, talks of cutting the program have been discussed, due to lower numbers of athletes and lower numbers of schools choosing to participate in the program, according to Cheryl Gleason, the Assistant Executive Director for the Kansas State...