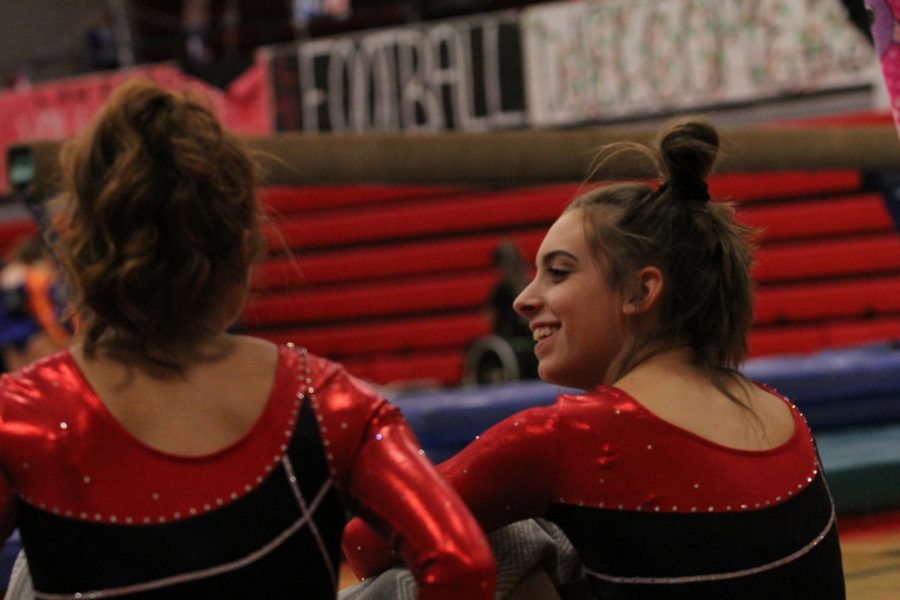 Eden Kingery speaks to her teamate during a gymnastics meet.

Led by a new coach and young stars, the Lions fall just short of a state title

Mounting the beam, senior Eden Kingery was already confident she would land the routine. Once she did, her teammates and coaches rushed toward her in celebration of her fourth place win.

The Lions came home from the state championship with a close second place finish and several individual medals.

After the new head coach Michelle Seidner brought the Lions to fifth place last year, the team approached this season with eyes set on success.

That energy was solidified when the team broke a collective score of 100 in the first meet of the season, an accomplishment that took them until league last year. After snagging second place at the Sunflower League competition, the Lions secured a top spot in the state ranking.

“The last couple years we’ve had good people,” senior Josie Hickerson said. “But we haven’t had enough to get good team scores. This is the first year we’ve truly had a good squad throughout.”

Freshman Paris Spotted Tail was a newcomer who helped bring the team together. Spotted Tail has been involved in gymnastics since she was four, following in her sister’s footsteps. She was unsure about the team when she first joined.

“I thought it would be a lot different than club and that I wouldn’t like it,” Spotted Tail said. “But it was actually really fun and I loved the team chemistry.”

Spotted Tail started off the season as an essential varsity member, and she came into state with few fears.

“We just hoped because we didn’t really have any problems at other meets and we’re a bigger team this year,” said Spotted Tail. “In the end, the one team we did lose to was really good.”

Despite being a freshman, Spotted Tail proved how essential her talent was to the team. She earned an impressive 7th at state, alongside two 2nd place medals in floor and vault.

With seniors Hickerson and Kingery placing 5th and 6th overall in the competition, and Hickerson ranking first in vault, the Lions were able to snag second place. They placed below Olathe East by only a few points.

“We have been working really hard all season, so that is what got us up to second,” Kingery said. “We didn’t place lower than second as a team all year. I feel like we all are pretty happy with second. That is the highest that we have placed at state since I have been on the team, so that was exciting.”

The team’s strength at vault and refined tumbling routines at floor shined at state, and helped set their focus on improvements for next year. The leading performances during the season and at state by the team’s younger members also cemented confidence in the team’s future.

“I think we’ll be really good,” Spotted Tail said. “There’s a lot of not-seniors that are good already, even if our team might be smaller next year.”