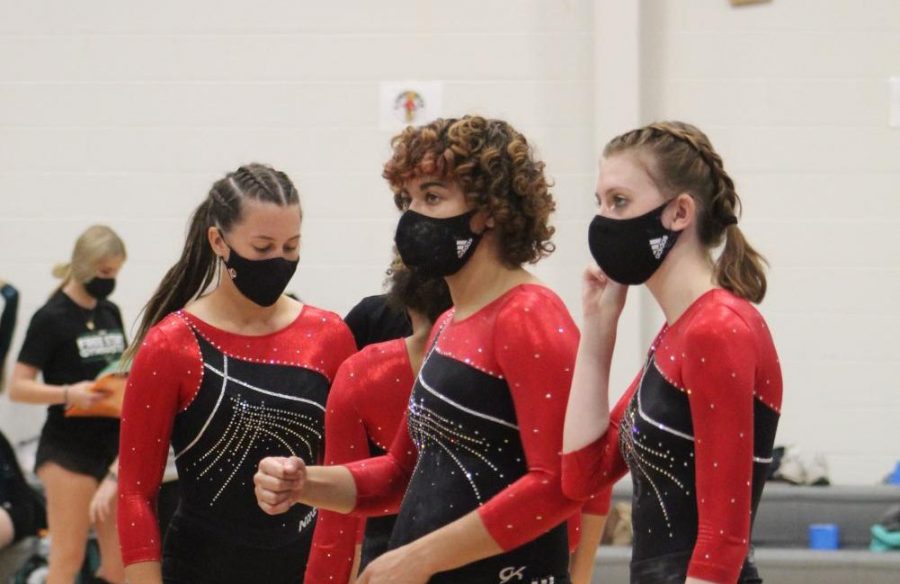 LHS gymnasts watch as others compete during a gymnastics competition.

Peers, parents, students, fans and gymnasts from all over Kansas come together in protest of USD 497’s decision to discontinue gymnastics at both high schools.

By Jack Ritter and Cuyler Dunn

“They canceled our program.”

Farrow said that during the meeting, she was informed that through a series of “tough decisions” the Lawrence Public Schools administration had come to a proposal to discontinue gymnastics at both Lawrence High and Free State.

In response to the sudden announcement by USD 497, student leaders have spoken out and organized movements against the decision.

The Director of Communications for USD 497, Julie Boyle, informed parents in an email on the reasons behind the decision. Boyle noted that the district has been gauging the cut for a number of years.

“Several factors led to this recommendation,” Boyle wrote. She listed off various reasons, including lack of storage space for equipment, concern for the safety of those moving equipment, the safety of currently used and dated equipment, and ultimately the cost of replacing said equipment.

“The combined estimated costs of coaching, needed equipment purchases, and transportation for the program are $32,000,” she wrote. “This is challenging because of the district’s current budget shortfall.”

Junior Sophia Zogry and the team disagree with the $32,000 figure.

“That number is totally wrong,” she said. “Our equipment is up to date, so there is no need for funding there. The coaches’ salaries add up to roughly $10,000, so it’s really not that either. The only other argument they have is that we have to rent out Jayhawk Gymnastics to compete and practice at. But, if they factored in gymnastics during their $90 million remodel, that wouldn’t be an issue.

“The other thing bothering me is that it’s a winning program, Free State and LHS have each had considerable success for a number of years, especially in 2018 for LHS and 2020 for Free State.”

In response, Zogry has turned to her peers for support. Her teammates, coaches and friends are all prepared to rally.

“We WILL fight this,” Farrow said. 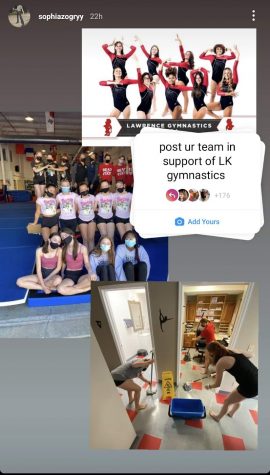 On social media, the movement spread quickly through the usage of Instagram stories, where over 170 community members have posted their teams in support of the Lawrence gymnastics teams.

Zogry also took to social media to organize a protest at Lawrence High on Wednesday, Dec. 8 during fourth hour.

“It’s important to protest this because gymnastics is left in the dust and forgotten all the time,” Zogry said. “Many times we’ve had to pay for bus drivers or even transportation. They’ve told us we have to carpool or find rides and have just refused to give us buses for transport.”

In a message to the student body, Student Council co-president Sam Lopez rallied students to support their gymnastics team.

“This type of support for each other is what makes our school so awesome,” Lopez said. “Our athletes are some of the best in the state, and it’s so important to support them whether that’s at a board meeting or a Friday night game.

Quickly after, Free State announced plans for a sit-in at the same time to show solidarity and support. Zogry said that students from Olathe and Shawnee Mission are also planning to show

“If you want to make a difference,” Lopez said, “here is your opportunity.”

The Budget reached out to Julie Boyle, Rick Henry, Mike Gillman and Amanda Faunce for comment but has not received a response.