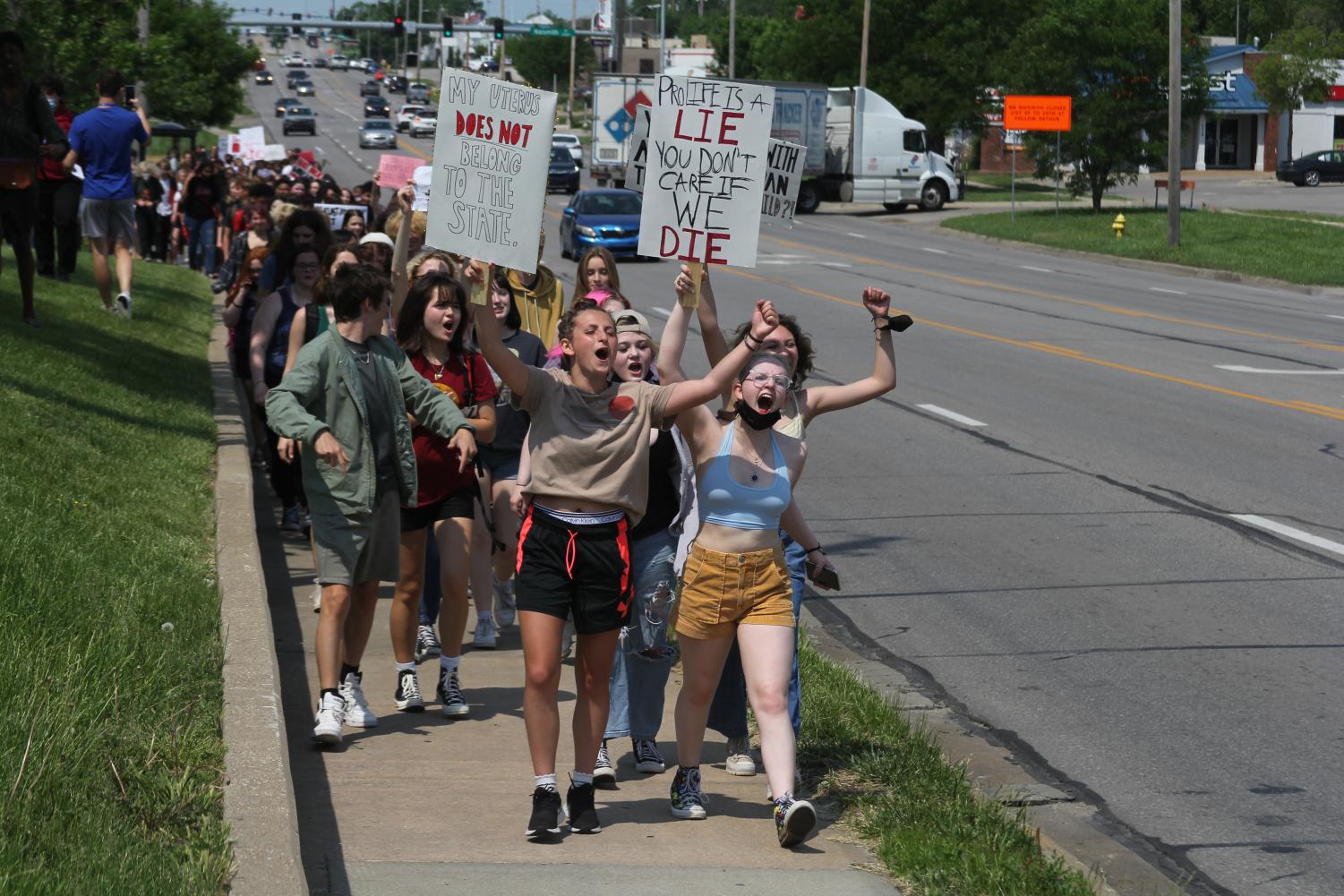 Students participate in a walkout in support of abortion rights on May 17. (Maebelle Hamiln)

Students participate in a walkout in support of abortion rights on May 17.

Students walk out in support of abortion rights

Throughout the walkout they chanted “My body, my choice” and were met with honks of support from cars which spurred cheering from the crowd.

“I just think it’s really important for us to have control over our own bodies and I don’t think that old politicians should be regulating what I do with my uterus and my life,” freshman Grace Sanders said.

The protest was organized online via Instagram by Free State sophomore Adriana Cazares who spread the word to LHS students so they could participate as well. Free State had a similar walkout at the same time. USD 497 Executive Director of Communications Julie Boyle said that the district respects the rights of students to peacefully protest issues important to them as long as substantial disruptions to the learning environment are avoided. 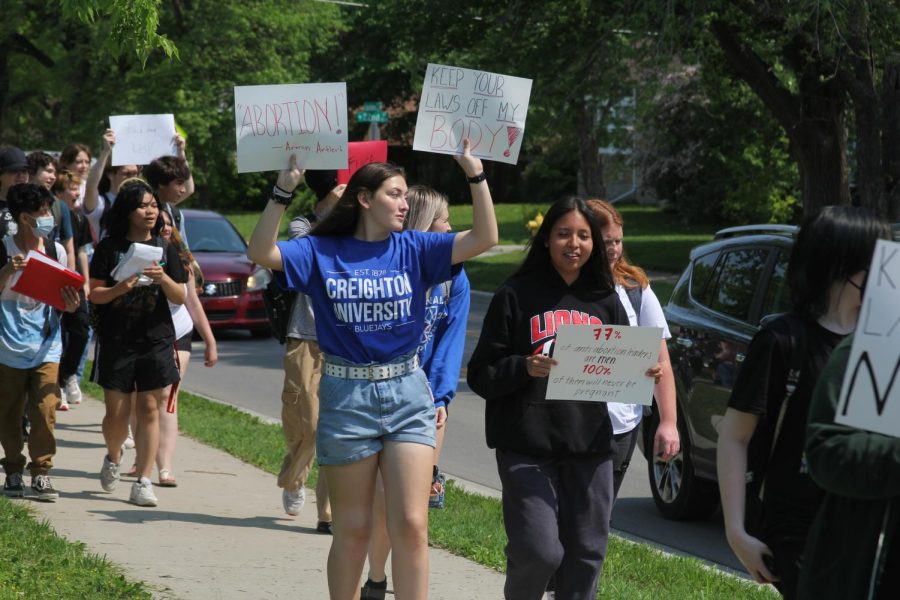 “I hope people realize how much it means to people,” freshman Xayden Cromedy said. “Even though we’re young we can still show people what’s going on in our minds and we think it’s not OK that we’re getting our rights taken away.”

The leaked draft opinion, published by Politico, showed that the Supreme Court was planning to overturn the monumental 1973 abortion rights case and has spawned celebration from anti-abortion activists and national outcry and concerns over the future of abortion access from pro-choice activists.

“I feel like this is such a prominent thing for people with uteruses everywhere,” Sanders said. “Even at such a young age it’s a really big thing that can affect our future forever.”

The change was seen by many as a step backward instead of forwards.

“When I first read about it, I was shocked because we’re supposed to be changing and becoming a better place,” freshman Devyn Ridings said. “What’s really happening is we’re all going back and we’re getting our rights taken away as women. It’s really disappointing.”

Because of the Supreme Court’s 6-3 conservative majority, many abortion rights activists have been fearing, and preparing, for the overturning of Roe vs. Wade for months.

“I felt sick to my stomach,” sophomore Annika Maximov said. “I felt helpless. It stems from patriarchal misogyny. It shames women from having sex and making them pay the price when sex comes from a man’s pleasure.”

Kansas has proposed an amendment for the state’s constitution to remove the right to an abortion. The amendment will be voted on in August.

The amendment, known as “Value Them Both,” was originally introduced as legislation to the Kansas Legislature in January 2020 but failed in the House in February 2020 after all Democrats and four Republicans voted against it. The legislation was then reintroduced at the start of the 2021 legislative session, resulting in the calling for a special election in August 2022 for the people of Kansas to directly determine the future of abortion rights in Kansas.

The move by the state is in line with many other state level restrictions, some of which would remove access to abortions almost entirely.

A citywide protest meant to raise awareness about this amendment and encourage eligible high schoolers and adults to vote will be happening on June 4 on Massachusetts Street. It is sponsored by the University of Kansas’ American Civil Liberties Union and Planned Parenthood, and organized by Cazares’s mother, Susan Laubsch.

The protest will feature speeches from high schoolers, middle schoolers and doctors.

We’re all super young and we’re all willing to come out and protest for what we think is right and I think this generation is really making a change.”

The possibility of having to raise a child as a high schooler, dying during childbirth or not being financially prepared to have a kid has caused distress among students. These students’ signs read, “You don’t trust me with a choice but you trust me with a child,” “Pro-life is a lie, you don’t care if we die” and a sign with names of women who died during child birth questioning in bright red letters, “What about their lives?”

Leaders of the protest were passionate about bringing publicity to the issue and showing that high schoolers have voices that need to be heard.

“I think it’s pretty scary but I think we can get through it,” Cromedy said. “Especially since we’re all super young and we’re all willing to come out and protest for what we think is right and I think this generation is really making a change.”

Finn Lotton-Barker and Jack Ritter contributed to this report.