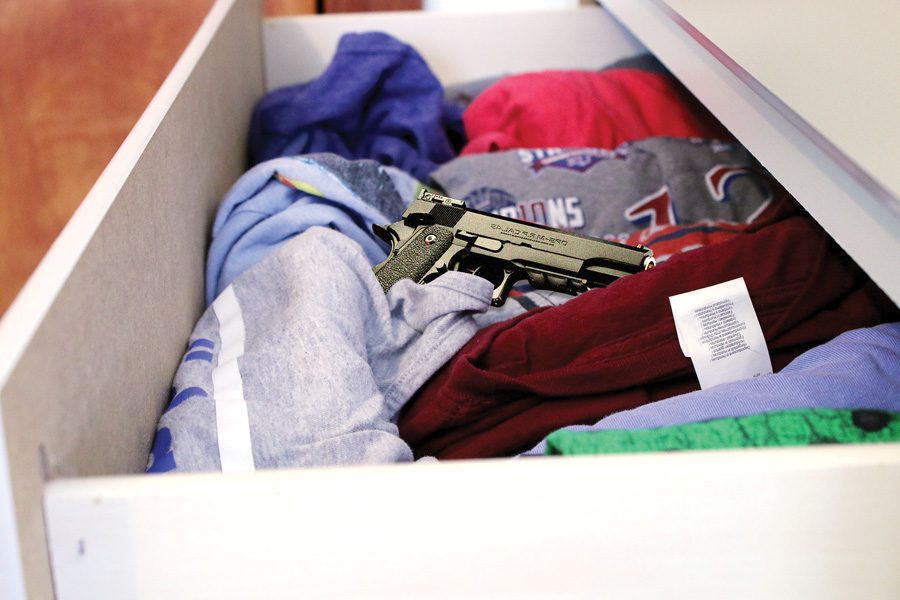 About 4.6 million American children and minors live a home with at least one loaded and unlocked firearm, according to the Giffords Law Center. Three guns brought to LHS this school year came from home.

Access to guns an issue, students respond with mix of concerns

Each of the three times that guns made their way to Lawrence High this year, students found those guns at home.

Those incidents — twice in February and another in the fall — have pointed to the issue of the easy accessibility of weapons and the culture around guns.

“We have to seriously address this as a society — parents and students should not have to worry about guns being brought into our schools,” parent Noreen Spears said. “I don’t know the circumstances surrounding the incidences of the students who brought guns into our school, but I think it is a reflection of our society as a whole. We live in a gun culture that does not command the level of respect that we need to induce for all firearms, or even human life for that matter. Guns are not an accessory, they are not an emotional support device, and they are not a trinket. They are a lethal weapon.”

According to the Giffords Law Center, about 4.6 million American children and minors are living in homes with at least one loaded and unlocked firearm. Police said both of the guns brought to LHS in February were loaded. One, which was found in a student’s backpack, had a round in the chamber.

The group Be SMART emphasizes the importance of keeping firearms out of reach to prevent accidents. Be SMART presented at the Community Conversation held at LHS in the wake of the most recent incidents.

“Every year, 300 children 17 and under gain access to a firearm and unintentionally discharge it, injuring or killing themselves or others,” Be SMART representative Debra Boatright said. “The ‘A’ is for ask, to ask about unsecured guns in the home.”

Boatright encouraged parents to ask other parents about guns in the home just as they might inquire about curfews or alcohol.

One message was clear from the community meeting: Parents and teachers say safety risks, such as firearms and social pressures, require more regular and in-depth discussion.

“There’s certain topics that we discuss with ninth-graders once,” school psychologist Sylvia Trevino-Maack said. “Now we’re realizing that one time in their high school careers is not enough.”

Junior Cobin Retter is in regular contact with guns, but said it hasn’t changed his outlook.

“I’m pretty familiar with guns — I mean I shoot guns on a regular basis,” Retter said. “I do a lot of hunting…I don’t really think guns have had very much of an impact really on what I think about the incidents. I mean, I still think it’s pretty messed up to have guns in school, just because I use them outside of school doesn’t mean I think that that’s acceptable at all.”

Sophomore Giovanni Ventello says theses incidents may stem from students’ belief in the need for self-protection.

“I believe most of the incidents in which students brought weapons to school were in hopes of defending themselves against other students with weapons,” Ventello said.

Retter has a different take.

“I guess I would disagree with a lot people that having more guns causes more gun-related incidents,” Retter said.

Ventello said recent incidents have made him worried about going to school.

“School is hard enough for high schoolers,” he said. “We should be worried about dumb stuff like tests and our social lives, not literally being shot and killed in our classrooms,” Ventello said. “Some of my friends and I were even uncomfortable just going to school with so many gun-related incidents happening recently.”

“It’s so crazy,” Doyle said. “I mean, really. It’s crazy to think that we are more in danger of witnessing or experiencing gun violence in school than we are walking down the street.”

Ventello’s discomfort is matched by frustration at the slow pace of gun reform in America. His cousins live in Sandy Hook, Connecticut, where 26 elementary school students and staff members were killed by a gunman in 2012. His family members lived only few miles away.

“It’s like after all of these events, nothing has been done,” Ventello said.