Current Hall of Honor inductees speak on the importance of diversity

Dr. Larry Kwak is a world-renowned physician and scientist who has pioneered breakthrough innovations in immunology and cancer vaccines. His accomplishments led him to be named one of TIME magazine’s “100 most influential people” in 2010. He was also awarded the 2016 Ho-Am Prize in medicine. The Ho-Am Prizes recognize people of Korean heritage who have made significant medical advances. Dr. Kwak credits a lot of his growth to a high school mentor who sparked his interest in the field. We reached out to Dr. Kwak to discuss the Hall of Honor and the lessons he learned during his time at LHS.

Here is our conversation about the Hall of Honor slightly edited for clarity:

Dunn: Describe what you think your accomplishments mean to your community?

Dr. Kwak: I am privileged that my calling to help people is also my chosen occupation. In high school during a summer internship at a hospital lab, I did menial tasks, but at the end of each day, my mentor invited me into his office to look at slides of cancer cells. He challenged me to ask the question of why there were there and the even bigger questions of whether they could be harnessed to fight cancer someday.

That question inspired me to pursue a career as a physician and scientist and my lifelong quest to harness the immune system to fight cancer. Inventing new treatments for cancer that can be offered to patients who don’t have other options is what still gets me excited about going to work every morning. Making an impact on cancer earned me recognition in the time 100 and the equivalent of the Nobel Prize in South Korea.

Dunn: What advice would you give to current Lawrence High Students?

Dr. Kwak: As you think about your future, think big, in terms of maximum impact. We all have a universal calling to help others and improve humankind. Developing excellence in your chosen craft will require sacrifice and perseverance.

Dunn: What is your vision for Lawrence High’s Hall of Honor?

Dr. Kwak: The purpose of awards and honors is to inspire those around us and the next generation. 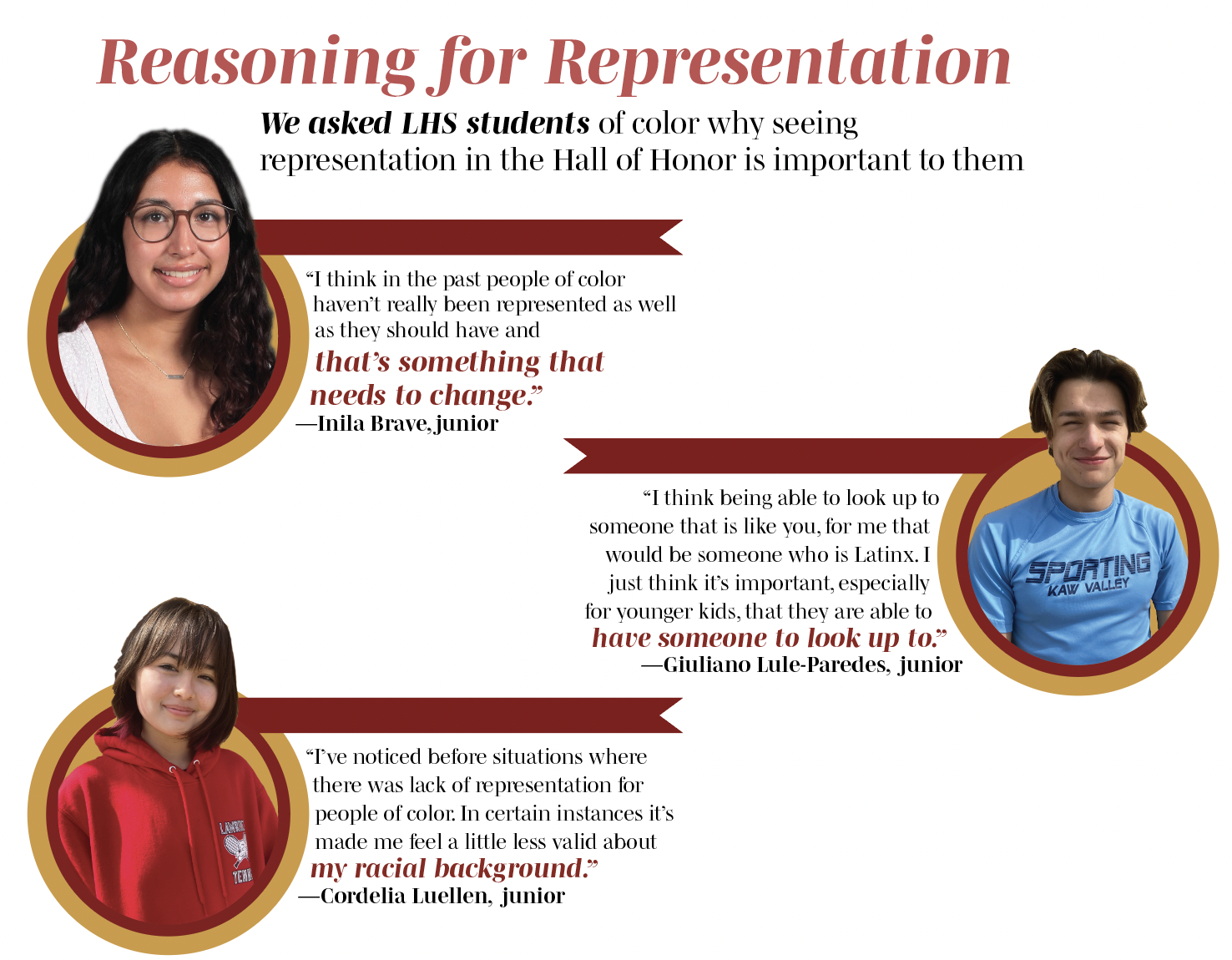 Doug Coffin has been a professional painter, sculptor and mixed media artist for more than forty years. A Potawatomi and Creek Indian, Coffin grew up on Haskell Indian Nations University’s grounds and graduated from Lawrence High School in 1964. Coffin has used Native American inspirations in his art to create his unique artistic style. He’s a recognized artist that has had his art displayed all around the world and a wonderful example of how connecting with your roots can help you pursue your passions and succeed in life. Coffin was inducted into LHS’s hall of honor in 2006. We reached out to him to ask about the importance of representation in the Hall of Honor and what it meant to him to be inducted.

Here is our conversation about the Hall of Honor slightly edited for clarity:

Roman Rojas: What’s the most important thing you learned during your time at LHS?

Coffin: There are a lot of different groups that form throughout the process of going through high school. There are the sporty people, artsy people, in those days you notice those obvious differences. But at the same time, the class of 1964 Lawrence only had one high school so everybody was thrown into the same kind of environment so you felt that you were up against the same things and you were going to get along with everybody as much as you could. As far as that people did seem to get along as far as I could tell.

Roman Rojas: What impact do you think diverse representation could have on students?

Coffin: People need to respect the differences and realize that people are the same. We’re all related. There are all kinds of success stories and they all started off at Lawrence High. It shows that people can achieve their own successes no matter where they are. People have done some remarkable things. Part of the common bond is going to the city of Lawrence. People of color worked as hard as anybody.

Roman Rojas: What did it mean to you to be inducted into the Hall of Honor?

Coffin: Well I got the call that I was inducted and I started laughing which I don’t think they expected. I was like “Did you get the wrong number? Why are you calling me?” I wasn’t the best student, the brightest student, the hardest working student but again I had my vision of the singular thing of what I wanted to do.