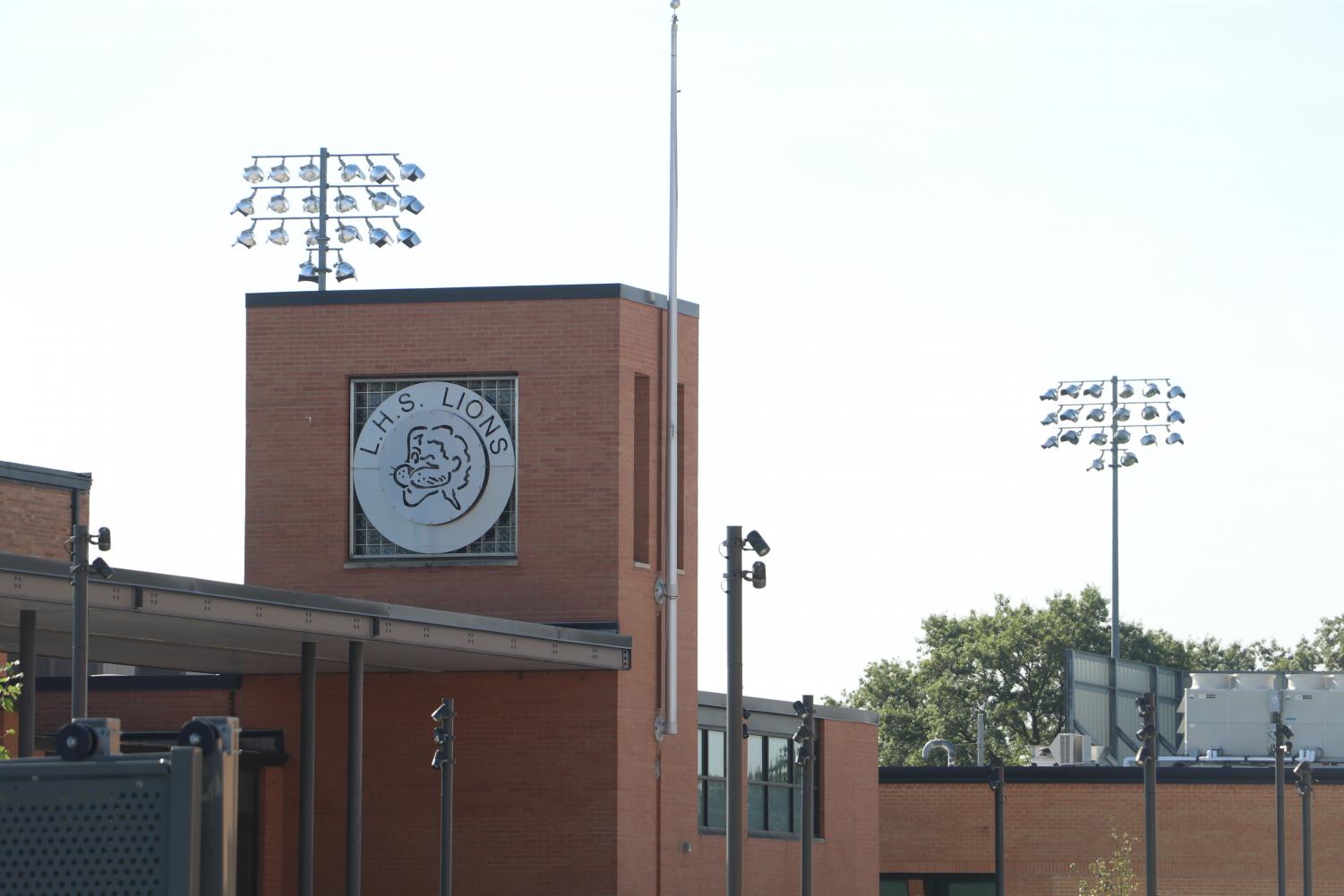 While much of the school has changed, the iconic skyline of the Lawrence High school building has remained the same. (Owen Musser)

While much of the school has changed, the iconic skyline of the Lawrence High school building has remained the same.

After construction and a global pandemic, it’s time to build LHS back

By Cuyler Dunn, Co-Editor in Chief of The Budget

The marching band yells in unison as they’re called to attention at the north gate of the football field. They start their parade around the track, marching in step with the drumline as they enter through the front gate and roar at the top of their lungs, a tradition that has been celebrated for decades.

They round the first corner and march past 26 football state championship banners, only a fraction of the 112 state titles won since the school’s inception in 1857.

They finish the parade by playing the fight song in front of an award-winning spirit squad and an overflowing student section decked out in themed gear making so much noise they lose their voices the next day.

Filling out the rest of the stands is a collection of fans, parents, teachers, alumni and community members. They rise to their feet as the football team walks out in organized rows with their arms linked.

The fight song plays again as the winningest football team in Kansas history breaks through a banner and runs onto the field. They run out donning black helmets with a singular white stripe. The same helmets they’ve worn for every single one of their 32 undefeated seasons.

In view from the football stadium, the boys soccer team is already leading by multiple goals. The volleyball team won its game two nights earlier.

Earlier that day at school, the choir program spent an hour preparing their concert for the Kansas Music Educators Association, where they are an honor choir for the second year in a row. They rehearsed right next door to the award winning orchestra program.

Head down the hallway, and there sit display cases filled with awards for outstanding journalists, photographers, film makers, artists and more, including a national award for the previous year’s yearbook.

Upstairs, the debate and forensics room houses scholars hard at work and shelves filled with trophies, including a state trophy and collection of national trophies from last season.

Hidden deeper in the school building are an array of foreign language classes, where students have received international fluency certification.

Anywhere you look, you see students excelling at their crafts, pushed to their best by coaches and teachers.

But the arguably more important rebuilding project has just begun this fall. Lawrence High is a school driven by history and tradition. Just take a look at the mural that now spans the side of the school, and you’ll see years of history, tradition and success immortalized in bright colors and striking symbolism.

This year is crucial to building those traditions back and reinstating the school pride and culture of success that sets LHS apart.

That effort takes every student and staff member’s cooperation equally.

Twenty years ago, band teacher Mike Jones began his time at LHS. Instantly he was blown away by the environment of success that LHS had.

“When I first arrived in 2001, this was a building that was really high functioning,” Jones said. “The chess club was amazing, StuCo was amazing, the tennis team was amazing, the most sports championships in the nation are here, the fine arts are out of this world. Just stepping into that tradition, everything that Lawrence High does is good, and I was like, ‘How in the world? How is this even possible?’ ”

“This is a very student-driven school,” he said. “The teachers are amazing, but the students really buy into the tradition of Lawrence High, and they take ownership.”

In order to continue this student-driven success, upperclassmen pass down traditions to underclassmen and push them to buy into the culture of pride and success. Students drive the traditions forward because they have seen past students do the same.

For many upperclassmen, the pandemic accelerated their evolution into student body leaders. The last time many seniors attended a school event they were merely sophomores. But Jones called on them to remember the people who were leaders in the school when they were younger and take on the responsibility that now resides with them.

“This is your time to make Lawrence High great because you understand that previously students made this place great,” Jones said. “Now, it’s your turn.”

Jones said nothing represents this idea like the Chesty Lion, which has been the mascot for LHS since 1946, and to Jones, he embodies the work ethic shown by students and staff to make LHS great year in and year out.

Fellow long-time teacher Valerie Schrag said being a Chesty Lion brings a burden and honor that few other schools can match.

“Chesty Lions are keenly aware of the needs of others,” she said. “They protect the most vulnerable and defend the rights of their fellow students to be exactly who they are. They are activists and individualists, musicians and athletes, college prep students and those who will pursue a trade. We are a community and a family that supports each other through our successes and our struggles. We push each other to be our best, for ourselves, for our school, for our community.”

Like Jones, Schrag described a ‘passing of the torch’ as those inspired by the history of Lawrence High create the history that will go on to inspire future Chesty Lions.

“Chesty Lions are not idle, we act,” said Schrag. “We take responsibility for our community and for our traditions.”

Tradition is an integral part of the LHS community. For Schrag, one of the most salient LHS traditions is watching the community as a whole come together to support one another in times of need.

“Eleven years ago, I remember walking into the first LHS Pink Out football game and being moved to tears by all of the pink I saw in the stands,” Schrag said. “The Pink Out was held in honor of former LHS teacher Shannon Wilson, who had been diagnosed with breast cancer earlier that fall, and she’s been in remission ever since. The LHS community surrounded Shannon with love, with pink and embraced all who fight various forms of cancer. We came together because one of us was in need. We’ve done it so many times since, one of the LHS traditions that I know will continue.”

This year already has presented so many seemingly insurmountable challenges. Managing a full school schedule in the midst of a pandemic. Trying to hold classes, sporting events and school dances in a building nobody recognizes. Attempting to fill gaps in education from alternate learning models.

But listening to Chesty Lions who have come before us will guide us through these challenges and beyond them farther than imaginable.

“Lawrence High School is the only high school I ever want to teach at,” said Schrag. “I’m a Chesty Lion – now and forever.”