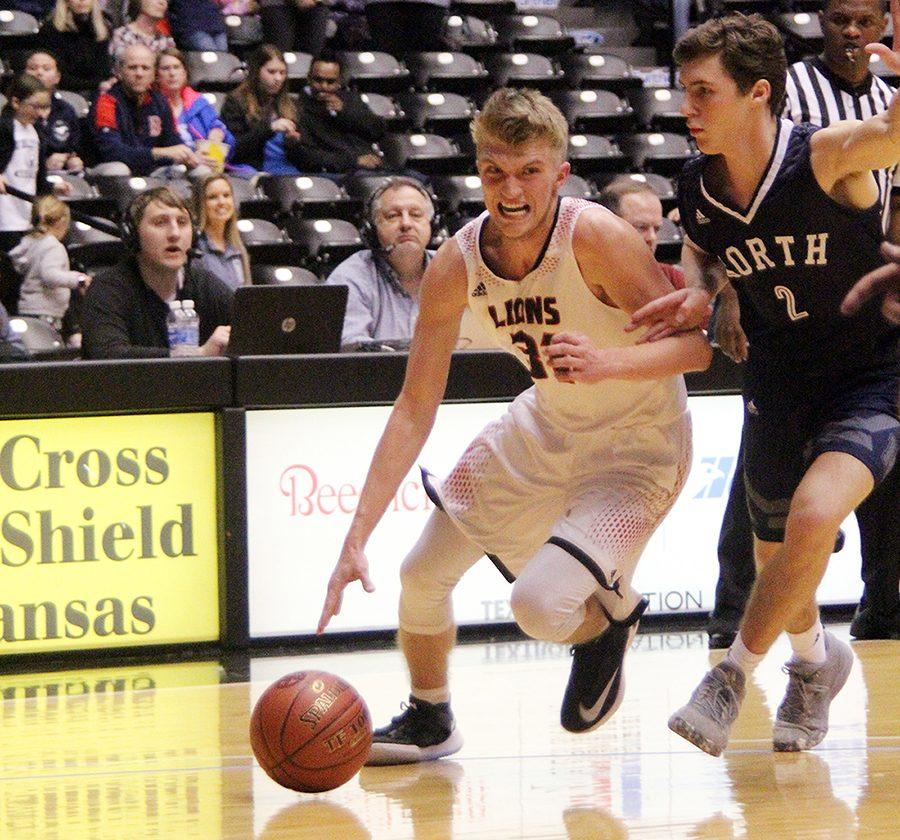 Senior Jackson Mallory drives the ball down the court during the first half of the LHS v. Blue Valley North state semifinals game Friday night. Mallory had eight points in the first half.

HALFTIME REPORT: Lions take lead in first half of semifinals

WICHITA — The Lions started the first half of the state semifinals in dismal fashion, facing a 7-0 deficit before they even touched the ball, but they fought back, leading Blue Valley North 19-17 at halftime.

After the Lions were assessed two technical fouls for pregame dunking, one each for senior Kobe Buffalomeat and junior Anthony Selden, the Mustangs made each of their four free throws and on their ensuing possession sank a three-pointer.

The Lions came into the game emphasizing keeping their cool in the high-stakes environment, and immediately responded with a  strong drive into the lane from sophomore Clarence King and big block from Kobe Buffalomeat on consecutive possessions.

The Mustangs responded by building their lead to double-digits, but the Lions continued to emphasize a strong, composed defensive presence. It came through for the Lions as they forced the Mustangs into several turnovers on what would be easy baskets, forcing two traveling violations and two offensive fouls in the first period.

After two baskets from Mallory and sophomore Noah Butler, the Lions hit their first jump shot of the night with a buzzer-beating three by King to send the Lions into the second period down 13-9.

The Lions continued their strong play in the second quarter, only allowing the Mustangs to score four points in the period, lead by the strong defensive play of Buffalomeat who had several blocks and affected numerous other shots.

After another bucket from King, who lead all scorers with nine in the first half, senior Jackson Mallory gave the Lions their first lead of the game with the first of his two three-pointers.

After battling back and forth, King, finishing on a flashy and-the-foul basket gave the Lions a 16-15 advantage.

Following another bucket from the Mustangs, Mallory hit his second three pointer of the night and gave the Lions the advantage they carried into the second half, 19-17.