Students stay inside on their way to newly-opened annex classes 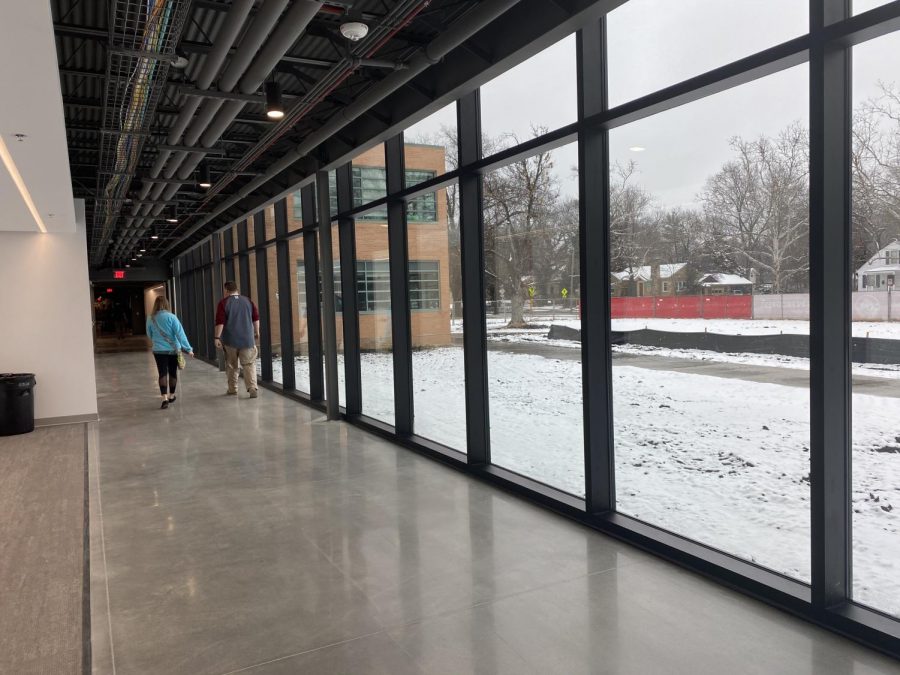 Teachers walk in the new annex hallway after school on Feb. 12. Before the connection, students had to walk outside to get to annex classes.

Stray whiteboards and chairs littered the hallways today as students began classes in the newly remodeled section of the building.

Phase two of the school’s $46 million reconstruction project connected the former “annex” building to the main building with a two-story corridor, creating space for new classrooms. All teachers will have moved into these new spaces by Thursday, with several classes having already made the transition today.

Safety being a major reason for the school’s remodel, this window-covered hallway was designed to secure Lawrence High’s campus and allow students to access all parts of the building without having to go outside.

This isn’t the first time this year teachers and students have had to transition into new spaces. A weeks-long delay in construction at the start of the school year initially forced classes into odd spaces such as the gym and auditorium before the new rooms were ready.

Autism teacher Amy Laytimi, whose new room’s windows look out on the soccer field, said she enjoys having more natural light in her room but misses being near the center of the building.

“We’re getting used to it,” Laytimi said. “The students I have are also slowly getting used to it because it’s the lights, the smells, the sounds. It’s very different, so it takes them time to adjust. I really like the new space. It’s pretty. It’s wide open.”

Several math teachers worked late to take down their old room’s whiteboards so they could be reinstalled in new rooms. One said they were making sure the whiteboards were stored so they wouldn’t be thrown away.

While some rooms, such as those designed for special education classes, have distinct sizes and furniture, most are generally uniform.

“We try to make the rooms as generic as possible because we don’t know what the program is going to look like in 15 years,” CJ Armstrong, a Gould Evans architect working on the LHS project, said during a recent tour.

Counselor Jennifer Hare spent the morning moving into room 102, which she will share with another counselor and principal as the area where student services was located is about to be walled off so construction can begin there.

Sharing the space has raised privacy concerns among the counselors. Hare noted that being able to speak privately with students is an important part of the job.

“When you’re in a big open space like that, we lose that privacy,” she said. “So we can make do by taking kids out or on a walk or just letting one person use the space and everybody else would have to vacate. So there’s things we can do. It’s just going to be a long year and a half.”

Counselors, assistant principals and members of the mental health team are expected to be displaced once more before moving into the finalized student services at the end of the remodel in 2021. Their new spaces will be in roughly the same location — near the auditorium and main office — but will look very different after remodeling.

Students on Wednesday had to get used to new paths to classes. Exterior doors outside student services, which had been the main entry point for students going between the modulars and Butler Building, were closed. The exterior pathways, lined with fences, shifted around the portable buildings, forcing students to use the building’s front doors to get between the temporary classrooms and the main building.

In addition, walls will soon go up in the area between student services and the rotunda, at the end of the second-floor math hallway, and on the first hallway between the SRO office and the old culinary room.

As these new areas have opened up, however, so have new halls connecting them, including a glass hallway connecting the science hallway and innovation corridor. Freshman Galen Dockter said he’s seen improvements in getting around.

“I think it’s pretty good,” Dockter said. “It definitely makes it easier… for transportation, getting to classes.”

Students are adjusting to other changes, too. Students in recent weeks have been asked to clear items from lockers in preparation for their removal.

While some classes must still complete the transition tomorrow, several students expressed their approval of what they have seen so far.