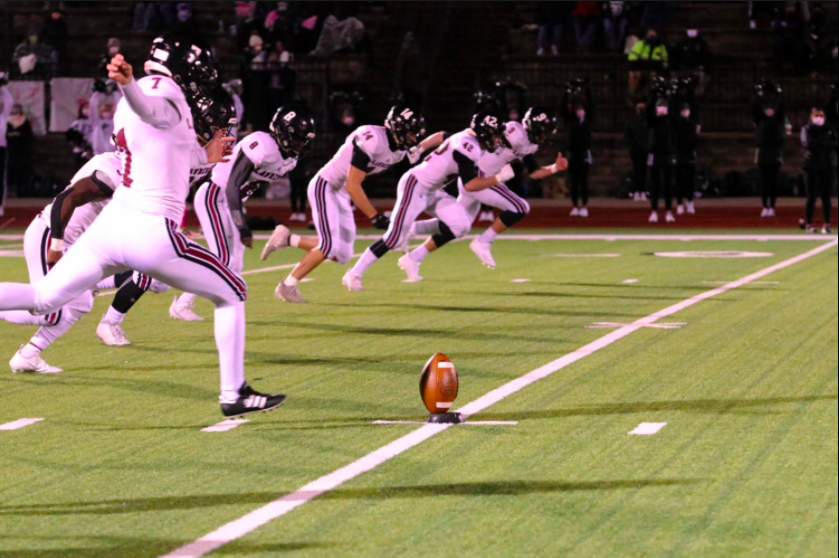 After a three year tenure in Lawrence, head football coach Steve Rampy announced on Jan.16 that he will be leaving Lawrence High School for Staley High School’s head coach position.

Rampy led the Chesty Lions to a 9-1 record this past season, including a 9-0 start before losing to Derby in the State Playoff quarterfinals. Rampy’s career record at Lawrence is 18-11.

On Monday evening, the Lawrence High Athletics Twitter account announced they have hired LHS alumni Clint Bowen. Bowen returns to Lawrence after a one-year stint as the defensive coordinator at North Texas University. Bowen graduated from Lawrence High in 1990 after playing on two state championship football teams and went on to play defensive back at the University of Kansas.

Bowen left many college offers on the table in order to accept the Lawrence job.

Athletic director Nick Wood played an instrumental role in getting Coach Bowen — who he believes is an excellent hire — to accept the position.

Lawrence football players are also enthused about the hire.

“I am very excited for the opportunity to play under such a big name coach like Coach Bowen,” junior offensive lineman Bryan Zeckser said. “From what I’ve heard about him, he is an amazing person who cares about his players. He knows what it takes to win at a high level, and I can’t wait to get started with him.”

Players also expressed interest in playing for a coach who knows the Lawrence area.

“I’m excited to see where the program can go with Coach Bowen,” senior linebacker Jackson Wood said. “It’s good they brought a familiar face at the head coaching position. Most of the seniors have played with or against his son Baylor.”

This upcoming season, The Lions looks to continue to play at a high level and compete for a State Championship.

“Winning state championships is what it’s all about,” Bowen said. “Obviously, we are going to find a way to do it the right way and teach our kids the life lessons along the way.” With Coach Bowen now in the fray, the Chesty Lions have the leadership to do just that.

The quotes from Nick Wood and Clint Bowen were reported by Shane Jackson and the Lawrence-Journal World.