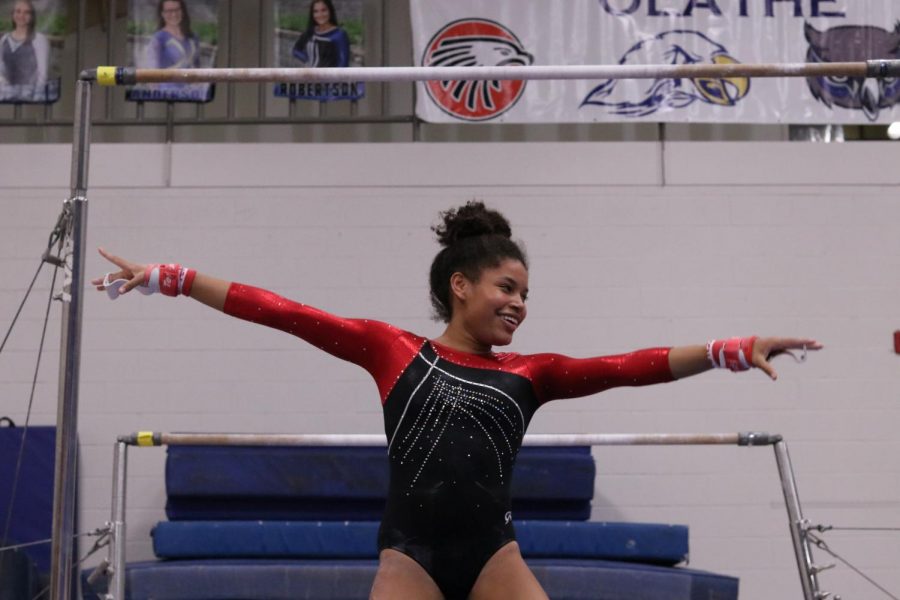 Standing steadily, junior Paris Spotted Tail finishes bars at an early-season gymnastics meet. Competitors were requited to wear masks except for when it was their turn to compete. "[The season went] good for the most part," Spotted Tail said. "I felt more confident on certain events than I did last year."

The gymnastics team’s cautious approach paid off with a full and rewarding season.

Even being considered a high-risk indoor sport, the gymnastics team managed to have zero cases. The team completed a full season, finishing off at the state championship in high spirits, with Paris Spotted Tail taking first on vault and floor.

Expectations for the season were kept low due to the uncertainty surrounding COVID. As other Lawrence High sports and activities, such as band, cross country, and football, were having to quarantine due to exposures, the gymnastics team was kept on the edge of their toes.

“I would definitely describe it [gymnastics season] as a consistent rollercoaster,” head coach Katrina Farrow said. “Even pre-season, during summer conditioning, the girls would occasionally ask ‘Coach Kat, do you think we will even get a season?’ And I would always respond, ‘With this pandemic, we have to take the whole experience one day at a time and we can’t take any practice for granted.’”

Katrina Farrow, or more commonly known to the teams as Coach Kat, is the head coach for Lawrence High and Lawrence Free State’s gymnastics teams.

“What was so amazing about it all, was that our athletes stayed valiant about mask-wearing, hand washing, sanitizing, social-distancing, etc, the entire season,” Farrow said. “And to that end, the level of appreciation that we had, to even have a season helped to keep us positive. All of the athletes worked so incredibly hard, they kept their focus and were able to compete at a very high level all season. Even up until state, we weren’t sure if we would get the chance to finish our season.”

State was held on Nov. 7 at Newton High School. Lawrence High took eighth overall, with Lawrence Free State taking first. Leading up to state, practices were held in a meet style. This helped to prepare the team and calm any nerves before state.

This meet was especially important for seniors like Caroline Dunlap and Beth Brandt..

“I think that we all were extra careful and stayed home as much as possible, because none of us wanted to mess it up,” Dunlap said.

Brandt felt proud of the team’s performance amidst the unnerving pandemics.

“I think everyone was just happy to have made it through our whole season without any issues with COVID,” Brandt said. “Everyone on the LHS team worked extremely hard and all the scores reflected that. I am super proud of everyone for staying motivated and working their hardest.”

With the state meet concluding the season, Farrow couldn’t help but reminisce about her seniors.

“Words can’t describe how proud I am of all my athletes,” Farrow said. “After this year, we won’t have two big-time seniors in our gym anymore, Caroline Dunlap and Beth Brandt. They are so much fun, they worked so hard to get to have a senior season and to have worked this hard, through so much virus stress, was a wonderful experience to be a part of. I love those girls so much and each year when you lose seniors it never gets any easier.”

Junior Paris Spotted Tail scored first on floor and vault at state. Mid-season, Spotted Tail injured her ankle.  The fact that she was able to not only compete at state, but to take first, left everyone very impressed.

“The state meet was scary, but exciting…. I get nervous in big crowds, but we had fun as a team,” Spotted Tail said. “I am proud of this season, this is the first time I got first in the state so I am very proud of that.”

This gymnastics season is no doubt very different from others and will be remembered well.

“It was bittersweet because it was an unforgettable season, and I was sad to leave my teammates,” Dunlap said. “I’m so proud of my team for all that we did this season and am going to miss them a lot next year.”