Mask rules differ depending on location for student athletes 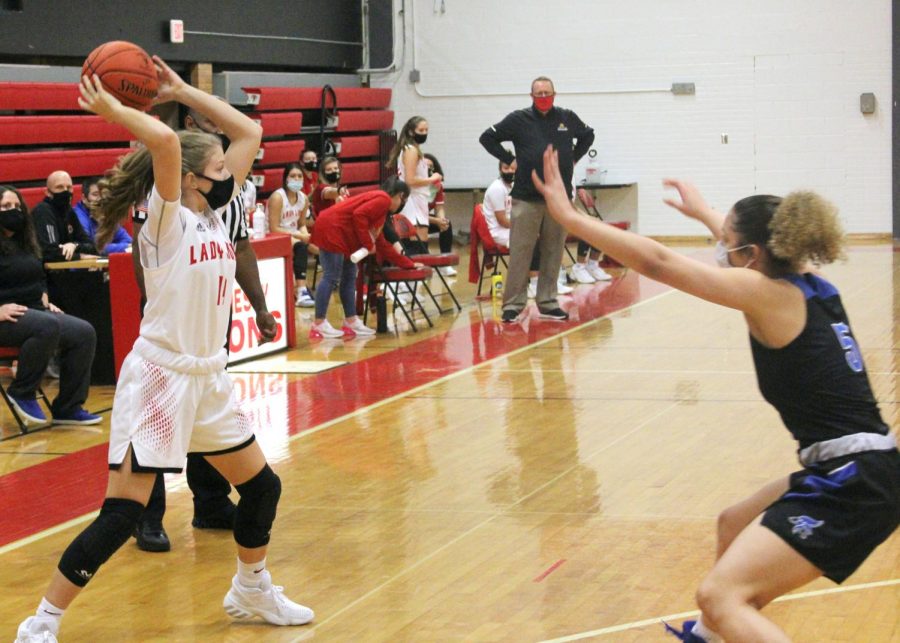 Freshmen Brecken Ostronic looks for an overhead pass in a 42-31 victory against Junction City on December 10.

When the Lawrence athletes are on the road, most will choose to take off their masks while competing.

But when they play at home, they’ll be required to wear masks. Lawrence Public Schools requires that athletes comply with local public health orders where the competition is being held. But with varying rules between counties, that guidance could mean that athletes can go maskless during competitions in counties where COVID-19 cases are higher than Douglas County. Athletes are still expected to wear masks at all times when not competing.

“We follow the mask mandate when playing at home and inform our visitors that we expect them to do the same,” said executive director of communications Julie Boyle. “The district’s practice is to comply with the local public health orders wherever the activity is being held.”

Head boys basketball coach Mike Lewis said he is following the district rules and supports his players whatever decisions they choose to make on the road.

“My views on our district making decisions related to masks, COVID-19, etc. is that I have to trust the people in those positions and understand they are in a very difficult position and that patience, flexibility and trust are important,” Lewis said.

Boys swim coach Kent McDonald said he believes if athletes have to wear masks at home, they should also have to wear them when competing elsewhere. He has safety concerns.

“I’m concerned that one of our athletes will get the virus from a swimmer outside the district and shut our program down,” McDonald said. “I’m also concerned that I might catch it from a LHS athlete who caught it at a competition out of the district.”

Since the KSHSAA decision on Nov. 24 to start winter sports on time, wrestling, boys basketball and girls basketball have all begun. KSHSAA ruled that masks only had to be worn when athletes were not competing. USD 497 is, however, complying with a local mandate that masks be worn during competitions.

Since Gov. Kelly’s mask mandate on July 3, counties that opted out have seen a 100% increase in cases per 100,000 people while adhering counties saw a 6% decrease, according to the CDC.

Kansas is currently seeing an average of almost 3,500 new cases every day and is closing in on 180,000 total cases.

Yesterday, KSHSAA announced its no spectator policy had been lifted, allowing for schools to have the option to allow up to two fans per participant. Lawrence High School plans to exercise that option. A group of physicians that advises the KSHSAA had unanimously recommended no spectators until January as well as a delayed start to the sports season — recommendations the association largely rejected.

“Since KSHSAA’s decision was just announced, we want to provide our schools time to prepare to manage spectators,” Boyle said. “Effective next week, we will allow two spectators per Lawrence high school participant, unless the size of the venue isn’t adequate to support the 6 foot distancing required by local public health orders. Spectators must wear masks.”

Douglas County is currently in the orange zone of the Health Department’s reopening guidelines, which allows for two spectators per participant.

The Lady Lions basketball defeated Junction City High School on Thursday night at home, and the boys team is set to take on Grandview High School this Saturday at Blue Valley.

“At the end of the day, I want what is best for all of our Lawrence Public School kids,” Lewis said. “I just keep on keeping on and do the best that I can and follow all the rules given to us.”