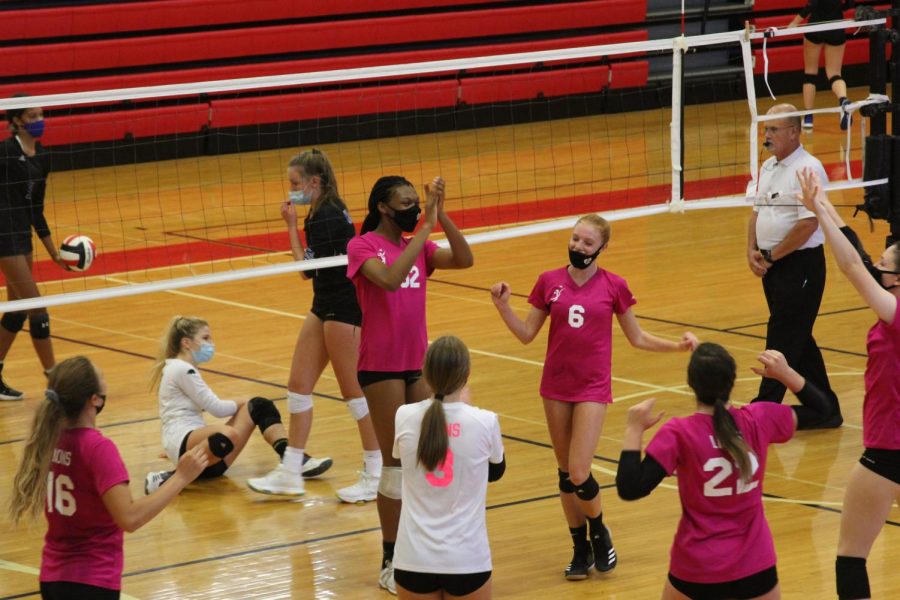 Players celebrate on the court after scoring a point on their opponents in a home game.

The LHS volleyball season was anything but normal for this year’s team.

From quarantine due to COVID-19 to the uncertainty of whether players would be able to have a season, many factors let to unusual times.

“I think a high for me was just getting the opportunity to play during my senior year,” senior Hadley Bird said. “At the beginning of the season, when a lot of other schools weren’t practicing yet, we didn’t know how many games we would get to play.”

Not many high school senior athletes across the country envisioned this was how their final season would turn out.

“I used to talk to Hadley [Bird], Amaya [Harris] and Ozi [Ajekwu] about our senior year and none of us imagined it like this, but I think all of us would say that because of COVID we grew closer together,” senior I’yawa Brewer said. “I am grateful for a season, however, as it could have been worse by us not having a season at all.”

Most players agreed with Brewer, who was a team captain alongside Bird. This season along with its ups and downs had forged this team into a family, most of their favorite parts of the season were just the fact they were together playing the sport they loved during this tough time.

“The best times honestly were just going into practices and seeing everyone,” junior Emily Silvers said, who’s hoping to make it even deeper in the playoffs next year. “No matter what kind of day I had, everyone puts a smile on your face, and I was able to focus and forget the chaos of school.”

Volleyball was an escape for team members, who stayed positive and determined until their season ended.

“At sub-state we played the best we have ever played this season, and it was nice to know that we lost giving the best we could,” Silvers said.

Team captains Bird and Brewer led the Lions to a final record of 15-17, ending in a loss during Sub-State, but not before knocking off a No. 1 seed in the playoffs.

“We were always there for each other, on and off the court,” said coach Stephanie Scarbrough. “We understood and respected that we were given a gift being on the court together each day.”

All of the coaches knew how important this season was, not just for playing volleyball, but also the human interaction.

“This was a fall of social isolation. For many of our players, the only peers they saw outside of Zoom or WebEx were their teammates,” assistant coach Lori Stussie said. “They had to lean on each other for friendship and support when they felt down. Each player took precautions to stay healthy, not just for themselves, but for their teammates and coaches.”

Both Scarbrough and Stussies are proud of their seniors and knew they had left their mark on the program.

“One of our struggles year to year is believing in ourselves and expecting to go the extra week into State every season,” Scarbrough said.  “This team, and this program, expected and worked so hard every day because they held themselves to high expectations.  I look forward to next year because I believe the 2020 program has left a legacy of belief, hard work, focus, and expectation.”