Winter sports to begin with limitations 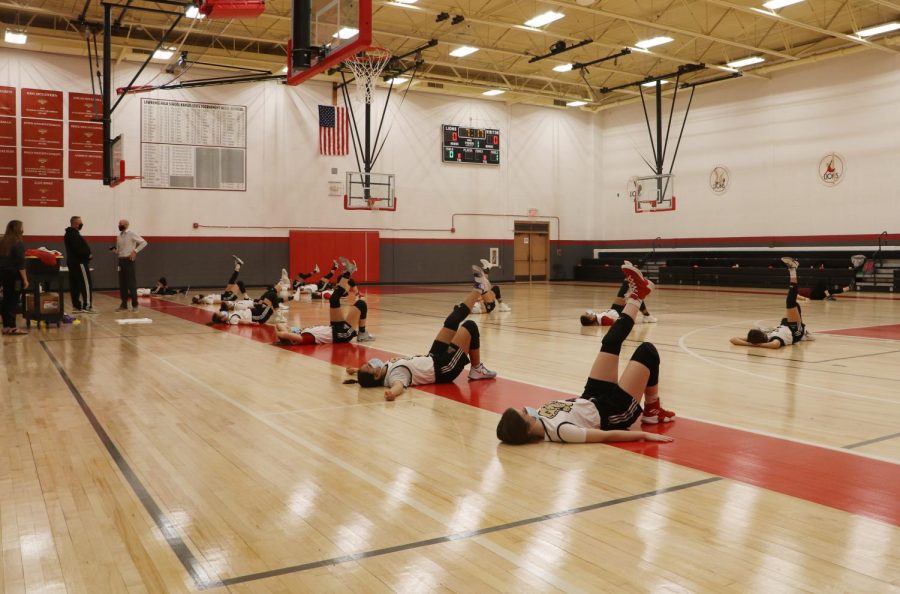 Members of the girls basketball team warm up at a distance while wearing masks after school. The Kansas State High School Activities Association is allowing the season to continue with a few limitations but opted against most drastic limits in games.

By Andrew Phalen and Cuyler Dunn

Winter Sports are set to begin on time, albeit with multiple changes from a traditional year, following the Kansas State High School Activities Association’s board of directors meeting last week.

The board rejected some of the most restrictive measures that had been recommended as COVID-19 cases surge to record levels across the state and sports move indoors where concerns about spreading COVID-19 increase. However, the board accepted some limitations. Among them, KSHSAA will extend the winter moratorium from practices Dec. 23 to Jan. 7 and require participants to wear masks when not competing. Fans will not be permitted to attend until Jan. 28. But competitions will begin this week instead of being delayed until Jan. 15.

“When I heard, I was actually really surprised because I didn’t think they were going to let us play,” said junior basketball player Pearse Long.

Senior wrestler Zachary Razak was glad that KSHSAA decided not to postpone, worried that it would have limited options going forward.

“I’m glad that they ruled to continue as normal,” he said. “It’s smarter to have a season that is flexible rather than continue to postpone or cancel a season and then try to put something together last minute.”

Senior guard on the basketball team Zeke Mayo was ecstatic to have the ability to play and showcase the team’s hard work for this season.

“My reaction to KSHSAA’s decision was pure joy,” he said. “They decided to allow us to play our full schedule and that’s all we wanted. I think with the group of guys we have, we can be really good, and we have the chance to showcase that now.”

The decision to not allow fans came as board members expressed concern about moving too far away from the recommendation of physicians advising the organization. Multiple proposals had already been amended to allow for more games during the winter, raising concerns among some members.

“Let’s not forget, those are the recommendations by the doctors and by the sports medicine people,” said Tim Bumgarner, from the Heart of America league. “We’ve backed away from that already. So opening up and having fans, were backing away from that even further. We backed off dates for when we are having competitions and now we’re sliding back again.”

Board members maintained worries of continuing play with COVID-19 numbers in Kansas continuing to worsen and multiple holidays approaching with the possibility to worsen conditions more.

“We’re hitting Thanksgiving time, too, not just Christmas,” Rebecca Morrisey said. “We have another superspreader right now, and we’re already in a bad place.”

They worried that allowing fans so close to the holidays, with the possibility of increased community spread, could be disastrous for the sports season.