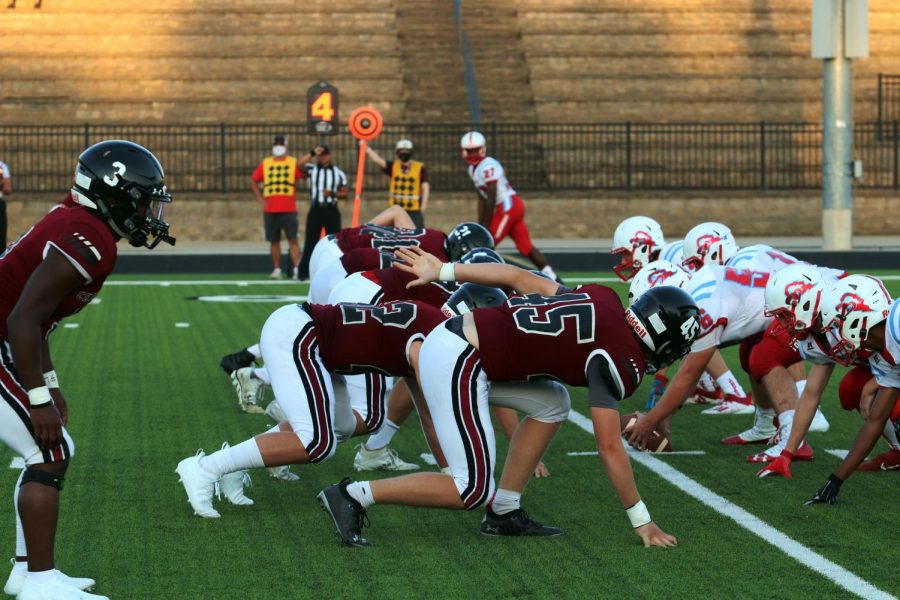 The Lions defense prepares crowd to blitz Shawnee Heights' offensive line in front of a sparse audience prior to the snap on Friday night. The defense successfully held their opponents scoreless in a 53-0 blowout win.

By Andrew Phalen and Cuyler Dunn

Lawrence High School’s football team wasn’t the only thing that returned Friday night, but also a small sense of normalcy to the LHS community during a scary COVID-19 pandemic.

The Lions defeated the Shawnee Heights Thunderbirds 53-0 on Friday night led by senior running back Devin Neal’s three touchdowns and 189 yards as well as a strong pass rush by seniors Preston Greenwood, Jack Stoll, Teagan Flynn and the rest of the LHS defensive lineup. The defense held the Thunderbirds to -58 rushing yards in the first half and only two yards of total offense through two quarters. The Lions’ big win capped off a night many had been waiting on for months.

The first big moment came on only the second play from scrimmage as senior defensive back Corban Oberzan intercepted a Shawnee Heights pass from 16 yards out and ran it back to put the Lions up 7-0. The play signified the start of a season the players had been longing for but feared may never happen.

“It meant everything to show everyone and to prove that we wanted it bad,” senior Jeremy Jacobsen said. “Nothing will stop us from getting what we want.”

The offense was led by Neal and senior quarterback Jackson Dooley who threw for 199 yards and two touchdowns. Backups took over their roles for the second half.

“The defense did a great job of getting us a good lead early and the offense was executing pretty well for the first game,” Dooley said.

The game was open to two spectators per player, which allowed many students, staff and parents to experience their first LHS event in months. Although fans were allowed, limited capacity rules meant that the student section and band were not in attendance.

As the whole world is continually affected by COVID-19, Lawrence has seen many events canceled or delayed and many seniors lose their final chances to participate in a multitude of activities. With every day throwing the future into uncertainty, having the seniors be able to play even one game together meant so much to so many.

Chesty Lion fans were overjoyed with the result of the contest but many were simply happy to be there at all.

“It was amazing being able to do it with my family and finally be able to go to war with them,” Jacobsen said. “Couldn’t ask for anything more.”