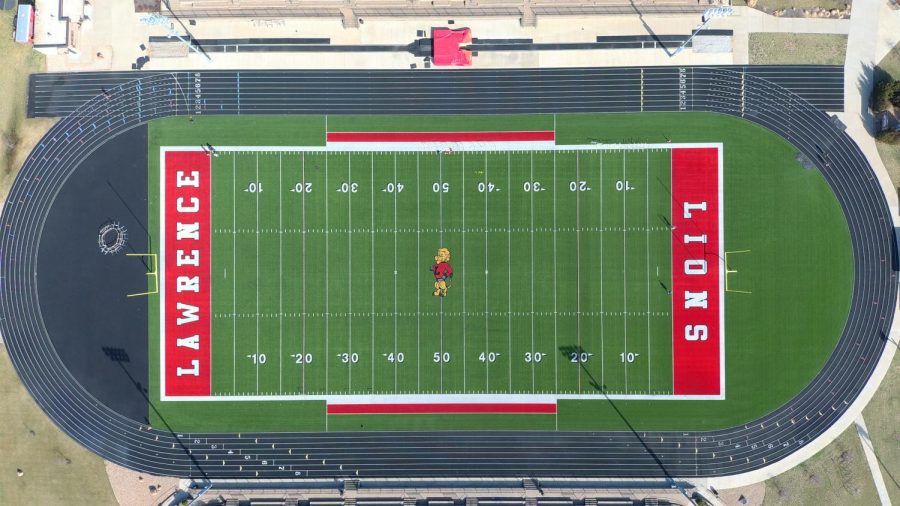 The football stadium is empty again after player tests positive for COVID-19, temporarily pausing the season for the team. The photo was taken during spring break week in March.

By Cuyler Dunn and Andrew Phalen

Summer conditioning was canceled for all sports on Monday and today, the Lawrence High athletic Twitter announced on Sunday night.

The cancelation comes amid rising rates of coronavirus infections although the announcement didn’t state why practices had been canceled. Workouts began on June 15 for all fall sports athletes — the first time athletes had been on campus since schools closed in March. Plans for the rest of the week are to be announced this afternoon.

The cancellation was surprising for athletes who felt they had just begun their return to sports.

“I was bummed that it was postponed,” junior cross country runner Jack Ryan said, “but hopefully we can get back out there and start running again soon.”

Some athletes also felt reassured about the safety precautions taken by the district in order to keep students healthy.

“Hearing that the workouts are canceled for a couple of days is actually a little reassuring knowing that the LHS community is putting their athletes and coaches safety first and taking the safety precautions needed,” junior volleyball player Gianna Cooper said.

The start of summer conditioning was delayed, as many sports choose to use Zoom as a way to connect and get in shape for upcoming seasons. As athletes transitioned back to in-person workouts, many were uneasy due to the changing circumstances.

“It was a combination of both, definitely mixed feelings,” Cooper said. “I was really excited to start exercising again as the Zoom workouts for volleyball are just not the same as having your coaches and teammates around you. But since I hadn’t worked out for awhile, I was a little nervous I’d be out of shape.”

“Just recently the LHS workouts started on campus and there is a whole system of signing in and answering a short questionnaire regarding our health before each session and always a constant reminder of keeping our distance from one another, ” Cooper said.

Although the workout schedule continues to change for fall athletes, they maintain a positive focus on their upcoming seasons.

“We will just have to work hard on our own until we can run as a team again,” Ryan said.

The shifting schedule for training comes as the Douglas County Health Department last week said the county would stay in Phase Three for reopening following an increase in local cases. The county has had 102 total cases, including 11 new cases since Friday. High school-age students have been impacted with 14 cases among those ages 10-19 in Douglas County.