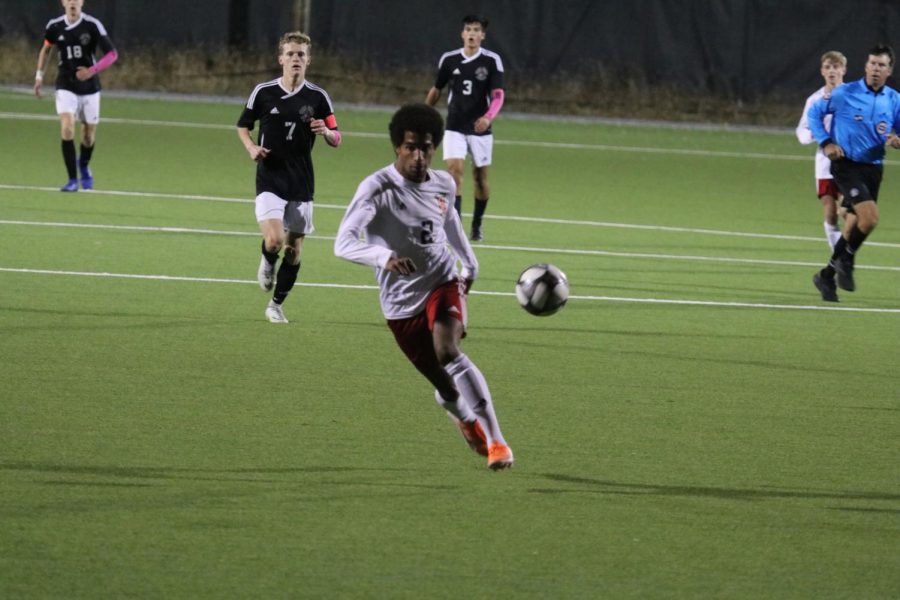 Strong defense by both sides left the Chesty Lions and Firebirds with a 0-0 stalemate at last night’s city showdown.

The team’s similar strengths, and strategies, left them evenly matched in score after going to a second overtime. The Lions hold onto their 5-5 season record with now a third tie game.

Both the Lions and Firebirds ran a defense-heavy 3-5-2 formation featuring three defenders, five midfielders, and two strikers. That alone ensured the match would be a defensive showdown – and it was.

The defense of Alex Stark, Tanner Glanton and Peyton Mallory played as expected, locking down the usually dominant Firebird strikers. In the second half, the Firebirds appeared to have an easy open net to shoot at. Until Alex Stark jumped in front of the shot and barely made a goal line save with his head.

The Free State game proved it is hard to get past the footwork and defensive smarts of midfielders like Matteo Kalusha-Aguirre. The Firebirds made it hard to move forward, however.

“Our main midfielders were struggling to get up because we had to stay so defensive,” Kalusha-Aguirre said. “We couldn’t get many opportunities.”

Where the Lions have found success this year is in their speed coming from players across the field. Lions strikers, Mason Anderson and Kanak Masten, kept the pace all game. However, the Firebirds main strong-suit is also their speed, which kept offensive players from breaking out for any big plays. This led to the only scoring opportunities coming from inside the box, corner kicks, or from forcing an outside shot.

On the rare occasion of an opening for the Firebirds, sophomore goalie Grant Glascow was already prepared before Free State even had time to shoot. After going down in the second half, Glascow came up slowly with a limp. For the remainder of the game, he could not take another goal kick. That did not stop him from keeping the Firebirds scoreless for the rest of the half and the two overtimes that followed.

The Lions have proved this year time and time again that their speed and defense is hard to beat. With a team featuring plenty of young stars, that legacy will likely continue in the upcoming years.

Daniel Davidson contributed to this story

Goals For before Free State: 19

Goals For after Free State: 19

Goals For before Free State: 23

Goals For after Free State: 25