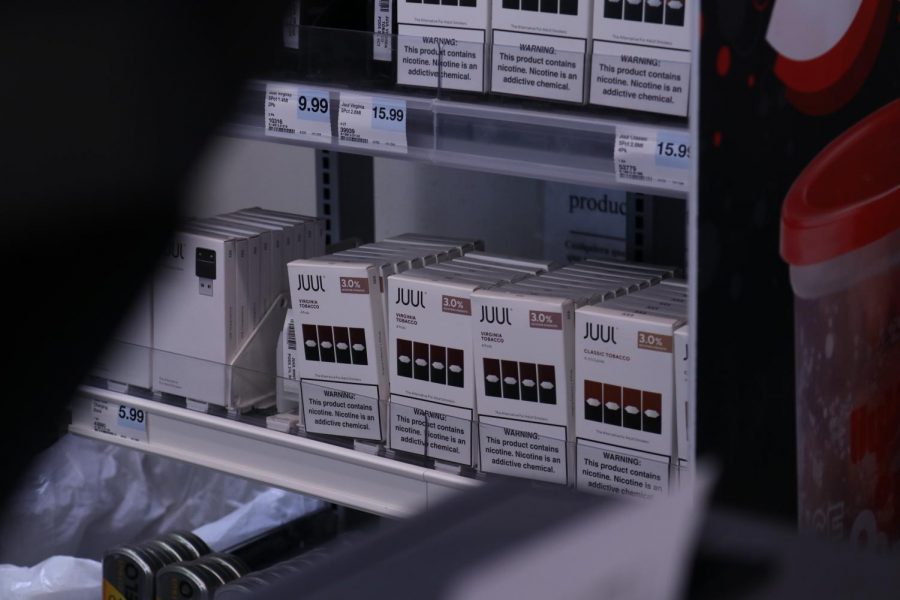 The ban, announced in January, restricts manufacturers such as JUUL and NJOY to tobacco and menthol-flavored pods. Flavors like lemonade, mango and blueberry can still be found in e-liquids sold at vape shops, as well as in disposable single-use vapes such as PuffBars.

Along with the Dec. 20 law making tobacco and nicotine purchasing age 21, this ban aims to curb rising rates of youth vaping.

Lawrence-Douglas County health promotion specialist Sarah Hartsig believes the exceptions to this ban mean it will do little to that goal.

“Because it was so narrowly focused on pod-based systems, and because it excluded mint and menthol, I think that we will see more product switching than anything else,” Hartsig said in an email to The Budget. “But as it is, the current federal flavor legislation is not enough to be meaningful.”

Tobacco 21 law, however, is something Hartsig advocated for when she spoke to the Lawrence school board in September about the health impacts of vaping. Prior to the federal age change, the school board had sent two separate letters to the city commission in support of such legislation.

Nineteen states and Washington, D.C. implemented tobacco 21 prior to the federal ban.

“It is a policy that has been proven to be effective in communities elsewhere in the U.S.,” Hartsig said. “Of course, it matters how well it is enforced and whether the retailers are aware of the law.”

According to a study by the Institute of Medicine in 2015, raising nicotine purchasing age to 21 would prevent an estimated 200,000 plus premature deaths for today’s teenagers.

“One interesting point that was made by one of my students,” Green said, “was to raise the legal age to 25 because 18-year-olds can still buy these products from 21-year-olds. Less likely from a 25-year-old.”

With both the announcement of the 21 law and flavored-pod ban, initial details about enforcement and regulation from the Food and Drug Administration were scarce.

On the state level, the preexisting enforcement mechanism for tobacco products is annual compliance checks, where underage individuals will be sent to a selection of vendors and violating retailers are fined.

Hartsig said Kansas is revising its enforcement strategy when it comes to underage nicotine sales while locally DCCCA runs a “reward and remind” program.