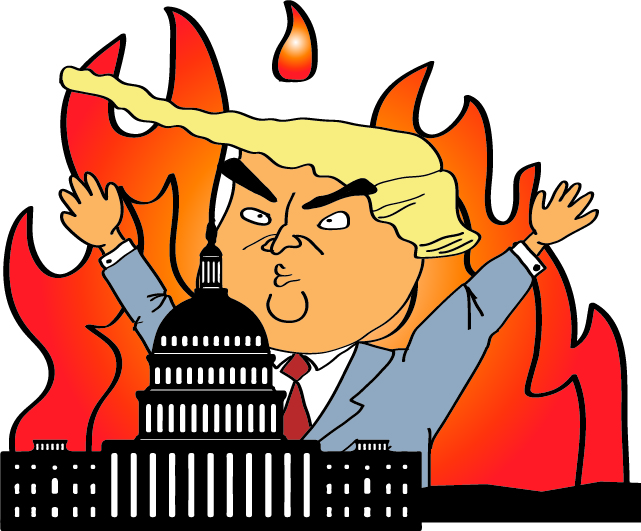 President Donald Trump looms over the United States Capitol building with a wall of fire. Supporters of Trump led attacks on this building today during proceedings to finalize 2020 electoral college votes.

By Kenna McNally, Editor-in-Chief of the Red & Black Yearbook

I am terrified for the future of America as I watch people violently breach the Capitol building. I struggle to comprehend why this is happening.

The election process is one of the oldest institutions in America, and it should be respected whether you got the result you wanted or not. Losing an election should not result in hijacking the United States Capitol.

Yet that’s what happened today as Congress took on its responsibility to finalize the election results. Protestors — egged on by Trump — stormed the Capitol. Breached the chambers of our lawmakers. Weakened our country.

Donald Trump’s behavior is despicable. He encouraged these attacks through false claims that the election was stolen from him and pushed his supporters to organize protests that quickly became violent. Claims that the 2020 election was fraudulent are simply false. They have time and time again been disproven.

The people of America will forever be changed by the words and actions of Trump and his allies. They have spent years attempting to brainwash supporters into developing a victim complex that has led to this horrifying act of violence against our democracy. Trump’s presidency has left an ugly stain on the American people.

Like others my age, I do not know what a normal presidency looks like. I was too young to remember much of the Bush or Obama administrations. We are left with a generation of Americans influenced by the words and actions of a wannabe dictator.

Despite Trump — or perhaps because of him — I am quite involved in politics. I am the vice-chair of Kansas High School Democrats. While I have believed engaging in the process will lead to a better future, I have seen countless young people begin to feel that there is no hope in politics and that nothing will ever change for the better. Previously I have argued to these people that the only way we can bring about fundamental change is by participating in the system, even if we believe the system is deeply flawed.

Today I am discouraged. I feel that no matter how much work we put in to cause positive change, there will always be others there to tear it down.

Today was supposed to be a day of celebration for many Democrats – the finalization of Biden’s victory and the projected wins in Georgia that would result in a Democratic majority in the Senate. For all Americans, it should have been a demonstration of the strength of our democracy. However, the actions of extremists – arguably terrorists – have turned this day into a day of horror.