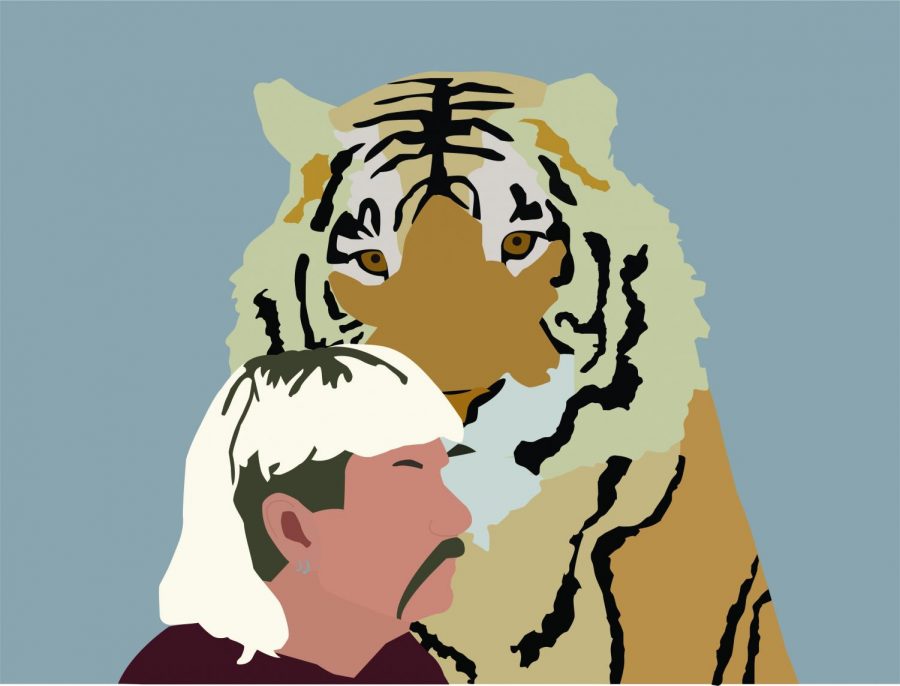 Tiger King: Murder, Mayhem, and Madness is nothing short of its name.

A phenomenal docuseries made over the last 5 years couldn’t come at a better time. School is cancelled, and everybody is stuck at home without anything better to do because of the coronavirus pandemic.

Staying in your house for 24 hours can be very boring, especially if this lasts for the next few months. What better way to stay entertained then to turn on your TV and open Netflix?

Tiger King has exploited this better than any other show could. Exploring the world of private big cat owners, the docuseries focuses on one zoo operator, Joe Exotic. Not only is he a big cat owner, he’s also a country singer, tv personality, and failed politician. His cult of personality reflected in the show has sent shockwaves throughout American culture, and no one can stop talking about how wild the show is.

But with great power comes great enemies. Carole Baskins, an animal rights activist and owner of Big Cat Rescue, wages a war against Joe Exotic and all private big cat owners. The highly complex story draws attention not only to legal battles between the two, but also plots of extortion, fraud, and even murder. The show even prompted a Florida sheriff to reopen a cold murder case from the 1990s.

The show simply does not miss. Video compiled over the last 30 years gives us an intimate look at the making of their world. Each individual is highly complex, and their stories don’t fail to humanize each one of them. However, as personalities continue to conflict with each other, it’s insanely hard to tell what is true or not, and who is in the right.

One thing isn’t debatable. The cats are the losers in this fight. The fact that there are only 4,000 tigers in the wild compared to 5-10,000 in captivity in the United States will leave you speechless. The uncertainty of how many are in captivity is shocking enough. The show hammers this point hard. No viewer can finish the show not feeling bad for the big cats.

The show is phenomenal. Not only is it entertaining, but it’s also informing and persuading, and its cultural importance can’t be understated. While the shock value takes a lot away from the story, the show lives up to most expectations. I would recommend it to anyone who has the time (and who doesn’t?).