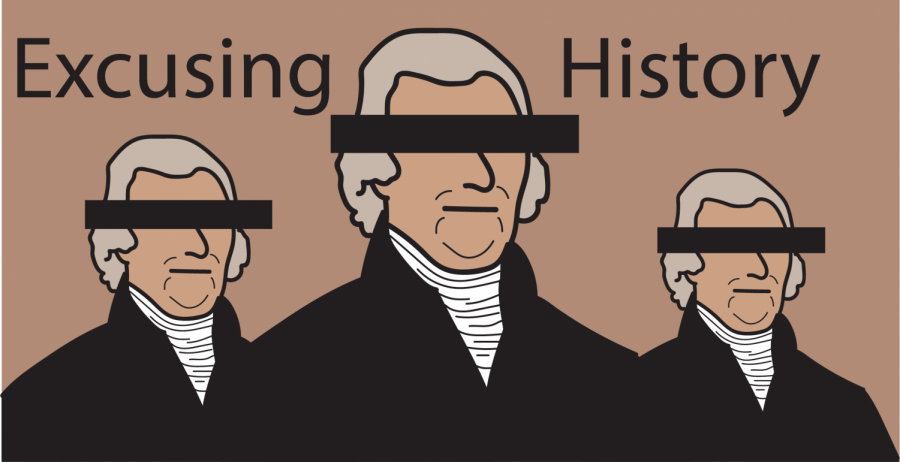 Although the founding fathers of America are usually seen in a positive light, we can't forget their ugly histories

It’s the role of historians and journalists to create a vivid and well-rounded picture of the events they are describing.

Often times, when we seek to highlight and share the accomplishments of certain influential people within our nation’s history, we are quick to excuse or downplay narratives that might put a blemish on the “hero” label that we have ascribed to them.

Yet this sort of excusatory mentality is not only pervasive, it’s also dangerous.

When we don’t recognize our historical leaders as whole people — with many strengths and many faults — we fail to do our job. We create perfect human beings who never actually existed, and portray a false sense of reality. It’s unfair to justify the evils done by our forefathers by putting their accomplishments on a pedestal. We must describe their actions — good and bad — with the same gravity. Otherwise we are not presenting the evidence fairly.

One of the greatest examples of this is American icon Thomas Jefferson. He is idolized because of his famous words that “all men are created equal, that they are endowed by their Creator with certain unalienable Rights, that among these are Life, Liberty and the Pursuit of Happiness.”

Even so, Jefferson was a slaveholder, whose livelihood was rooted in the subjugation of hundreds of human beings, including members of his wife’s family and his own. He didn’t believe that all were created equal. He was a racist, incapable of rising above the thought of his time and place and willing to profit from slave labor.

Thomas Jefferson didn’t achieve greatness in his personal life. He had a slave as mistress. He lied about it. He once tried to bribe a hostile reporter. His war record was not good. He spent much of his life in intellectual pursuits in which he excelled and not enough in leading his fellow Americans toward great goals by example.

Jefferson knew slavery was wrong and that he was wrong in profiting from the institution, but he didn’t have the courage to lead the way to emancipation. He thought abolition of slavery might be accomplished by the young men of the next generation. To be a slaveholder meant one had to believe that the worst white man was better than the best black man. If you didn’t believe these things, you couldn’t justify yourself. Jefferson could condemn slavery in words, but not in deeds.

At his magnificent estate, Monticello, Jefferson had slaves who were superb artisans, shoemakers, masons, carpenters and cooks. But like every bigot, he never said, after seeing a skilled African craftsman at work or enjoying the fruits of his labor, “Maybe I’m wrong.” He ignored the words of his fellow revolutionary John Adams, who said that the Revolution would never be complete until the slaves were free.

Yet he is loved, commemorated and admired for the famous words that he wrote, words that he didn’t even follow in his personal life.

We cannot continue to allow these influential figures to remain untainted by the wrongs that they have committed, especially as we fight to expand our knowledge of the past, and to diversify the sources that we use to describe events. It is truly important that we work to look to find new voices rather than celebrating those that do not deserve it.