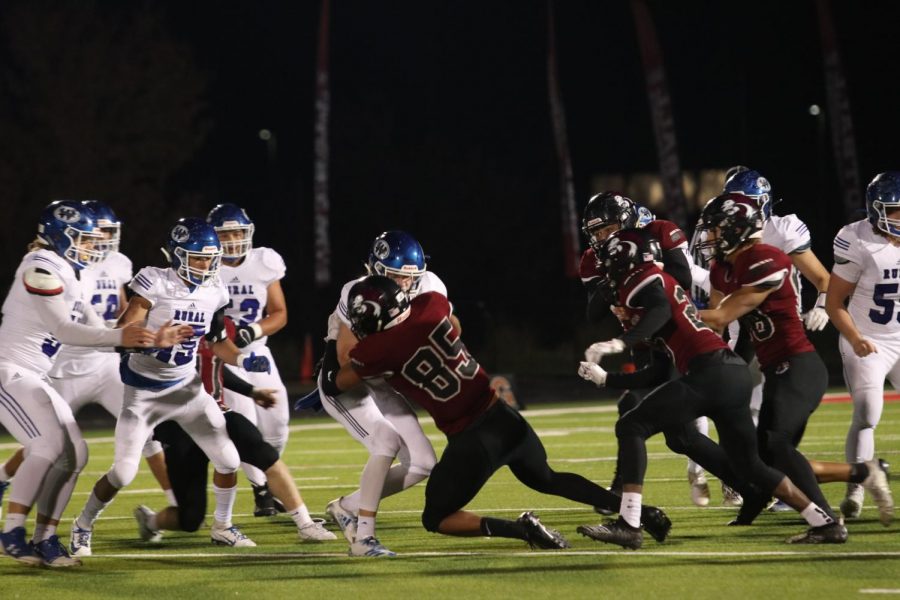 This Friday, the Lawrence Lions football team won round one of the state playoffs against the Washburn Rural Junior Blues with a final score of 38-21. The Lions handled Washburn Rural with a series of great plays, coaching corrections and special teams play.

Throughout the game, junior quarterback Jackson Dooley was hit with a number of helmet to helmet hits that often looked unnecessary. Receiving dirty hits can often psych out quarterbacks making them “see ghosts” or anticipate harder pressure than there actually is. For example, many quarterbacks could think that the pocket is collapsing and force plays that are not there. Not Dooley. Dooley seemed to be unaffected and continued playing top level football, making the correct defensive read and precision throws to give the Lions key first downs.

The Lions also excelled coaching-wise, making adjustments to get and keep the lead for the majority of the game. The game started in disaster with the first play from scrimmage for the Junior Blues ending in a 60+ yard rushing touchdown. After that, the Lions were dominant on the defensive line, stopping what looked like every rushing attack for short yards or loss of yards. The Junior Blues were then forced to abandon the run leading to forced pass plays. The Lions coaches were quickly able to notice the shift for Washburn Rural from rushing to passing and adjusted to rack up plenty of sacks or stop the quarterback for only short runs.

The Lions also won the game on special teams play. For one, the Lions kick off defense was able to stop returns close to the end zone leading to the Junior Blues needing to put together drives that could sustain the whole length of the field, which often lead to punts inside their own end zone. The quickness of the Lions punt blockers caused hurried punts that would barely make it to the 40 yard line. On kick return, the Lions were able to amount to good returns that set up good field position for the offense allowing them to open up the playbook and attempt more plays.

Next week, the Lions will travel to Topeka to face the Topeka High School Trojans who are coming off a round one win against Garden City last night. Topeka will prove to be a tough game for the Lions as the Trojans are led by senior quarterback Devonshai Harden who this past March committed to Kansas University and running back Ky Thomas, the all time career rushing yardage record holder for Topeka, who committed in March to the University of Minnesota. Although, Topeka is only 1-1 against teams that are still in the playoffs, compared to the Lions which are 3-1.

The Lions hit on all cylinders today. Despite Dooley being shaken up, he still could make throws that senior wide receiver Chris McGee could haul in for long touchdowns. Often in drives where it looked like not much was going to happen, junior running back Devin Neal would use his superb acceleration to break out in a long gain that made it easier for the offense to score on the next set of downs. The Lions continue to impress and will hopefully keep showing what they are capable of for the rest of the state playoffs.