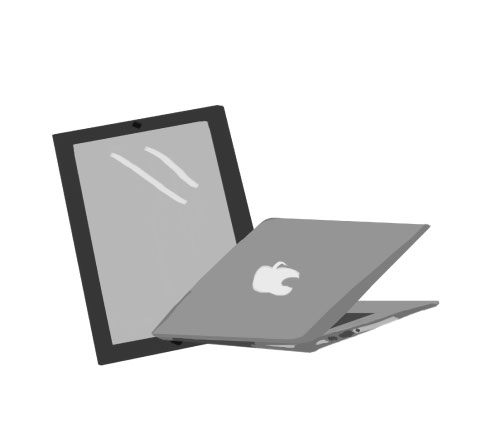 As the industrialized school system finally catches up to the society surrounding it, the district has begun looking at its options for going one-to-one with devices for students.

The decision will ultimately lie within the parameters of what the district can afford to do, but many students are pushing for Macbook airs, like the ones in blended classrooms, as the device provided to high school students.

The idea that most districts have when going one-to-one is that textbooks will be online-only from then on, cutting costs in that part of the yearly budget. As someone who learns best in a very old-school way – meaning lectures and physical texts – the idea that all of my classes would then be blended is dissatisfying.

On top of students exhausting their eyes with chapters of texts – sometimes spending up to two hours straight doing notes – the light from a computer screen only intensifies the work that their corneas are enduring.

And, as someone who wears bifocals, having to physically move my head up 90 degrees to read the screen in between jotting notes down is more than inconvenient.

Beyond that, studies have shown that reading comprehension is lower and can be significantly lower when information is read in an online text. The information can stick even less in the long term when it comes to taking notes on a computer as opposed to in a notebook.

Instead of a forced one-to-one system, students should be given the choice between a standard textbook and online texts.

One of the models being considered was implemented in the Shawnee Mission district in the fall of 2014, though initially only about a third of elementary schools were supplied with iPads for every student while all middle schools had one iPad for every student and high schools one Macbook Air per student.

This option would be nice but would be stronger if it included an opt-out with a number of physical texts available. Or, an option to have a physical text for home while using classroom laptops to access the texts at school.

Where ebooks feel more appropriate in college settings, as the information in them can be edited and updated by the publishing company, the loss of portability is not worth it. Additionally, a computer costing upwards of $500 feels like more of a liability than a $100 textbook.

Advanced as technology is, devices still die and internet connection to update or download texts is not omnipresent.

This year’s shift to more online text reliability felt like yet another misstep in the way our district but more importantly our school has handled technology this year. Our reliability on services like Skyward has resulted in more chaos than was projected or needed.

Most importantly is the simplicity of the idea that many students cannot and will not be able to learn effectively with online texts, and for that reason physical texts should not be carted away so quickly.