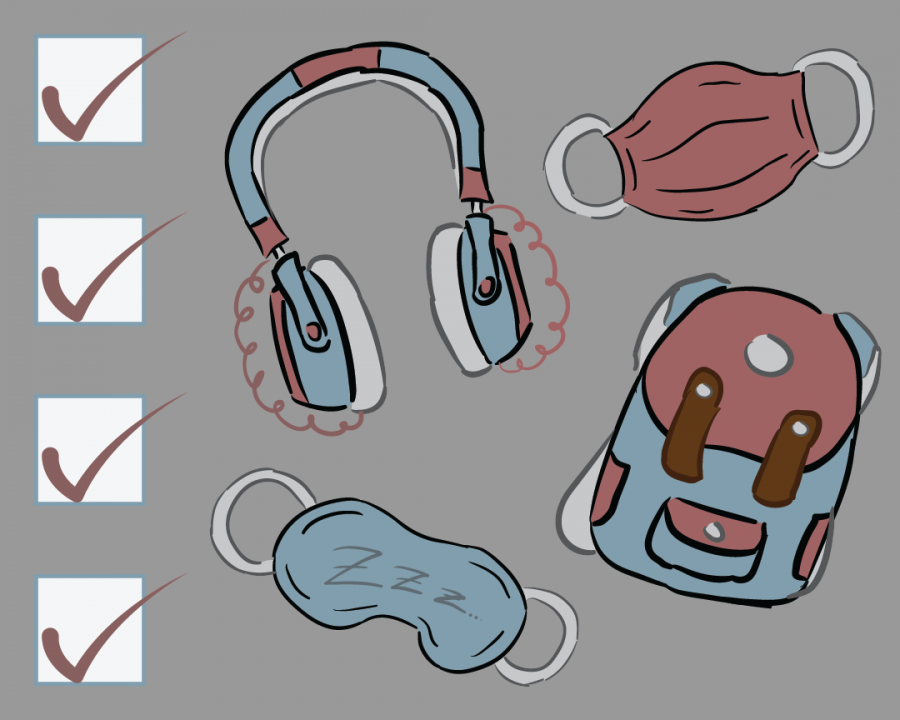 Students should be sure to bring necessary items when working in the commons.

As part of the remodel, Lawrence High school implemented the new Learning Commons as a place for students to work outside of the classroom.

Although the original intent of the space was to give students an area for group work, it has been repurposed for students opting for hybrid learning to have a place to attend classes in which the teacher is completely virtual or virtual for that day.

Cassidy Rubisoff is the paraeducator assigned to oversee the commons.

“I think Tuesdays are always the busiest day,” she said. “I usually see my room completely full multiple hours of the day. Capacity is 17 people including myself, so I have 16 tables in there.”

It often varies how frequently students are required to use the commons. Many instances happen when a teacher is exposed to COVID-19 and is forced to quarantine at home.

“It depends, one teacher I have is fully remote so it’s every hybrid day for that class,” senior Amy Manning said. “But other times it is just when a teacher has been exposed and has to stay home. I only had three teachers in this situation first semester and those times only last a week or two depending on when the exposure happened.”

Senior Bella Kirkwood said that the process of entering and exiting the commons was difficult when trying to stay six feet apart.

“Personally I don’t like being in the Learning Commons, it’s just strange because there’s a bunch of people all spaced out and it’s completely silent,” Kirkwood said. “Plus the whole signing in thing is annoying. Don’t get me wrong — it’s 100 percent necessary. It just takes awhile because there are so many people.”

It is difficult for students who might feel uncomfortable participating vocally in their classes while in the commons. Senior Amy Manning said she is less likely to participate while in the Learning Commons.

“It’s very quiet in there,” she said. “I hate to use this example, but like, when kids come in, some of them will talk, but a lot of them are very quiet in general and many are very timid. In class, I don’t want to say they are not participating per say, but very quiet in class as well. Maybe they feel like they can’t talk. I’m not sure.”

Bella Kirkwood, a senior, says she feels like it would bother other students if she unmuted and spoke during class.

“I am definitely not as active during class because the earbuds that go into my computer don’t have a microphone, and even if they did, I wouldn’t feel comfortable saying anything because I don’t want to disrupt anyone else,” she said.

Manning said the  six-foot distance recommended by the CDC is not always kept in the Learning Commons.

“We try to maintain a distance, but it gets hard when we are all signing in or leaving at the end of class because everyone still tries to go out the door at the same time sometimes,” she said.

Use of the commons has changed to accommodate COVID-19 regulations.

“When I took over in the learning commons the classroom size was around 25,” Rubisoff said. “We then realized that we couldn’t fit that many people in there so then they came in and spaced things out.”

As for COVID safety protocols, Rubisoff said that while sanitizing is kept up, the room can get uncomfortably full.

“I feel like we do the best we can at Lawrence High as far as cleaning tables and sanitizing,” she said. “We use whatever we have available to keep it clean and sanitized. I will say that the room sometimes gets pretty full, but I don’t know, it definitely feels uncomfortable sometimes.”