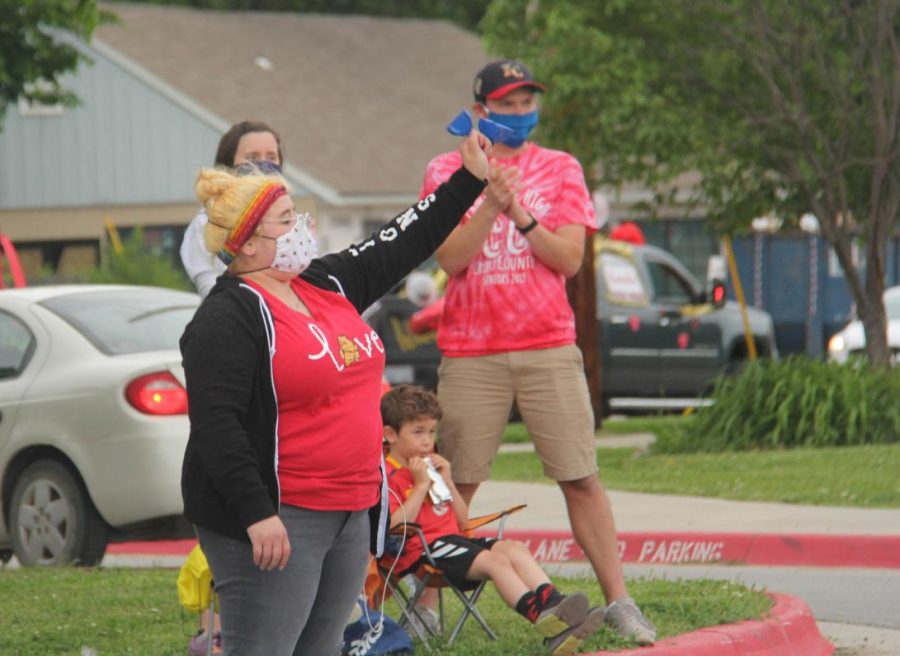 English teacher Abby Hoffman waves to students from a distance during the Celebrate the Date in late May 2020.

Abby Hoffman, an English teacher at Lawrence High School, contracted COVID-19 during the summer of 2020.

It started with what appeared to be a simple sinus infection and escalated to a six-day hospital stay from July 10-16.

“The easiest thing to say is that it was the worst experience of my life,” Hoffman said. “It’s really cliche to say, but it was life-changing.”

Though Hoffman has no clear confirmation on how or when they got COVID, but they have a theory.

“Talking with my infection specialist, my doctor, we were backtracking, and I went to Arizona for a week, but the only thing I did that was out of being cautious was traveling to Arizona on the plane,” Hoffman said.

During their stay in Arizona, Hoffman and their partner were careful about the time they spent in public to avoid infection.

“I made sure we weren’t going anywhere populated and if so, I was like, ‘I’m not going to go, I’ll stay here,’ and even then I still got it,” Hoffman said. “I was very mindful of what I was doing, and I still got it.”

About 15 days after returning home, they began experiencing symptoms, which showed up later than is usual. Hoffman began experiencing headaches and fatigue and a week later, on July 10, they were admitted into the ER with blood oxygen levels below 95 percent, the minimum to be considered safe. At the time of admission, their levels were at 70 percent.

During their hospital stay, Hoffman was given chest x-rays, blood work tests, Nitroglycerin to prevent chest pains, multiple medications in an attempt to make them feel stable, and the COVID sinus test. After moving to an ICU unit, Hoffman’s room was filled with nurses taking care of them, bringing meals and inserting blood thinners into their stomach.

“My sleep schedule has been completely erratic since having it,” Hoffman said. “My doctor thinks that it’s specifically towards my stay because when you’re in the hospital for a long period of time you get into a cycle of not sleeping all the way through.”

Hoffman received support from their family and loved ones. Their nieces and nephews would frequently send sweet videos or messages. Their partner was with them throughout the whole experience, as much as he could within the safe parameters, putting on a strong face for Hoffman.

“My partner and I live in a very small six-hundred-foot house, so I really couldn’t do the recommended of being in another room and using my own bathroom,” Hoffman said. “We have one bathroom that is the size of a broom closet.”

Their partner had to quarantine for a total of 28 days.

“His didn’t start officially until mine ended, so I think he got the worst of it all in terms of anybody else,” Hoffman said.

While quarantined, Hoffman and their partner stayed completely at home. They were fortunate enough to receive aid from running friends, Lawrence Education Association friends and colleagues from work. From having groceries delivered to being gifted money for take-out or sending food, Hoffman and their partner found it heartwarming that their friends were willing to help.

Jeannie Merritt, an English teacher at LHS, was one of those friends who helped out during Hoffman’s quarantine.

“I know they would do what they can to help out me and my family,” Merritt said. “I wanted to do the same thing. That’s just what you do in this community.”

Merritt helped from afar, demonstrating her support and love by picking up and delivering groceries, snacks or food.

“During this time, you can’t go visit someone in the hospital, but you can reach out via text/phone call to help break up the boredom and isolation,” Merritt said

Back in July, when the virus was still relatively new, many of Hoffman’s friends were surprised at the fact that someone they personally knew got COVID-19.

“It was a real wake-up call about how this virus can impact anyone, not just the elderly or those who have other medical conditions,” science teacher Lisa Ball said.

Months after having had COVID-19, Hoffman in an October interview described still experiencing long-term effects, such as shedding hair to cold fingers and toes, still feeling weak, and even some possible cognitive delays.

“When I’m talking, I might slur some words together, forgetfulness in terms of spelling or everyday words,” Hoffman said, which was out of the ordinary for them. “Also pronouncing multisyllabic words have been kind of hard. There’s not a direct connection for it, but I’ve been reading some studies that have shown that.”

With so little knowledge about how the virus and its antibodies manifested after already having been infected, Hoffman feels more at risk than they did before. With no signs of feeling “back to normal,”  Hoffman worries about what may happen to them next.

“I haven’t been able to run since June and that tears me up inside,” Hoffman said. “If I can’t do the things I love without getting winded, how is my body going to handle a sickness coming back?”

In that interview around the time the district transitioned to hybrid instruction, Hoffman said they felt afraid. Having been alone in a hospital room, they hoped no student ever has to live through a situation like that or worse.

As much as they understand that students require certain resources that can only be provided in person, Hoffman fears that with more students and faculty in the building, as time goes on and people become accustomed, people will begin disregarding safety guidelines.

“The more we try to treat this like our old pre-COVID normal, guidelines get pushed to the side,” Hoffman said.

The financial aspect is also a cause for concern. Back in the July 27 district board meeting, Hoffman initially spoke to the board members on their experience with COVID-19.

“The claim for my six-day stay was $37,000. I’m very thankful for insurance, and I do stay in that privilege. I acknowledge that,” Hoffman said. Hoffman went on to recognize that that is an “uncanny” amount of money, an amount which some families may be unable to pay.

Ball agreed with Hoffman about finances and hybrid.

“I am really scared for our community because Mx. Hoffman had medical insurance but many of our families do not have the same access to health care,” Ball said in October. “I do not agree with the board’s decision to bring students back into the building right now, but I will do my best to help them stay safe and to protect myself.”

Hoffman urges that our community take this seriously. As safe as they were during the summer – keeping logs of everywhere they went, running with a mask on, washing their hands and thoroughly cleaning, Hoffman was still infected with the virus. Hoffman believes our community and our district have to be extremely prepared. They hope that personal protective equipment will be available to every person in our community like childcare workers and teachers.

“We need to be over-prepared going into the school year, not scared, but just prepared,” Hoffman said.