Sophomore gymnast makes herself into a state leader 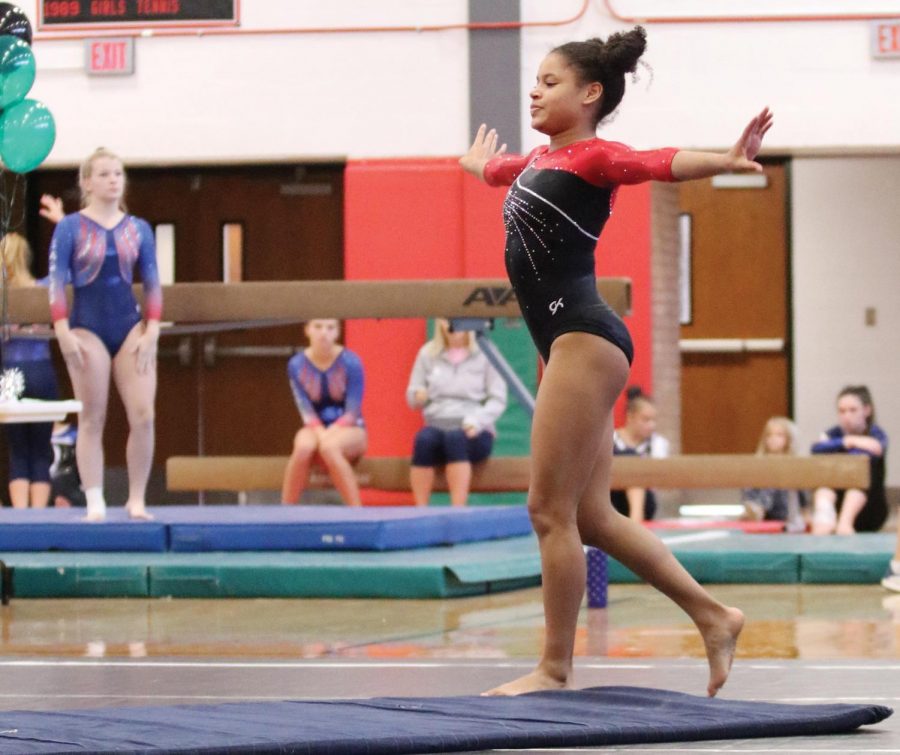 Arms outstretched, sophomore Paris Spotted Tail performs her floor routine during a September home meet. Spotted Tail finished floor with a score of 8.95 to claim her second place spot. An overall gifted gymnast, Spotted Tail said she was especially invested in floor. “I love it because I get to dance,” Spotted Tail said.

Paris Spotted Tail is no stranger to the podium. Vault. Bars. Floor. Whatever it is, she excels.

Through work ethic, athleticism and leadership, Spotted Tail has made herself into one of the best gymnasts in the state. All while being a sophomore.

Spotted Tail’s love for gymnastics started when she was 4. Watching her sister’s gymnastics practices inspired her to join the team at the Lawrence Gymnastics Academy as quickly as possible.

“I don’t really remember much,” Spotted Tail said. “But my sister told me I would always try and go out to the big floor with her and tumble because I just loved watching her.”

Last year, Spotted Tail began her Lawrence High School gymnasts career with almost a decade of gymnastics experience under her belt. But she still didn’t know what to expect.

“I was really nervous because there was Eden [Kingery] and Josie [Hickerson] on my team, and I was kind of intimidated by them,” Spotted Tail said.

The nerves started to fade as the season went on. Spotted Tail quickly recognized her place on the team and started to stand out at meets.

“High school gymnastics is vastly different than club gymnastics,” said head coach Katrina Farrow. “It takes quite a recognition and shift mentally for any incoming freshman that is new to the team and the program. What is not common is how well Paris adapted and how well she was able to fit right in.”

Spotted Tail’s success in meets made it clear early on that she would be competing in the state meet. Expectations for her were high. But Spotted Tail was still just a freshman. A lot of work had to be done.

Leading up to the state meet, Spotted Tail and the gymnastics team worked harder, day in and day out. No time for messing around. Practices were longer. Team members attended open gyms at the Lawrence Gymnastics Academy. The grind was on.

“I had no idea how I was going to do because there were a lot of juniors and seniors that have been doing it and had a lot more experience,” said Spotted Tail.

But when she found out the results from state, she was shocked. Second on vault. Seventh on bars. Second on floor. Seventh all around. As a freshman.

“I was so excited,” Spotted Tail said. “I was not really expecting that, especially on floor, I love floor. I think I got second on floor, and the person that beat me was a senior.”

Fast forward a year. Spotted Tail enters her second year on the LHS gymnastics team. Knowing expectations are high after her strong showing at state. In her second year, she knew she was going to have to step into a leadership role.

“Whenever any of us are nervous or in our heads, she’ll just be like, ‘Hey, you got it,’ ” said teammate Caroline Dunlap, a junior.

While Spotted Tail issues encouragement to the team, leading by example took her impact on the team to the next level.

“She is a quiet leader who leads by her actions,” Coach Farrow said. “Paris is always early, and she is almost always the first person out there as soon as warm-ups start.”

Spotted Tail took a step up her sophomore year. At the state meet this year, she performed even better than her freshman year, placing top 20 in every event and getting fifth overall.

The future looks bright for Spotted Tail. She hopes to do well enough to do gymnastics in college.

“She is definitely one of the top gymnasts in our region, and everyone is excited to see how she will do,” Farrow said.