Aside from a few small delays, the mostly finished, school-wide revamp has students learning in a brand new, integrated building 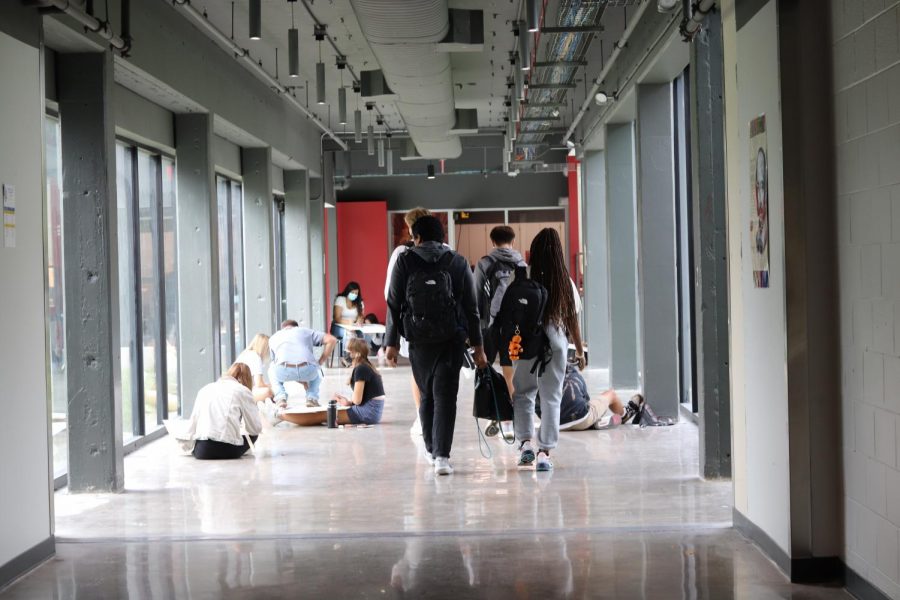 Students walk through new hallways while other students work on projects.

After nearly two years of teaching and studying in a construction zone, staff and students are finally settled into a brand new building.

Nearly every aspect of the building has been updated and remodeled. New learning labs and breakout rooms litter the hallways, most classrooms have Apple TVs, gender neutral bathrooms are no longer an afterthought and the hallways are soaked in sunlight let in from floor to ceiling windows.

“I definitely like the layout more now,” senior Alyssa Barger said, “because of how open it is, and the glass brings in a lot of light.”

Before the remodel, there were three separate buildings, unused atriums, massive differences in room sizes and many more functional issues. These issues were the result of a poor attempt to accommodate the growing student population.

“I just remember the hallways being filled with lockers,” senior Dominic Esparza said. “The school looks so much better than it did.”

The goal of the project was to bring the school together into one building and make it a functional learning space. There were many obstacles and years of work, but the final touches are coming together.

The project was predicted to be finished by August 2021 and the construction team was close to this goal; however, with delays in the main gym and furniture deliveries, the project is likely to end in October or November 2021.

“I’m looking at October, end of October, before we have ninety-eight to ninety-nine percent of it done,” vice principal Quentin Rials said.

The only things that are holding back completion are certain furniture deliveries and the main gym floor. Besides those small delays, the school now has matching floors and carpets throughout, freshly painted walls, up to date technology and a brand new feel. Now, the room numbers all flow in the same directions, the annex is connected to the main building and the CTE rooms are no longer an afterthought. The building now has a well designed layout and one unified look.

“I went to Lawrence high, I graduated in 1995 and a lot of it looked the same,” Rials said. “So it’s unrecognizable besides some areas of the main gym and west gym.”

The only space that will not get a massive overhaul is the west gym. The pool was in a dangerous amount of disrepair and most of the west gym budget was sunk into getting it up to code.

“There comes a point in time where you can only do so much and unfortunately, the bathrooms are pretty expensive,” lead architect CJ Armstrong said.

Despite the setbacks, and unfinished west gym the school is much better. The portable classrooms, butler building, rats, bats, cockroaches and mystery sludge in the English halfway are yet to be missed.

“The building was quite outdated, there was bricks, there was leaks, rats in the annex, there were even bats,” Barger said. “So I think them updating it was very needed.”