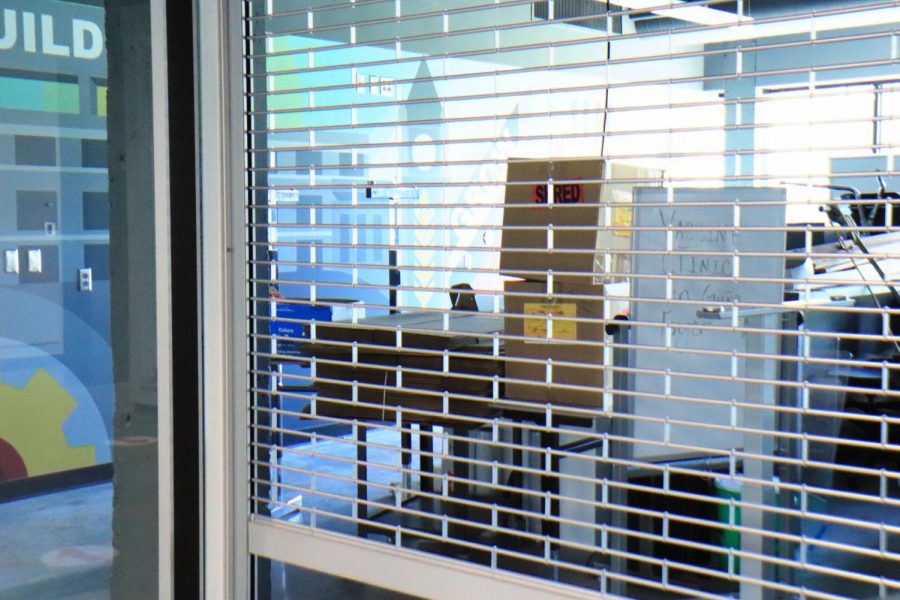 Belongings are barred away to prevent thefts in the wake of the 'devious licks' TikTok trend.

All but three school bathrooms were closed this afternoon and school administrators were pleading for a stop to thefts in the wake of a viral TikTok trend.

A detour sign from another school. Security cameras. A piece of turf. In the world of “devious licks,” nothing is safe.

The viral trend has taken schools across the country by storm. It stems from a video made of a student stealing a wall hand sanitizer that garnered more than 2 million likes on the social media platform TikTok.

“First of all, it’s frustrating,” said teacher Jeffrey Lyster. “Because it feels like we’re back in school for the first time in 15 years, and we’ve come back to a building that’s close to being finished, and the first thing that happens to it is it gets desecrated…I hate how negative behavior is not confronted, not only by adults but also by peers.”

Among LHS students, one of the first incidents occurred when students took a “detour” sign from a high school in a different city and brought it back to LHS. It appeared in the LHS parking lot shortly after.

This started a trend of students taking whatever they could from school bathrooms and hallways. Some are turned into videos hoping to go viral while other students quietly open their backpacks to show others what they stole.

“I was one of the first in it, and I saw a lot of people stealing stuff and taking big microscopes from a science class,” said one student who, like others in this story, asked to remain anonymous. “Now they try to hit a lick on anything that they can find.”

Even the cafeteria isn’t safe, as students have taken tongs and ketchup containers during their lunch hours.

Another student bragged about a trend that’s becoming costly for the school.

“I got to be the lick master, I just want to do it,” the student said.

The student stated they had stolen a patch of turf, a bottle of chemicals, hand sanitizer dispenser and a piece of the roof.

Some students have kept the items as trophies, while others have sold them. Students have reported witnessing live auctions on buses.

Following the influx of stolen property, Principal Jessica Bassett sent an email to LHS students, staff and parents encouraging them not to steal from the school.

“Schools across the country, including schools in our district, report vandalism and thefts as part of a social media challenge that encourages students to film themselves or other students vandalizing school restrooms and post the videos online,” she said in an email.

She outlined disciplinary procedures for anyone caught stealing or vandalising.

“Consequences may include parents/guardians being responsible for restitution for property damages,” she said. “In addition, students who record, post, or share videos of such behavior may face disciplinary consequences. Our school will report theft and property damage to law enforcement.”

Today during third hour, most bathrooms and locker rooms were locked in order to prevent more damage.

But many students have not been deterred and don’t understand they could face criminal charges.

“If they catch me I don’t really care, I’ll just give the stuff back,” a student said. “It’s not that big of a deal to me.”

Nobody knows what items could be targeted next. One student was asked what their plans were for future thefts.

“Right now,” they said as they jokingly grabbed an eight-foot piece of PVC pipe.

Administrators have begun cracking down on the trend, but for now, security cameras and soap dispensers remain a rarer sight at LHS.

Following the incidents, the administration sent out an email to parents, students and staff implementing changes to school policies.

Beginning Friday, Sep 17 students will be required to have a pass anytime they leave the classroom and only one student will be permitted to go to the bathroom at a time.

Students will also be required to eat lunch only in the designated areas of the cafeteria or outdoor courtyards in order to maintain enforcement of school COVID-19 policies and keep the school clean.