Updated data shows USD 497 could have moved to remote-only learning this week. 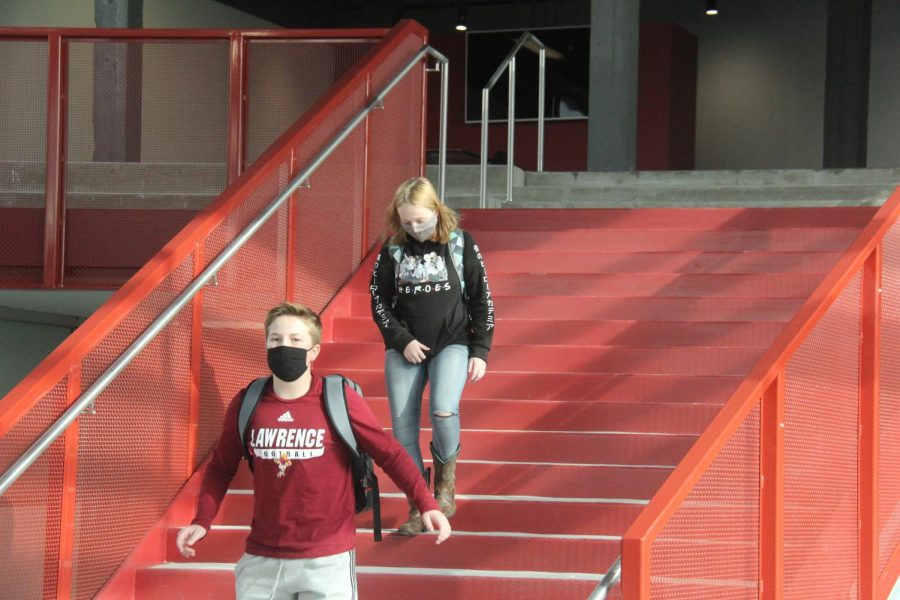 Students descend the newly installed learning stairs on Jan. 7 on the week day back from winter break. In-person learning continued this week despite escalating numbers of COVID-19 cases in the community.

“My hope is that this can get straightened out so that the data is reliable and educators and school families can trust that the gating criteria that are released on Thursdays are up-to-date and accurate,” said Lawrence Education Association Interim President Lindsey Buck.

Last month, USD 497 adopted the new gating criteria with the hope that including incidence rates would better reflect the spread of COVID-19 within the community. The new system balances several factors, most heavily weighting the two-week cumulative county incidence rate and the trend in county incidence rate to determine whether or not schools are closed.

Sonia Jordan, director of informatics for the Lawrence Douglas County Public Health Department, explained that the incidence rate is a way to determine the severity of cases in the county. It takes the number of newly reported cases over two weeks and shows the number of cases per 100,000 people.

“This allows for an easier comparison, especially between two different places or groups,” Jordan said.

But issues appeared last Thursday when the district reevaluated what phase of opening it should be in. The district remained in phase yellow, which allows for hybrid instruction at all levels.

Even as cases were surging in Douglas County, KDHE data last week reflected declining cases in the county. Updates to numbers for that same time period now reflect an increasing rate of cases. That factor alone would have moved USD 497 secondary students into remote learning, according to the district’s formula.

The KDHE numbers for last week were not only out of date, but were also lower than those reported by the Lawrence Douglas County Health Department. Health department senior analyst Dee Vernberg said the reason for the differences in numbers comes from the ways in which each organization calculates incidence rate. KDHE calculates its data using more recent days, which Douglas County excludes out of concerns that it won’t yet be able to have a complete tally of all the recent COVID diagnosis. Douglas County excludes the three most recent days of data in its calculation while KDHE excludes two.

“In our experience, given the time it typically takes for cases to be routed to us, allowing for three days gives a more complete picture of the numbers,” Vernberg said. “Otherwise, we believe the numbers for the most recent three days can be artificially low and affect the incidence rate because the data could be incomplete at that point.”

According to the USD 497 executive director of communications Julie Boyle, district administrators are using the gating criteria and data collection methodology adopted by the school board.

“Lawrence Public Schools is using KDHE as the source for incidence rate because LDCPH was not reporting this data when the Lawrence Board of Education adopted KSDE’s gating criteria in December,” she said in an email.

Because the county public health department wasn’t reporting incidence rates , the district only had the option to use data provided by KDHE. KDHE media officer Kristi Zears said delays can also result depending on how quickly data about positive tests are processed and entered into the EpiTrax system.

This incongruence in data is worrisome for many. School board member Shannon Kimball said that the board may have to review the issue.

“Perhaps we need to revisit at the board level and have a discussion about what the district’s approach is going to be to that data when this sort of thing happens,” Kimball said. “We may need to have that conversation so that the public hears what the plan is. With all of the other challenges we don’t need to have the additional challenge of further eroding people’s trust because we look like we’re cherry picking data. The data is the data, and if there’s problems with it, we need to be upfront about it.”

Buck said several teachers told her they were alarmed by the discrepancies in information.

“We know that as new data from the county goes to the state, they update their numbers,” she said. “They updated data on Monday and changed our incidence trend from two previous weeks. Those previous two weeks changed from decreasing to increasing with the new data. So from what I can tell, it appears that if KDHE’s data was up-to-date last week when our district pulled the data, it would have had us in the increasing category (as it reflects now), which means we might have been placed in orange this week instead of yellow.”

Kimball said a lack of uniformity in how information is gathered about things like the incidence rates makes the work of public officials more difficult.

“In the bigger picture, one of my biggest frustrations with all of this is that there’s no uniformity in anybody’s systems about what data and how you report the data,” Kimball said. “It’s all just everybody’s doing whatever, which makes it so difficult to accurately compare what’s going on in one place with what’s going on in another place. I attribute that to the multiple levels of failed leadership in a failed response from the federal government on down. There’s so much discrepancy from one data set to another, from one agency to another, it just makes it really hard.”