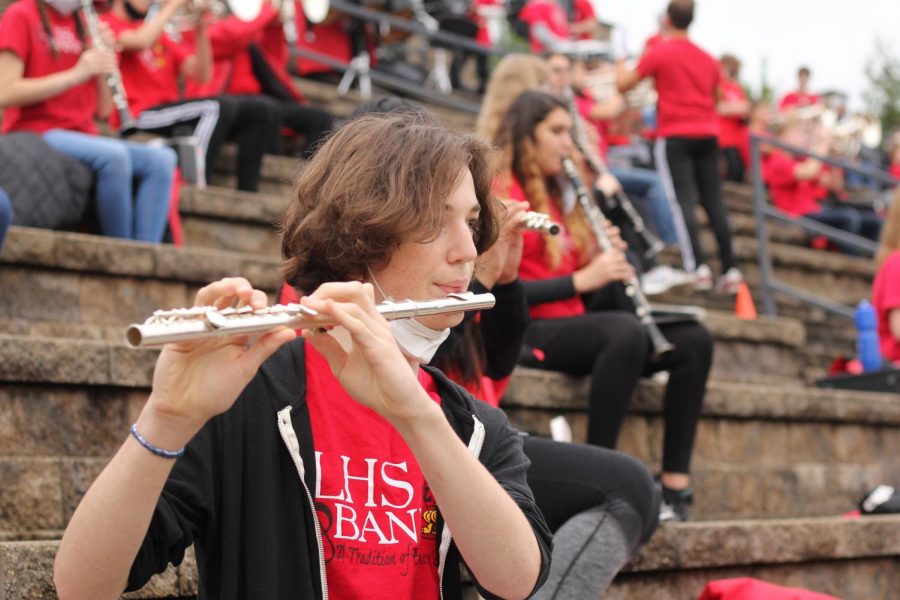 Getting the crowd going, sophomore Milo Bitters and the rest of the band play songs to cheer on the football team during a September game. Having been stuck inside for months, football games and band practices were a good change of pace. "The best part of band this year was just getting to see friends," he said.

While the COVID-19 pandemic has affected everyone, some activities in particular are having to completely change the way they function this year.

Activities such as band, orchestra, woodworking, and ceramics typically need students to be together in-person in order to participate. As this unprecedented school year begins, these classes have had to entirely change how they work in order to accompany social distancing guidelines. Both the online and hybrid models pose challenges for classes. One of these affected classes is choir, which has had to alter the way it works because students can no longer gather together in large groups to sing.

“While everyone is doing everything they can, online learning has meant many of the opportunities choir used to be able to provide are no longer available,” senior Ian Snyder said. “Concerts are difficult to plan while still maintaining social distancing and the district and state choirs are going to look very different.”

Even with the difficulties presented to classes like choir, teachers are still finding ways to engage students that best they can. Choir is using a program called Smart Music, which puts music online for students to access.

“That said, by utilizing online tools such as Smart Music, the choirs have still been able to work in the hopes of putting on a concert, however it may look,” Snyder said. “While trying to sing in a choir online has been difficult, the new resources have given us new ways to improve our singing, even if we can’t hear each other while doing it.”

As the choir has continued to learn new music, online learning continues to provide limitations that are hard to overcome, even with technology.

“The inability to sing in a group has definitely made things harder,” Snyder said. “Not being able to hear the other parts to blend and balance with them makes singing my own part harder. Hopefully, as the year goes on, we’ll be able to find new ways of overcoming these challenges. Until then, being able to use Smart Music has made music far easier to learn on my own, and the ability it gives Dr. Dunn to evaluate us individually has been extremely useful.”

Band is also experiencing similar problems. The fall is marching band season, students have still been practicing on the field as much as they can.

“There obviously isn’t as much playing as there would be in person,” senior Raef Landes said. “But there are still practices held twice a week which are very crucial right now, because not many people are playing that much outside of that.”

Although the band continues to practice, they still face many technological challenges during everyday classes.

“Basically everything requires less work, but it’s more tedious,” Landes said. “Just the process of taking role every day online, and working around technological errors while submitting videos would all be way easier if it were in person.”

Music classes aren’t the only classes having to alter their curriculum. Art classes and other hands-on courses are having to adapt to the online format.

“Photography online has been and felt more like an independent study,” senior Ryleigh Leon said. “We’ve been doing most of the assignments outside of class.”

Online learning has posed challenges, not just for course curriculum, but also mental health for students.

“It’s been hard to self motivate,” Leon said. “It’s also just so much more screen time because you spend so much time editing and uploading photos on top of the regular school day.”