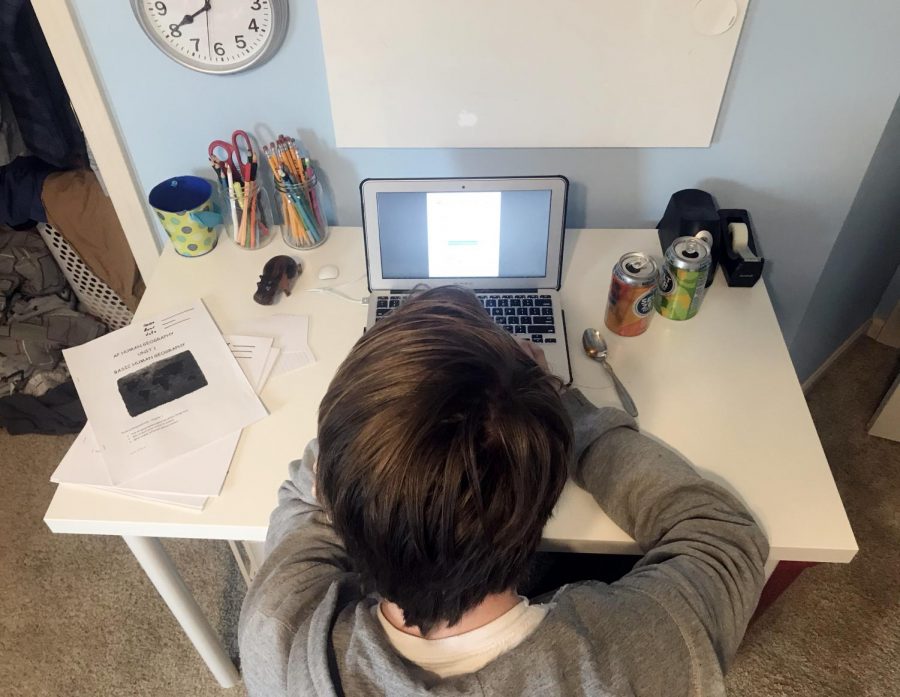 Freshman Finn Lotton-Barker learns at home as classes resume for the year. Even after students had the chance to return for in-person instruction, Lotton-Barker was among the more than 60 percent of LHS students who decided to stay home.

As the district moved forward with the hybrid plan, more students than expected chose to continue school completely remote than expected.

Reasons why students and families chose remote learning seem to be based around a feeling that it was the safest option. The district’s finalized hybrid schedule also affected student and family decisions as to whether returning to school was safe or not.

Junior Zoe Symons was originally planning on going back to in-person schooling but decided to stay remote because she felt the hybrid schedule was implemented too early.

“I decided to stay online because I just think that it’s too early in the pandemic to go back. I was originally leaning toward doing hybrid, but I decided to do online because the infection case numbers are still going up, and I will not have any classes with friends because of how the groups are split up,” Symons said.

Symons also felt that online school was working well for her and not causing her any educational difficulties.

Junior Sarah Derby was also unsure on whether to do in-person but ultimately chose to stay remote.

“I was on the fence for a long time and was not sure what I wanted to do. I was planning on going hybrid but when I learned that we would only go one day a week, I just did not think it was worth it,” Derby said. “I hope to see my classmates and teachers without a screen barrier one day, as long as it is safe to do so, but I do not think we are quite there yet.”

Derby also felt like she was getting more homework done during online school because of encouragement from teachers.

“I feel like I am getting more homework done during online school because the teachers are trying to keep their students engaged,” Derby said.

Junior Siana King, made the decision to stay online after viewing the finalized hybrid plan.

“I was originally planning to do hybrid but when I found out it would be only one day a week and with a very small group of people in my classes, I decided not to,” King said.

King saw the benefits of staying online and mentioned that the workload is easier to manage because she did not have that flexibility while in school.

Sophomore Inlia Brave, chose to stay online because she thought going in-person to school would put her parents and herself at risk.

“I chose to stay online because of my parents. They are both affected with autoimmune disease so it would be really hard for them to fight it if they got COVID,” Brave said. “I wanted to keep my family safe and see friends and I would not be able to do that if I got COVID at the school.”

Junior Adam Kasht chose to stay online due to his mom’s decision.

“I am staying online because my mom chose for me and said it would be better for me to do online school rather than hybrid, and I agree since I would only be back one day a week; I am comfortable with it,” Kasht said.

Kasht, along with many other students are hoping COVID is not a big concern in the upcoming months so they can return to school safely..

“I plan on returning next semester so I could see my friends and teachers at the school and actually meet the staff in person rather than just online,” Kasht said.