School board discusses revisions and delays on move to hybrid-learning 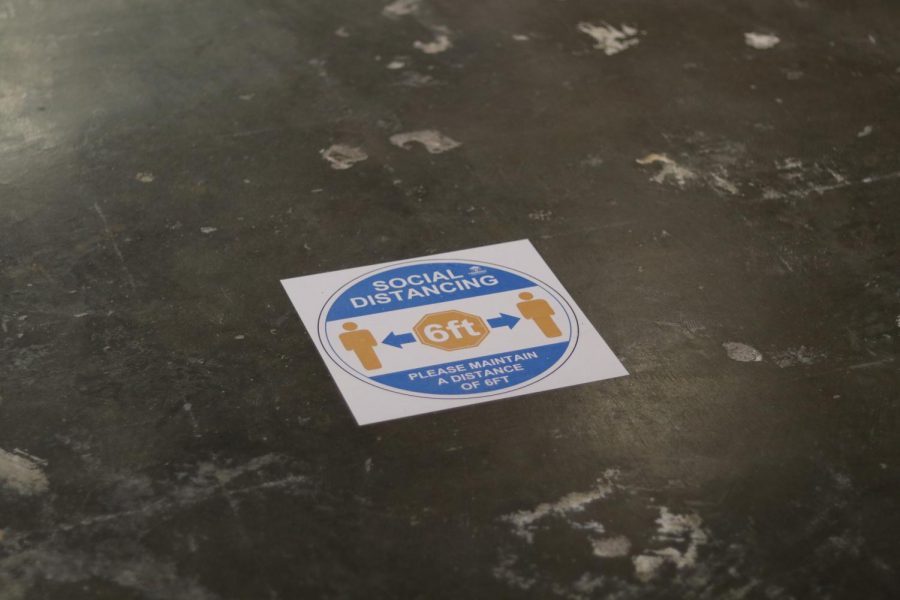 A sticker reminds people of the importance of social distancing. Students and faculty are expected to remain six feet apart and wear masks at all times when inside the building.

The start of hybrid learning for elementary schools was delayed to the end of their trimester in early November by the school board on a 4-3 vote Monday night. High schools and middle schools will still begin the transition to hybrid learning on Monday.

The school board met Monday to discuss USD 497’s preparations to move to hybrid — the first time many students will have returned to campus since the pandemic began in March.

The decision to move to hybrid learning was made in late September, and plans have required revisions before implementation. Among them, the schedule for high school students now has students participating in just one day of hybrid learning per week.

The board made the decision to delay the elementary rollout to give teachers time to make adjustments before moving to hybrid. With 1,024 elementary students choosing to stay remote — an increase of 734 students who started the year with plans to go hybrid — some elementary teachers would have completely different rosters in the middle of their trimester, and students would face class changes before the end of the grading period. Now, elementary teachers will continue to teach the same students until the end of the trimester before schedules are changed due to the hybrid model.

The move to hybrid learning continued to draw concerns even as advocates hoped it would address students who are being left behind.

Board member Shannon Kimball worried about staff members leaving the district over the decision to move to a hybrid model.

“I know that our teachers and administrators are under more stress than I’ve ever seen,” Kimball said. “In nine and a half years on the board, I have never received a letter of resignation from a teacher until this last two weeks. I have received seven. Either letters or messages telling me that they were getting ready to do this. We have a personnel report tonight where we have 21 staff members leaving either now or at the end of the year. I am really concerned about all of those things.”

Kimball, who voted against the decision to move to hybrid, said that it would damage the relationship between the board and Lawrence Education Association, the Lawrence teachers union.

“Before this pandemic we were already in a crisis of a teacher shortage,” Kimball said. “We have had a fragile relationship with our LEA over the years that I have been on the board. I have heard from a lot of teachers that they felt like those relationships have been really damaged, and that greatly concerns me. I saw some new survey data showing that over a quarter of teachers nationally are considering retiring or quitting the profession altogether at the end of the school year, and it’s because of the COVID-19 pandemic. I just keep asking myself, our school district afford to lose 25 percent of staff. Teachers, administrators and others. I don’t think we can. I know we can’t. I really want our board to have an honest conversation about that.”

Board member Erica Hill, who voted in favor of the move to hybrid, said that she empathized with what teachers were struggling through.

“My husband has been a K-12 teacher for over 20 years, and he is currently teaching in a neighboring urban district, and he goes to school every day,” Hill said. “So, even though I don’t know everything you’re going through, I acknowledge that it isn’t easy. I am not saying this to make it about me. I am definitely not saying that. But, I am saying this because I have some understanding about what you are going through based on the conversations I have with my husband.”

Yet, she said hybrid instruction would help students.

“So what are we going to do fro those students we keep talking about that need in-person instruction,” Hill said. “What are we doing for them? This conversation has rebuilt additional inequities that we know have existed.”

“I’m concerned about that in terms of honoring our commitment to our community to keep the cases down,” school board president Kelly Jones said. “When the state says we should not be in school, but the county says that we should.”

Prairie Park Elementary librarian Erin Schramm criticized the board for not putting safety first when making decisions about schooling in the pandemic.

“The district has repeatedly said that getting students in front of teachers is their number one priority. We as a group believe that priority — while well-intentioned and important — should not be number one,” she said. “Student and teacher health and safety should come before all else.”

As board members discussed delaying the start of a hybrid model for elementary schools, director of secondary schools Rick Henry acknowledged that there are no easy answers during a pandemic.