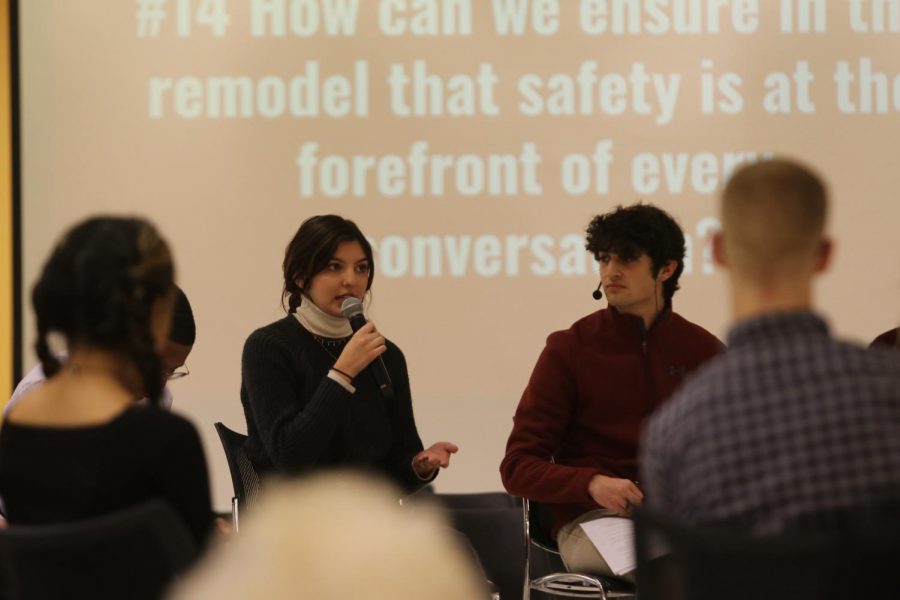 In the wake of a gun being confiscated from a student on the first day back from break, junior Oscar Schmidt said they noticed themselves more regularly planning escape routes when walking into a classroom.

Schmidt’s frustrations were echoed by peers during the Student Voices, Student Actions School Safety Forum in January, a community event hosted at Lawrence High. Twenty students, including moderators Trevor Arellano and Sami Turner, discussed 18 separate questions about safety in school, such as “How can we prevent weapons from entering the school while respecting personal privacy?” and “How do we increase transparency regarding safety issues?” These questions were drafted by the moderators and based on student input.

While parents, Superintendent Anthony Lewis and school board members were present, only the pre-selected students were permitted to talk.

“We want to set a precedent for the rest of the district and community that student voices are important,” Turner said.

The one point students seemed to agree most on was that, after four weapon incidents at LHS in the span of a single calendar year, it was easy to become numb.

“I think I speak for everyone here,” senior Amelia Vasquez said, “when I say safety is consistently on our minds.”

In the three incidents where a student brought a firearm to school, all claimed to carry their weapon in self-defense, the most recent occurrence relating to a dispute that escalated over winter break. Senior Jon Wertin suggested students be given more flexibility to continue school work from the safety of their homes when necessary.

“I didn’t hear about [the gun incident] until I got home and my mom told me,” Schmidt said. “That terrified me more after the fact than if I had learned in the school. That’s more scary to me than knowing in the moment would be.”

According to Lewis, SchoolMessenger is being prepared to be implemented as a mass-text system for safety emergencies. Student phone numbers stored in PowerSchool will be used.

As the discussion moved toward Lawrence High’s $46 million remodel, expected to finish in August of 2021, opinions began to differ.

Balancing student privacy, safety and comfort led students to question the need for metal detectors or tinted windows. Several rooms in the new remodel rely more on natural light, with the new glass corridor that connects the main building to the former annex opening to students this week.

Junior Trinity Shorter pointed out that only some doors open to student badges, which can become more than an inconvenience in an emergency.

“In a real emergency, and I’m not at one of those doors but I have my key card, how am I supposed to get in?” Shorter asked.

Schmidt said student involvement in the rest of the remodel is important.

“I don’t think students were very much involved in the planning process…” Schmidt said. “There is still so much we can be doing with the remodel.”

The 18 questions students answered were printed on paper handouts, offering those not a part of the forum to give their input by submitting it in writing after the event.

The very same day that students led the community forum on safety, Lawrence High and Free State students were asked to take a survey on Student Resource Officers. At the same time Lawrence High students were taking that survey, a student was arrested by an SRO for suspicion of battery on a police officer, according to a news release from the district.

When results of this survey were discussed during the Jan. 27 school board meeting, board member G.R. Gordon-Ross argued the importance of student-SRO relationship building.

“Most of the students could name the security guards and they couldn’t name the SROs because they didn’t have the relationships with them,” Gordon-Ross said.

Board members discussed what role the SROs should have going forward, especially as the city last year asked USD 497 to take on a larger role in funding the program.

“When I went to school here, it was a little bit different,” said Rials, a 25-year LHS alumni. “There were kids that had rifles in the window in the back of their trucks. Things have just changed.”