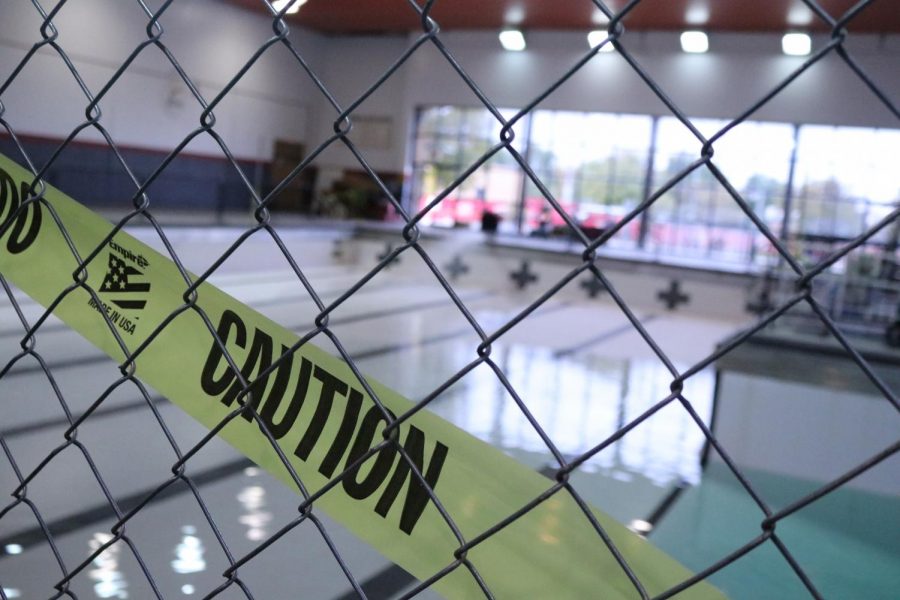 "Caution" tape covers the entrance of Carl Knox pool as it remains closed for storage.

Anyone who has swam at Carl Knox Natatorium knows exactly why students call it “the swamp.”

Past and current swim team members report that Lawrence High’s pool faces problems unlike any other they have swam at. Inadequate facilities and poor communication throw doubt that current construction plans will alleviate these issues.
Facility failures
Central to swimmers’ complaints are air quality and chemical imbalances in the water. According to swim coach Kent McDonald, especially high or low levels of chlorine and failures in the water pump system have frequently occurred. When the facility was under the management of the city, it was common to have chlorine levels very high at the start of the week and gradually dip to low levels by the end.

For 2019 graduate Morgan Jones, the imbalanced levels of chlorine would make her break out in hives a few times a week.

“It felt like my skin was on fire,” Jones said. “The only thing that would make it go away was Vaseline.”

Several other swimmers reported the pool drying out their skin to a significantly more extreme level than other facilities they have used, worsening acne or causing rashes.

McDonald recalled a particularly severe example where a swimmer’s new blue swimsuit was bleached white after about an hour of being in Carl Knox. Another student said swimmers avoid wearing their competition suits when they compete at Lawrence High to avoid damage.

Poor air quality in Carl Knox is exacerbated by lack of circulation, causing a buildup of fumes. According to McDonald, swim teams opened the windows in Carl Knox until the windows became permanently stuck closed.

Several swimmers reported getting nauseous because of the fumes combined with the hot air of the natatorium.

“During some practices, girls have to stop swimming because they can’t breathe or are coughing too bad during our reps,” senior Haven Bellerive said.

Some problems are the result of misuse, rather than failure of the facilities. Several classes throughout the day use the pool, which can result in a buildup of chloramines, the chemical product of chlorine mixing with natural body oils, sweat and personal care products. This can create a thin layer on top of the water and make the water cloudy and challenging to see through.

On more than one occasion, issues with pool quality forced practice to be held at Free State’s Indoor Aquatic Center. Although McDonald and several swimmers report conditions have improved in recent years, McDonald believes these issues with Carl Knox have played a factor in pushing some swimmers to quit the sport.
Work in progress
Earlier last year, Lawrence Parks and Recreation formally ended its 39-year relationship with Lawrence High that involved co-management of Carl Knox.

In the past, communication over management of the facilities has been sparse, according to McDonald. In one instance, several fans appeared to be installed in the ceiling of the natatorium suddenly one day. Although presumably intended to be a fix to the lack of circulation resulting from the windows being stuck shut, the fans blew air in the wrong direction, and half were never operable.

Another time, an electrician was sent to fix the swim team’s defective scoreboard, resulting in other parts of the scoreboard becoming defective.

Lawrence High’s ongoing $48 million construction project, however, may do little to address these problems. Design plans include a new HVAC system and expanded deck space, both of which are projected to be finished in phase 7, the final phase of the 2021 project.

“Nobody ever asked me what I needed,” McDonald said. “There’s about a hundred things I would have rather had before those [improvements].” 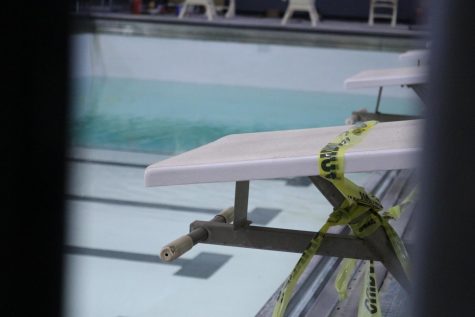 One thing McDonald was hoping to receive was new bleachers. About four years ago, black mold was found in the bleachers, resulting in their removal and replacement with smaller metal bleachers.

“I’m hoping these are just long-term temporary bleachers that they gave us,” McDonald said. “[They are] grade school bleachers, people sitting and their knees around their ears. It’s uncomfortable to watch.”

During phase two, however, new water filtration systems were installed, per the recommendations made by the city during the master-plan phase of design.

“My direction to our construction team when I stepped in was we need to have that pool ready for our winter sports,” said Tony Barron, executive director of facilities and operations for the district.

Although he did not personally oversee the design process, which was informed by committees of faculty and Lawrence High families, Barron expects the new pump to improve conditions in this upcoming boys swimming season.

“The former system was extremely old and had several maintenance issues,” Barron said. “The intent obviously would be to eliminate those problems with pumps and everything which has been replaced. Time will tell moving forward, but our intention is to eliminate all the issues…”

With the loss of several important players in the construction process, such as chief operations officer Kyle Hayden, assistant principal Mike Norris and principal Matt Brungardt — all of whom have moved on to other school districts — several new administrators have just now joined the construction process. Speaking generally about ongoing construction, interim principal Cynthia Johnson expressed the importance of communication now that her and Barron have a more hands-on role in the process.

“[During phase one] we were just coming in, and now [Barron and I] have made that commitment to learn this project,” Johnson said. “We are doing stuff completely different in regards to how we communicate with staff members.”