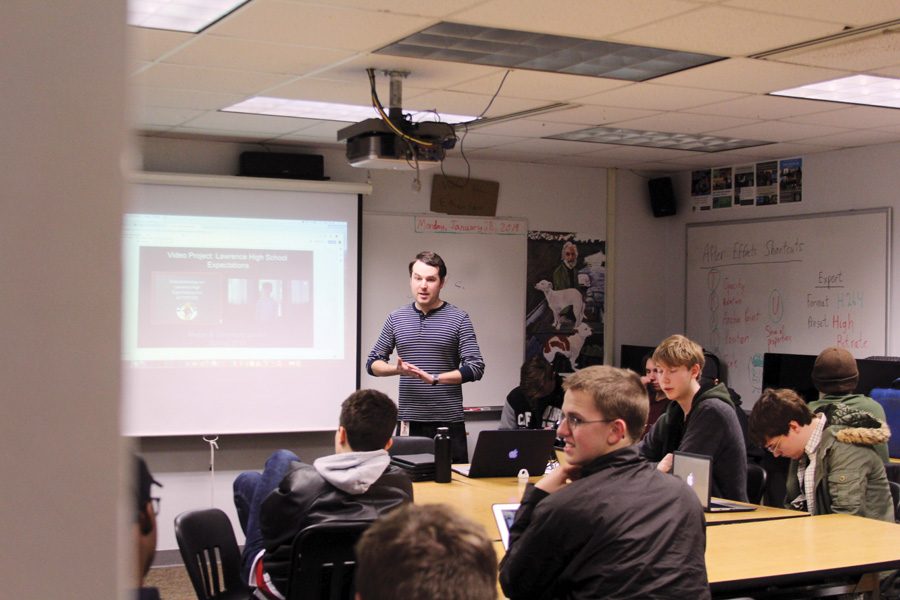 Zach Saltz gives a lesson to his film class. His class will move close to the photography and journalism rooms to maximize equipment inventory. “I’m really excited to be near other CTE teachers,” Saltz said. “If we could combine and share resources, how awesome would that be?”

The arts and career and technical education programs have long proved to be deeply tied to what makes Lawrence High the place it is.

Despite national awards in a variety of categories and the potential to equip students with the skills necessary to survive in a progressively more technological future, the classes have mostly been isolated in the far reaches of the school building. Principal Matt Brungardt said that remedying that problem and showcasing these classes was a primary goal of the firm attached to Lawrence High’s construction, Gould Evans.

Most of the classes will move to the hallway off the main gym, which will become the “innovations corridor.”

“[One of our goals was] bringing the art and CTE programs into the heart of the school and increasing their visibility,” Brungardt said. “One of the goals of the steering committee and design team was to make these 21st Century programs more visible and to put the student work on display.”

The firm is aiming to establish a more equitable division of this department. Currently, Lawrence High contains a wide variety of class sizes and working spaces, tailored differently to fit the needs of each department.

Brungardt added that while many classes are up to standards, as a whole, Lawrence High lacks classrooms that are equitable to peer schools.

The peer schools Gould Evans studied mostly had 720-square-foot academic classrooms. Less than 30 percent of the classrooms at LHS are 720 square feet.

Meeting these specifications comes with many benefits, but also some noticeable disadvantages. A key one of these lies in the woodshop, as noted by longtime teacher, Jay Hundley. Due to what he views as insufficient plans for the woodshop, Hundley has announced his retirement.

“I would have liked to have taught for another year, but the shop is my soul, so that is why I am retiring at this time,” Hundley said.

He noted the loss of office and storage space in the plans.

“I would get a finish room, not any bigger, the same size,” Hundley said. “The finish room is the only thing that is undersized for this facility. Everything else is really nicely sized. We can have 20 students in here and do everything safely and still have plenty of materials and storage for everything.”

Despite downsides, there are positives to be drawn from the redesign.

This along with many other upgrades have film teacher Zach Saltz optimistic about the future.

“One of the benefits for me personally, is I will no longer be isolated from the rest of the CTE world,” Saltz said. “I don’t like having to walk down to see [photo teacher Angelia] Perkins and [journalism adviser Barbara] Tholen the whole time. I am going to be right next to Tholen, we are going to have a shared space in our classroom. They are also going to build a green screen shooting room across the hall that can be used by both video and journalism, which is awesome.”