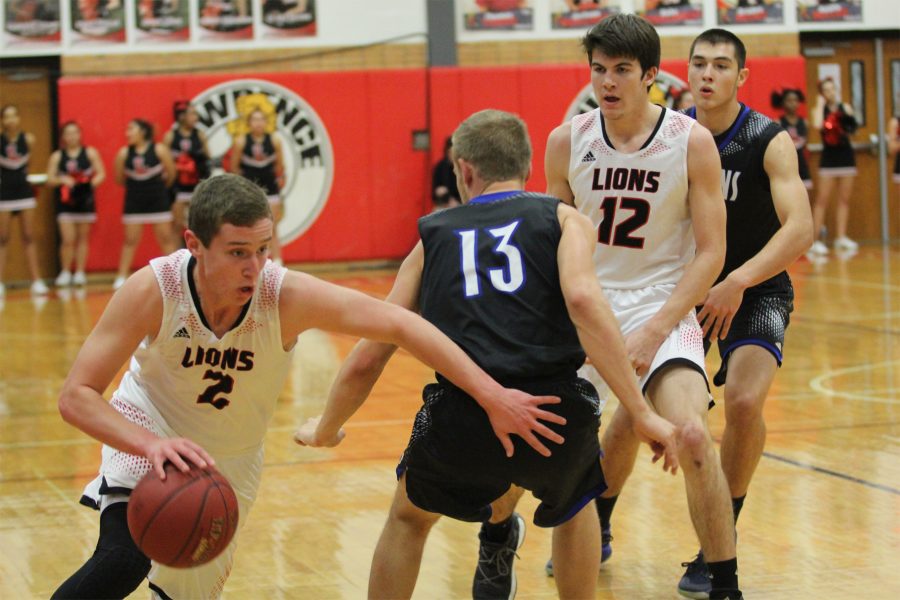 By Gary Schmidt and Cooper Avery

After a teary-eyed senior night ceremony, the Lions turned their attention toward the pressing matter: sending their seniors out on one more win. It took a performance of the highest degree, but the Lions escaped victorious, 62-56 in overtime.

The team came out strong, featuring a lineup of all the team’s seniors. The Lions jumped out to an early start, with assists from seniors Braden Solko and Austin Miller as well as sophomore Brett Chapple. However, after the quick start, the team struggled to find offense, stifled by the Olathe Northwest’s 2-3 zone.

The Ravens zone made it difficult for the Lions to find the ball inside, and the length of their backcourt forced the Lions into many turnovers and contested jump shots. As the Ravens began to get out in transition, they often were able to draw fouls and scored the majority of their points from the line, where they were remarkably efficient. All of this combined to send the Lions into the second quarter trailing.

The second quarter saw the Raven’s lead climb to as high as eight, but the Lions, led by their second shift comprised of sophomores Noah Butler, Trey Quartlebaum and Clarence King, and junior Anthony Selden, provided a good change of pace for the team, as the more explosive unit was able to run the court better with the Ravens. This allowed the team to keep the game within reach and send the Lions off on a high note when Chapple put back a missed King three-pointer as the buzzer sounded, trimming the Lions’ deficit to 18-22 heading into halftime.

The third quarter was much of the same for both teams, playing stern defense, yet exciting the crowd with some flashy play, such as senior Jackson Mallory’s cross court bounce pass to Chapple for a nice finish, or Butler’s rim wrecking dunk late in the quarter. Despite the back and forth play, the Ravens built a small, yet manageable lead, heading into the fourth ahead 28-32.

The Lions clawed back to tie the game after Miller drilled a pull-up three pointer, but the sharp-shooting Ravens continued their hot night from downtown, swishing their next two treys. Trailing yet again, the Lions turned to King, who got to the line well to keep the Lion’s in the contest. His aggressive play earned him several free throws, but even his aggressive play was not enough to pull the Lions even.

The Lions found themselves down 48-42 with less than 30 seconds in the contest and called a timeout in the tense moment. Head coach Mike Lewis kept the message short and sweet for the Lions: Put yourself in a position to win.

Miller, refusing to let his team lose on senior night needed no other signal.

King brought the ball upcourt and swung into Miller who lined up in the left wing and sweetly stroked a three, making it a one possession game. The Lions instantly shifted into a full court press, and forced the Ravens into a five second call, turning the ball back over to the Lions without taking anytime off the clock. At that point, everyone in the gym, even the Ravens, knew where the ball was going.

The ball was inbounded to Miller, who instantly had a defender draped all over him. Squaring up, Miller tossed up the shot of his career from well beyond the arc and to the dismay of the Ravens, hit nothing but net. In the matter of 10 seconds — and two shots from the senior standout — the Lions had escaped from a certain loss and turned the game on its head. Taking the shots for Miller took no questions.

“[I just had to shoot them.] I know they are gonna go down, I have that mentality. If I’m gonna shoot it, its gonna go in,” Miller said.

The noise of the gym was deafening, the student section chanting, “Austin Miller!” The Ravens threw the ball inbounds and raced down the court, turning the ball over, and nearly giving the Lions a chance to win the game. The Lion’s last second heave fell short, and the two teams headed to overtime.

The Ravens struck first in overtime, with yet another three, but the rest of the frame was all Lions. Senior Kobe Buffalomeat, who was named the Winter Court King at halftime, instantly responded for the Lions inside, and on the next possession, it was the man of the night, Miller, hitting his final three. He finished with 12 points on his fourth three-pointers and put the Lions ahead for good. The Ravens chased for the rest of the game, and King found himself at the line again and again, finishing 11-14 at the free throw line.

The Lions came out on top 62-56, and the seniors were able to claim a special victory on their special night.

The Lions return to action on Feb. 14, away to Shawnee Mission North, the 2016 state champions.