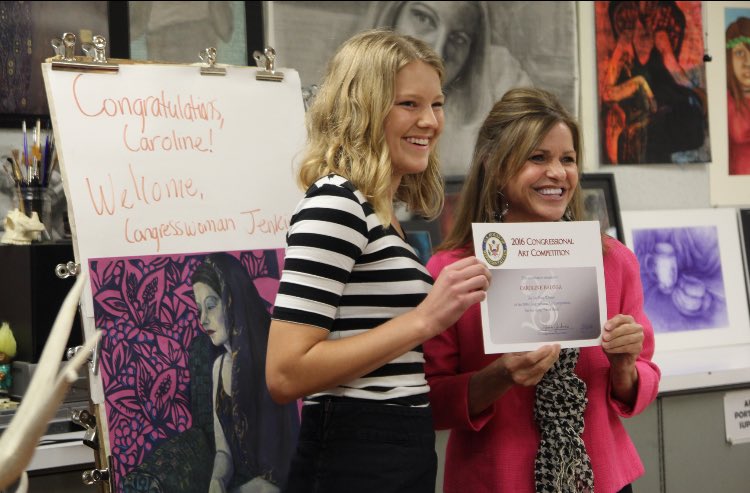 Senior Caroline Baloga was presented the Congressional Art Award by Lynn Jenkins on May 5.

Baloga won the contest with her pastel piece, “Vivid Hues.”

This is the third year in a row that LHS students have won the Congressional Art Award.

Kansas has four congressional districts. Since Jenkins’ district includes part of Lawrence, she was the representative who chose Baloga. She said she likes the contest because it helps celebrate the arts, which are often overshadowed by sports.

“I think it’s such a high priority to encourage talents like the arts,” Jenkins said. “We tend to focus so much on sports, less on the arts, almost less on academics. So we’re always thrilled that Congress hosts an art competition to shine a little light there.”

Baloga’s piece will be displayed for one year in the Capitol Building in Washington, D.C.

“The winner from each district has their piece shown in the Capitol in D.C and gets flight tickets to go and attend the reception or opening of the exhibit,” Baloga said.

Art teacher Wendy Vertacnik hosted the small award ceremony in her classroom. She has had Baloga as a student for four years.

“[When Baloga won I was] very excited because she puts a lot of extra time into her work, spends hours and hours outside of school on her artwork,” Vertacnik said. “She’s really dedicated and that’s really helped her.”

Baloga will study at the University of Michigan at Ann Arbor next year.