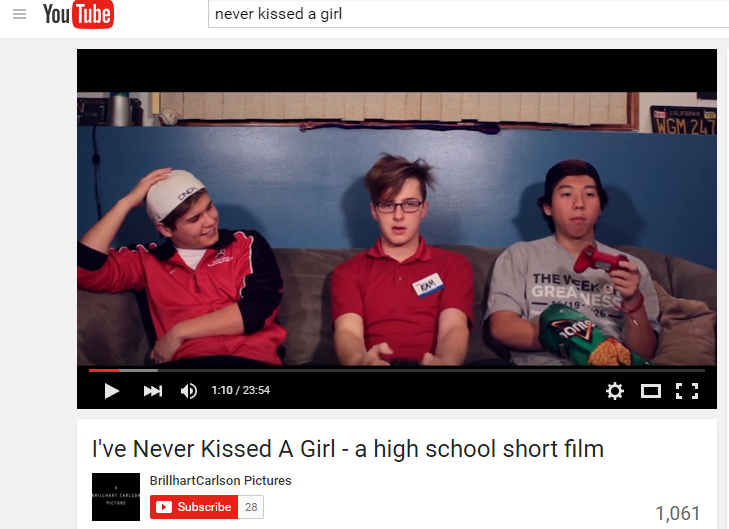 Juniors Trey Brillhart and Nico Carlson have their own YouTube channel, featuring their most

Posters have been put up around the school advertising a new, student-made film about high school students.

“The film took a long time to complete, but Trey [Brillhart]’s films have been getting a lot better and I think this is definitely been one of his best ones,” Griffin said.

The film is about 16-year-old Adam Briggs [Lynch] never having experience with relationships, and when his middle school crush Emily Mayer [Griffin] moves back into town, he makes a move. With twists and turns, the film is admired by students and teachers.

“The idea of all these romantic movies that usually have a big gesture to give the girl,” Brillhart said. “I thought it would be funny to have the whole movie be about the guy trying not to get killed so he could be with the girl.”

Last year, Brillhart and Carlson directed the student film, “Impact.” Most of the students who participated in “Never Kissed A Girl” were actors in “Impact.”

“Trey and I mainly made the film because we’ve been doing film for about a year now, since sophomore year, we wanted to have a different kind of film,” Carlson said. “We wanted a different dialogue and bigger plot and this one has a little twist to it. We just wanted to challenge ourselves and make this one the best one we could.”

Their next film will come out this summer on their YouTube channel, BrillhartCarlson Pictures.

“I was trying to go off of modern comedy movies in general, they always have that big romantic gesture at the end,” Brillhart said.