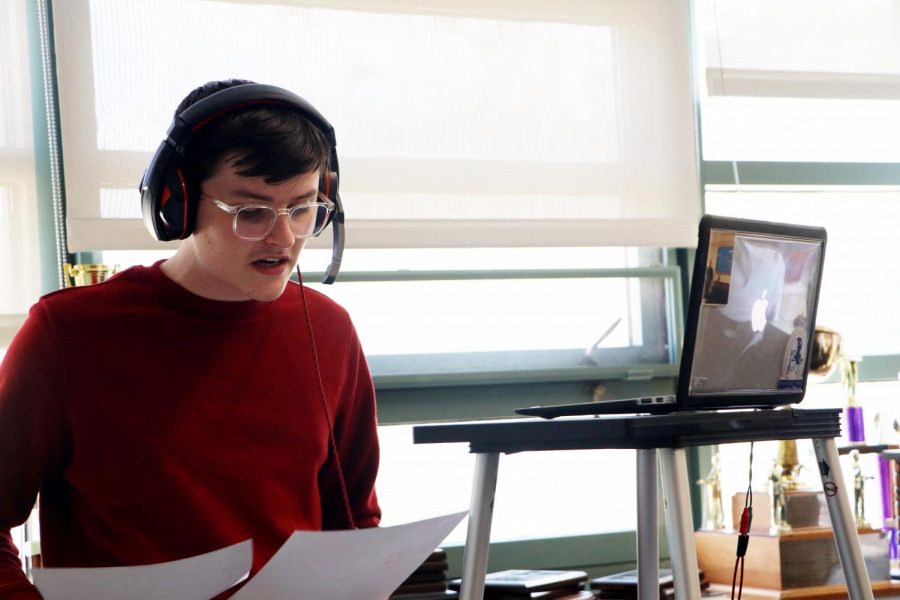 In the zone, junior Jake Shew participates in the first debate of the year on Oct. 16. Debate has looked a little different with regards to the new safety precautions and sanitizing, "We've been debating online, so instead of being in the room with the opponents and judge it's a video call and we've been debating in headsets."

As the debate season continues with unique challenges, debaters have adjusted well to social distance protocols.

Navigating through internet connectivity problems and communication issues has not been ideal, especially when trying to prepare for and win a match.

Debaters take part in online tournaments using the platform NSDA Campus which essentially creates a video call for each round. Lawrence High students use rooms in Lawrence High, where debaters sit more than six feet apart from their partners.

Perrin Goulter, a sophomore and returning debater, said that the transition to online debate has gone mostly well.

“The debate season this year is super different just because of the changes to in-person activities,” Goulter said. “ But despite not being able to do big tournaments, this isn’t actually causing that much trouble. And while this obviously isn’t the best scenario for the season, it is a really good alternative nonetheless.”

Joel Rose, a senior, said the new online debate format allows the team to attend different tournaments than they would in a typical season.

“We are also going to much more competitive tournaments that are out of state because we don’t actually have to drive to them, so we can go to national circuit tournaments,” said Rose.

“Most of the challenges that I have faced this year are technical ones, all because of debating through a computer,” Zimney said. “At the first tournament we went to LHS, but the school WiFi wouldn’t allow our computers to stay in the meeting room for more than 30 seconds at a time… Some other school districts have also had connectivity issues, which can make rounds hard because you can’t even hear what your opponents are saying at times.”

This year, the size of tournaments and debate teams have decreased dramatically, with some blaming the online format. Many previous debate members have not returned this year because it is online and freshmen who might have joined may have been discouraged by the virtual format.

As Lawrence High transitions into hybrid learning, Zimney thinks this learning style could help some members of the team.

“I think hybrid learning is going to help the novice debaters this year the most,” Zimney said. “It will force some of the students who don’t normally focus in online classes to be present, but more importantly it’s going to allow students to have practice rounds with their partners.”

Debate isn’t only about tournaments. A main focus of the activity is the team aspect that many debaters won’t get to experience this year. Late work nights, prepping for rounds together, meeting students from other schools, and bumpy bus rides have been sacrificed for the safety of everyone.

Junior Helen Viloria  says she misses these moments the most.

“I miss being able to travel on the buses and getting to talk to everyone, the community/social aspect is definitely my favorite part of the activity, and it’s sad that we aren’t afforded it this year,” Viloria said.

This debate season format is not ideal, but this year has functioned as a test run. Online tournaments can now be utilized in coming years and run smoother, since team members are now used to it.

Goulter said this year could end up benefiting and changing the way debate functions, even after in-person debate returns.

“In the long term I do view this year as a really good thing for debate,” Goulter said. “Having these systems in place will open up many other routes to connect with the debate space. Having this setup could help people who may not be able to make it to tournaments participate in the events. This will make the activity so much more accessible and will hopefully open up more opportunities for everyone.”