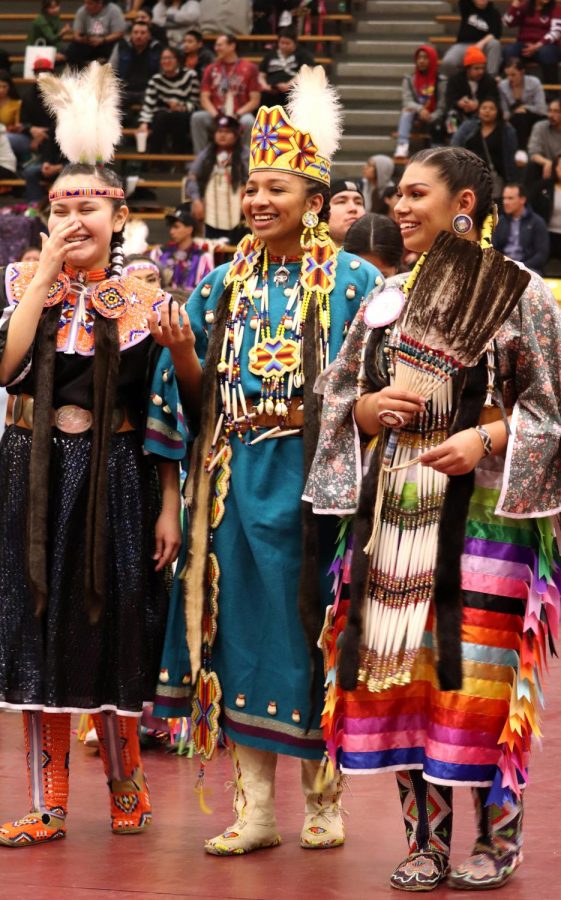 Dancing in powwows never fails to be a powerful experience for sophomore Shelby Bointy and junior Amaya Harris. “When that drum stops, and you stop you kind of take it in for a second like, ‘Yeah, I just did that. Yeah, I can feel it,’ ” Harris said. “It just feels really good. There’s never been a time when I finish dancing and it didn’t feel good afterward. It always feels nice to dance.”

Harris and Bointy traveled with two other USD 497 students to Dewey, Okla., to compete in the Battle of the Plains Powwow on Jan. 18 and 19. They were both first-timers at the event. Harris placed first in her category and Bointy placed third.

“We all traveled together in this little minivan. It was very cramped,” Bointy said. “I had to worry about my feathers the entire time because my suitcase isn’t big enough to fit them.”

Bointy and Harris are related and have both been dancing since they were children. Bointy remembered that she used to run into the arenas at powwows when she had just learned to walk.

“A lot of people usually say that they have been dancing since they could walk,” said Harris, who now dances jingle and southern traditional styles. “But I honestly have been.”

The size of the powwow surprised Bointy and Harris, but they both became more comfortable and excited to dance during its grand entry.

“Grand entry is a very formal type of entrance in which dancers of all different styles line up,” Bointy said. “Some people choose to dance and some others just choose to walk.”

It took Bointy some work to find a style of dance that felt the most comfortable. She now dances in the men’s fancy category.

“When I first watched her dance that at the Haskell powwow, it made me tear up because it made me realize that this is what she wants to do,” Harris said. “I could tell on her face that that’s what she wanted to do, so that was nice to watch.”

Especially because she is one of the few females to dance in the men’s war dance category, Bointy hopes that her dancing inspires others.

“Hearing stories of those women war dancers convinced me to want to get into war dancing because I’ve always wanted to my entire life,” she said. “Now I dance that style full time, and I’m hoping that maybe I can inspire other young women to want to war dance.”

Harris has grown to appreciate her dancing more as she gets older.

“I know most kids think it’s for the money or it’s just to look good,” she said. “The older you get, you start to realize that you should just do it for the tradition and the people that you love and for the people who can’t.”

When Harris dances, she thinks of the people she has lost who can’t dance anymore, and she feels them watching her in the arena.

“It always feels good because after I dance I always take it in,” Harris said. “I could feel the energy being given to me by everyone watching and all my loved ones”

Members of Lawrence High’s Intertribal Club, including Bointy and Amaya, had hoped to go to the Gathering of Nations Powwow in Albuquerque, N.M., in April before it was canceled because of the coronavirus pandemic. It is the largest powwow in North America.

“It kicks off the powwow season for the summer,” Leona Antoine, the club’s sponsor, said. “It’s one of those powwows that has a reputation to where if you place there, you’re pretty much guaranteed to place throughout the summer at different powwows.”

Members of the club also planned on visiting colleges in the area on the trip, including the South Indian Polytechnic Institute and the University of New Mexico. They hoped to see the American Indian Art Institute.

To raise funds for the trip, Intertribal Club members sold shirts, and had planned to host a powwow at LHS this spring as a fundraiser, before the pandemic interrupted life. Bointy and Harris had looked forward to representing LHS in New Mexico.

“There’s a lot of pride,” Antoine said. “It’s really cool to see because the style that Amaya dances, jingle dress style, is the same style that I danced, and so she’s just so smooth, and she just has a really nice style.”

Bointy feels pride about her dancing, too.

“I am Native American and I’m proud of who I am,” she said. “I like to carry on the tradition of dancing and I hope that my dancing will inspire other young Natives to learn to dance as well.”