How the Lions will establish trust through community, and how they plan to grow it amidst postseason aspirations 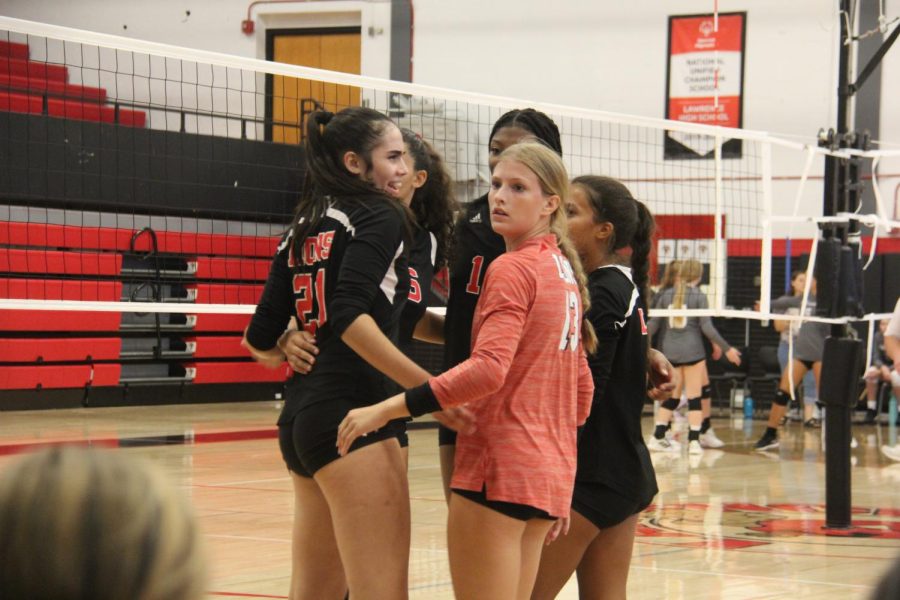 The volleyball team briefly amid a match against Blue Valley Northwest, played on August 30, in which the Lions fell 3-0.

In the eyes of Scarborough, who is in her 15th year coaching the team, it’s been far too long since the Lions have hoisted a championship trophy. But how can the Lions achieve their dream after saying goodbye to the last class of players who witnessed the glory of that 2018 championship?

This past offseason saw seven seniors graduate and move on. It impacted the team, but Scarborough is confident they made their mark before they left.

“Losing them is losing leadership,” she said. “But these new seniors have really shown that they learned from that leadership and are trying to carry on that tradition.”

At the forefront of those rising seniors is co-captain Dana Nichols. As one of four returning varsity members, Nichols knows the ropes and even echoed the positive mindset of coach Scarborough.

“I’ve really been focussed on telling the team to always give it their all,” said Nichols, who works with co-captain Brecken Ostronic as liaisons between the community and team. “No matter what happens in any game or practice, give it your all, go for every ball, don’t let any balls fall, keep a good attitude the whole season, just really pushing them.”

While Nichols is pushing the team, it’s those common attitudes and goals of the squad that will take the Lions that extra mile toward that state championship. So far, the team has been focussing on one big one.

“Building trust,” Nichols said of what was most important for the team. “Learning to trust each other on and off the court to build that team chemistry. We really need to use each other for support to the best of our ability.”

Despite the team’s drive to make it to the state championship, the Lions fell in their first two matches. However, players like junior Seenane Brewer plan to use the losses to gain momentum and improve.

“We played a really gritty game,” Brewer said of the season opener against Blue Valley Northwest, a top-10 team in the state. “I feel like we weren’t letting balls go. Even if it didn’t work out, we went for every ball and gave that effort.”

Trust, community and best effort, Scarborough says, will allow the team to steamroll into the postseason and achieve success.

“Community is an attitude we always try to instill,” Scarborough said. “It’s never about the individual player; it’s about how we operate as a team, as a program. It comes down to that sense of community and what it means to be a Chesty Lion. I think they have to commit to the goal of the team as a whole. And potentially put some individual goals aside for now, so that they can achieve that common goal of making it to state.”

That’s Scarborough’s goal: through team building, faith in each other, and their best effort in each match, set and point, they will make it to state and beyond.

“At the first practice of the season, Scarborough made us look at the state championship banners and talked about how we hadn’t had one of those in way too long,” Nichols said. “Scarborough has made it very clear that we need to get back to state.”

Jack Ritter contributed to this report.