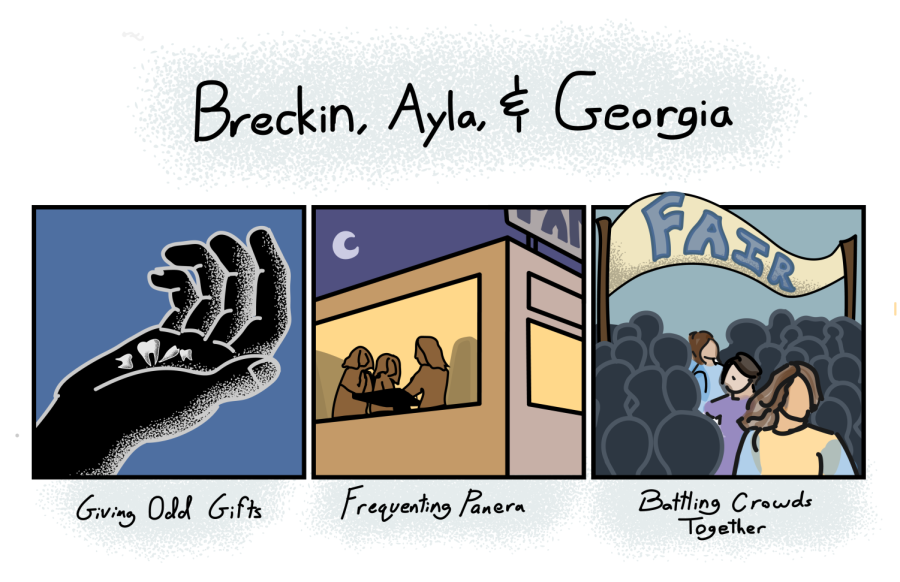 Sophomore Evan Maletsky and junior Luke Havener didn’t like each other when they first met in third and fourth grade, respectively. In fact, Maletsky said that he hated Havener after their moms’ and sisters’ friendships brought them together.

“Evan was not a fan,” Havener said, of Maletsky’s impression of himself. “I was just kind of skeptical at first and Evan was just super annoyed by me.”

However, something shifted soon after they first met, thanks to a LEGO loft and their families’ close friendship.

“He used to have a really cool loft, and there were some really, super cool LEGOs up there,” Maletsky said. “I was like ‘man, this kid’s lame,’ and then I went up to the loft with the LEGOs and I was like, ‘nevermind.’”

Over the years, Havener and Maletsky’s friendship has grown with them, as they went to private school together, embarked on road trips, and helped each other through romantic relationships and breakups.

“Especially through our brains developing or whatever,” Maletsky said, “we’ve kind of molded each other, around each other. And if Luke was to die tomorrow and I was to meet somebody else… we wouldn’t be able to form that close development with somebody else.”

Maletsky and Havener aren’t the only Lawrence High students that have maintained a close bond over the years.
Clinton Washington and Dagon Sumner

Shared interests and values as well as unique commonalities have helped to keep individuals friends for long periods of time.

Juniors Clinton Washington and Dagon Sumner became friends after meeting on the first day of fifth grade after Sumner had just moved to Lawrence.

Sumner attributed his becoming friends with Washington to “the fact that we both had younger siblings that are in the same grade together. It was like, ‘ohh, here’s someone who knows what it’s like to have someone nagging at you.’”

This commonality has transferred to other areas of their friendship, such as depending on each other for advice.

Sumner said he values “the fact I can depend on [Washington] whenever, in most scenarios. Say, brother advice.”

The pair said they rarely have arguments, but if they do, they like to race to settle it.

“If we want to blow off anger at each other, we will do a racing contest,” Washington said. “Sometimes I win but the vast majority of the wins is [Sumner].”

Racing is made easier by their shared walking route home from school. Washington said he and Sumner have had the same walk home for years, giving them time to connect.

“During middle school and elementary we’ve always had that same path walking home,” Washington said. “So we’re like, ‘how’s your day?’”

Sumner discussed how losing other friends over the years has helped him appreciate his friendship with Washington.

“Whenever I start to have friends that fade away that didn’t feel like friends, it made me turn and actually value what it means to have a friend: someone that’s dependable,” Sumner said.
Giulia Ventello and Ruby Hull

For two friends, returning to Lawrence on the same day sparked a day of celebration and a long-lasting friendship.

Freshmen Giulia Ventello and Ruby Hull both moved back to Lawrence after time away for several years. The two met at a mutual friend’s house after both coming back to Lawrence for third grade.

“I think it was a very exciting day when we first came back originally…so that was just a big day of celebration kind of,” Ventello said. “I think that that kind of bonded us.”

Ventello added that time away from Lawrence and their peers during the same period helped cement this bond.

“We both entered 3rd grade with time apart from those kids together, which was cool,” Ventello said.

Hull and Ventello connected the strength of their friendship to the fact that they live only houses apart, as well as to their shared interests and activities, such as piano and voice lessons and participating in theater productions together.

“Doing theater and choir and devoting so much of our time to activities where you have to be vulnerable by putting yourself out there…we’ve been terrified about doing that together and we’ve felt terrible about how we’ve done together and we’ve also felt good,” Ventello said. “We’ve been through the good and the bad.”

Spending a lot of time together has led to having similar senses of humor, they said.

“I guess our humor is unique to our friendship because of how long we’ve known each other,” Hull said. “And our common interests and everything like that make our humor very similar.”

The pair didn’t share so much in common before they met, however. Ventello said they have influenced each other, and credited Hull for beginning her involvement in and love for theater.

“She definitely pulled me into the arts world because I wouldn’t have started theater I don’t think if it weren’t for her, which has become really important to me. So that is probably owed to her,” Ventello said.

Ventello discussed the ways Hull’s kindness has helped her to grow and realize things about herself.

“[Hull has] always been known for being so kind and [she] could not be mean to someone,” Ventello said. “And I feel like from 3rd grade when we met I always felt like I had to work harder to meet that because I’ve always been I think a bit more of an aggressive person… I think that she has made me a more creative, artsy and nicer person.”

Being opposites in some ways, Hull added that Ventello has also helped her personal growth in different ways.

“In 3rd grade when I moved here, Giulia was definitely more outgoing and tough I guess than I was,” Hull said. “I was very sensitive…I remember probably in 5th grade I hurt myself and then I didn’t cry or something and [Ventello] was like ‘wow, you didn’t cry. In 3rd grade you would’ve cried.’ I think I have taken that from Giulia; I’ve become more tough I guess.”

Ventello emphasized how close she and Hull are, touching on the idea of comfortable silence while spending time together.

“Just in general, I always feel comfortable talking to her,” Ventello said. “I’m not really comfortable sitting in silence with anyone but her, but I appreciate that we’ve gotten to the point where we can be together but not have to be together. She’s probably my only friend that I would want to have a lot of one on one time with and be comfortable with it.”
Ayla Guyer, Georgia Blackwood and Breckin Younger

“With them, we’re all able to just sit in a room and do our own things and not especially talk to each other,” Younger said, “but still feel comfortable just kind of existing near each other.”

The trio became friends in seventh grade, remaining close since.

“Although we’ve had other friends, it’s just always been both of them that I’ve cared the most about,” Younger said. “We don’t need to worry about what the other thinks because we already know each other so deeply and we already know that we’re loved and that we’re safe with each other.

Younger, Guyer, and Blackwood share bonds and connect in part through their unique gifts, such as locks of hair and wisdom teeth.

“We have a lot of unconventional gifts,” Blackwood said. “And we’re very open with each other about things. Breckin had her wisdom teeth removed so then we got a piece of her teeth. I got mine removed and I’m still looking for them so I can give them as trinkets.”

Guyer discussed the value the things she has collected from her friends hold.

“It’s just sentimental stuff,” Guyer said. “It just means a lot. It’s really small but it really does hold a lot of memories…I just have this whole shrine of things I’ve collected from them.”

Blackwood and Guyer noted ways they have helped each other try new things.

“We paint each other’s nails,” Blackwood said. “I don’t think she would paint her nails on her own.”

“I don’t actually own any nail polish but she makes me explore stuff,” Guyer said. “She makes me expand my horizons and get out of my shell.”

Guyer, Younger and Blackwood share many similarities, which has helped them understand each other better, Younger said.

While the group shares memories together, including many trips to Panera, attending the renaissance festival and mall outings, they also connect online.

“We mostly text but we do try to see each other outside of class too,” Blackwood said.
Weathering the Years, Together
Havener and Maletsky’s online communication was at one point marred by the fact that Havener didn’t have a cell phone and would text Maletsky from his computer.

“So I didn’t have a phone, Evan did, Evan would text me,” Havener said. “I would have my computer, I’d open it up later…that totally threw dents in our friendship.”

Maletsky reflected on the time fondly.

“I think that was just funny,” Maletsky said. “I’d just go up to his house and knock on the door and be like ‘bro, open your computer.’”

Like Ventello and Hull, Maletsky and Havener also live within a short walking distance of each other.
In June of 2019, Havener and Maletsky embarked on a cross-town scavenger hunt by bike.

“We went on a scavenger hunt where my mom was like ‘oh you need to go to all these places,’” Havener said. “We biked, literally, the entirety of the entire Lawrence.”

The trip across town became more interesting after Maletsky ruined his front tire in a run in with a car.

“There’s this car pulling out, I don’t see it, right. I truck the car, full on,” Maletsky said. “I absolutely demolish my front tire of my bike. We pull off at the [hardware store], try to fix it. I’m like, ‘OK, it’s probably fixed.’ We’re biking, it’s just flat, it’s completely flat. We biked all the way from that Dillons, to the Buffalo, past Freddy’s, all the way and back, on a flat tire. In the summer.”

Similar to Ventello and Hull, Maletsky and Havener discussed how their differences help them connect and learn from each other.

“We’re like polar opposite people as well,” Havener said. “Evan’s super into engineering stuff and I’m into a bunch of creative stuff and Evans’s all introverted and I am not. Opposites attract, whatever, so I guess that applies to us as well.”

Havener said these differences have helped him learn more about others and understand other perspectives.

“Knowing Evan and knowing how an introverted person acts and how a person who doesn’t want to hangout with people all the time acts… definitely gives you knowledge and perspective on other people in the world,” Havener said. “You’ve got to respect that instead of being annoyed by it.”

Dating back years and years, Havener noted the intertwined nature of their lives and the history they share.

“That deep connection to someone, where in all circumstances, just know that you’re going to have someone there for you is so important,” Havener said. “Knowing someone for that long, I don’t know if you can really replace that.”