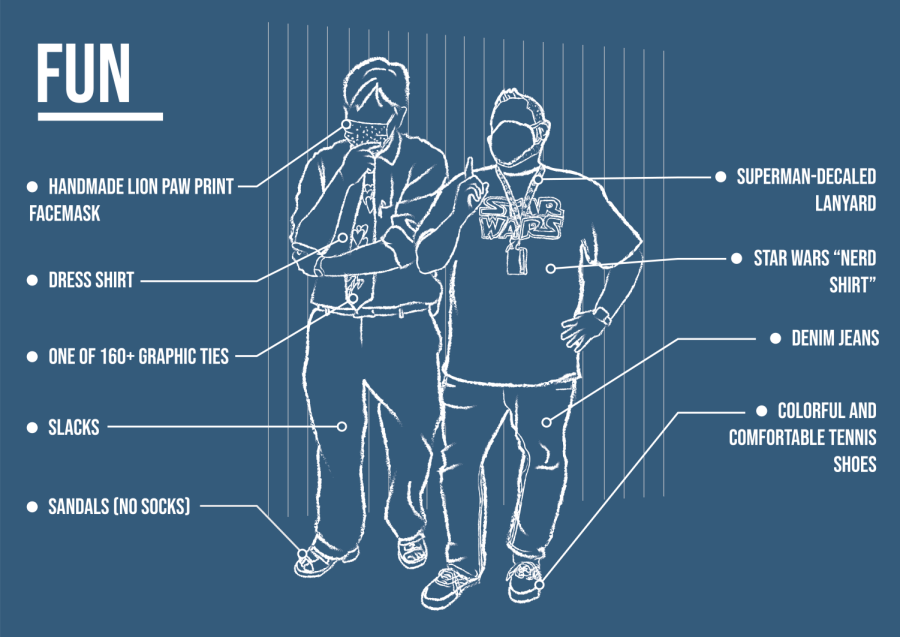 Teacher dress code freedom allows them to show off their individuality and personal style.

Getting ready for a day of teaching, math teacher Matt Ellis doesn’t have many choices to make when picking an outfit. Ellis’ signature look is a dress shirt, slacks, and sandals, along with one of his over 160 funky neck ties, picking a different one each day of the school year.

Some of Ellis’ tie patterns include sriracha bottles with hearts, Winnie the Pooh, penguins and depictions of Beatles songs such as “Yellow Submarine” and “Do You Want to Know a Secret.” Many ties are gifts, some from students, Ellis said.

“Different ties grab people’s attention and so that always is kind of an icebreaker for students,” Ellis said. “It’s just kind of a fun little side note in our relationship, so to speak.”

In 2018, several students created a Twitter page called “Ellis Daily Quote and Tie” with photos of Ellis in his quirky ties. The page has been picked up by various students, and is still running today.

“It’s something that we are all interested in when we come into class each day,” Green said. “It’s always something new and it’s a conversation starter that kind of gets us ready for class…it kind of gives the class a little more personality as well as [Matt] Ellis himself.”

While Ellis retains a degree of traditional professionalism with a shirt and tie, other Lawrence High teachers choose to stray away from typical professional dress. Because the USD 497 district follows a more relaxed approach when it comes to dress code for staff and teachers, individuals are able to express personal style and dress in what makes them feel most like themselves.

“By dressing in something that makes me comfortable, then I feel more free to be able to do what I need to do,” Lawrence High math teacher David Provost said. “When I’m more comfortable, I feel like I can teach better.”

Provost enjoys teaching in “nerd shirts,” jeans and tennis shoes. On any given day, one can observe Provost in a different superhero, Star Wars, etc. t-shirt.

“It has my personality come out, so I don’t feel it puts me as somebody who is uptight,” Provost said. “I do it because I feel like it’s an extension of me. I’m not trying to pretend to be something else.”

USD 497 last re-evaluated dress guidelines for teachers and staff in 2008. The policy states that “appropriate dress and personal appearance is essential for all professional employees.”

“The district trusts its teachers’ judgment,” said Julie Boyle, Executive Director of Communications for USD 497. “If a concern is raised about an employee’s attire, the district has a process in place to follow up with that individual.”

Beginning her tenure at Lawrence High School in 2021, principal Jessica Bassett noted stark differences between the ways teachers dress for school in Lawrence compared to her previous district. Bassett served as principal in Kansas City, MO. schools for 11 years prior to coming to Lawrence High.

Bassett said teachers were asked to dress professionally in her past district, and only wore jeans on Fridays.

“This is different from my previous district,” Bassett said. “It’s working here, and so my attitude toward it is, if it is a reflection of what the community is and it’s not taking away from any of the experiences that students are having, then I can accept that and be OK with it.”

Bassett connected the relaxed dress guidelines to an overall more close knit and laid back culture of Lawrence.

“The dress code is kind of centered around the personality of the community,” Bassett said. “There is … a family kind of atmosphere here and it’s really laid back. And that laid back attitude just reverberates throughout the community, which puts us at a place that we can be a little bit more relaxed with how we dress.”

French teacher Megan Hurt enjoys the laid back dress guidelines and adds variety to outfits through trying to wear a different hat every day until running out. Hurt wears funky hats for both warmth and style.

“I’ve been collecting hats since I was a kid and so I’ve got a ton,” Hurt said. “I maybe have 200 hats…I think hats are wonderful and they actually serve very practical purposes.”

Hurt recounted a negative interaction she experienced with an administrator due to a hat.

“My hats have not always been welcome by administration,” Hurt said. “It’s probably been more than a decade since we had a policy that forbade hats…During those years, when students weren’t allowed to wear hats, I didn’t wear hats either, because that’s not fair. I remember specifically walking into the office …and having an administrator say, ‘do you really have to wear that hat in here?’ And it was a cold day, it was a stocking cap, so I don’t know.”

Hurt acknowledged her effort to be mindful of current guidelines for students relating to hats.

“I’ve had some reaction from [administration] but I’ve also tried to be sensitive to what the policies were so I’m not being unfair to students,” Hurt said.

While Hurt balances both fun and functionality, janitorial staff member Dustin Welcher does his best “not to stick out,” sticking to strictly practical wardrobe items. Welcher said he wears pants, boots and a gray shirt daily.

“I don’t really care about the looks,” Welcher said. “I wear a hat for two reasons. One because I like it, two because it keeps the sun out of my face.”

“I love what my job enables me to wear,” Brensing said. “I get to be comfy all day, and don’t have to worry about not being able to move.”

Jewelry and ceramics teacher, Deena Amont, makes outfit decisions based on her teaching as well. Amont makes an effort to wear jewelry and clothing related to concepts she’s teaching, giving students a wider understanding of design.

“Today I’m wearing these earrings that have a zentangle design and that happens to be something we’re doing in my ceramics class,” Amont said. “I think that kind of makes it more realistic. It shows how art can be incorporated into daily life.”

“Because these are concrete floors, they’re really hard to stand on all day,” Amont said. “I like to wear funky shoes but I definitely have school shoes that are shoes that I don’t mind getting really dirty.”

“What I wear and how I present myself and my curriculum are very much intertwined,” Perkins said. “I have found that the clothes/hair/accessories would open doors to a world of communication.”

“I love Lawrence,” Perkins said, “because, for the most part, it is an open minded community with a wide range of people. Lawrence High seems filled with individuals who are not afraid to be themselves in whatever that definition may be.”

Provost noted Lawrence High’s distinct encouragement of diversity, both of teachers and students.

“Out of other schools that I’ve worked at, this school has been more about trying to embrace the uniqueness of the student than others,” Provost said. “And I think that allows teachers to embrace their uniqueness as well.”