The Lions will now turn their eyes to No. 1 Derby for a chance at a state championship berth. 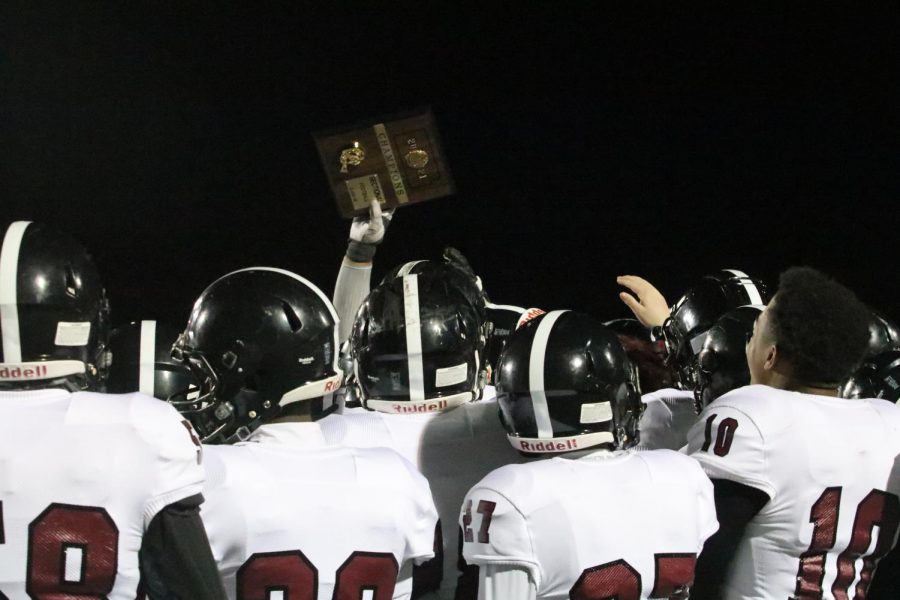 The Lions celebrate their

Despite the eye-catching, high-scoring offense, Lawrence High’s defense has really shown up in recent matchups, especially in their 41-22 win against Manhattan on Friday, November 12th.

The defense forced four turnovers and got two fourth-down stops on Friday, which allowed the offense better field position and the ability to consistently score. Manhattan’s offense was daunting for the Lions. In the games leading up to their matchup against LHS they averaged over five touchdowns a game.

The defense got off to a poor start, allowing two Manhattan scores going into the second quarter, but the Lions were able to keep the game tied, partially thanks to a 59-yard touchdown run from senior quarterback Truman Juelsgaard.

After the close start, LHS head coach Clint Bowen knew the defense would need to step up for a Lion victory.

They did just that.

The Lions’ defensive line held strong for three downs and forced Manhattan into a short fourth-down attempt. After being flushed out of the pocket, Manhattan’s quarterback was tackled by junior Lance Bassett, giving the Lions the ball.

The stop marked an important point in the game and swung the pendulum in the Lions’ favor.

Early in the second half, the defense started a streak of dominance that allowed the offense to run up the scoreboard.

Junior Kenton Simmons forced back-to-back fumbles from Manhattan’s senior running back and quarterback, both of which led to Lion scores.

“Simmons has become our force in the middle for our defense, he’s just a hammer on blocks inside and wherever,” Bowen said. “Even if he’s not making a tackle, he still anchors the defense.”

The Lions continued their second-half shut-out after junior Jayden Brittingham tackled Manhattan’s quarterback on fourth down.

After a stagnant drive by the Lions’ offense, they lined up to attempt a 47-yard field goal. Few teams would be able to attempt such a kick, but with 4.5-star senior kicker Grant Glasgow, the Lion coaches were confident.

Perhaps Glasgow’s most impressive kick of his short yet illustrious football career, the kick was the longest he’s ever made, complemented by the fact he made it in 30-degree weather.

“He works at it, and he goes well beyond what’s expected of him,” Bowen said. “I sent them out there for the experience of the team, and some hope he’d put it through. A 47-yard field goal in those temperatures is really impressive.”

The defense finished off the game by stopping 2 of the next 3 Manhattan drives with a Keyan Crawford interception and Evan Bannister forced fumble before allowing Manhattan a score and two-point conversion late in the fourth quarter.

The concession didn’t hurt the Lions in the long run as they were still able to close out the dominant 19 point victory.

Bowen praised the defense and all they’ve done this season.

“They’ve really shown up every game this year,” he said. “Outside of that Shawnee Mission Northwest game, they’ve played really well. I love their mentality of going out and getting big stops, huge goal-line stops and 4th down stops. Those have been really big for us.”

The Lions will face the undefeated Derby Panthers on Friday, Nov. 19 for the right to go to Emporia and compete for a State Championship.

“It’s an exciting week for the program, it’s a big deal and we’re just one win away from that championship where we haven’t been for several years now,” Bowen said.