The back and forth defensive battle featured two of the best and most historic programs in the state of Kansas. 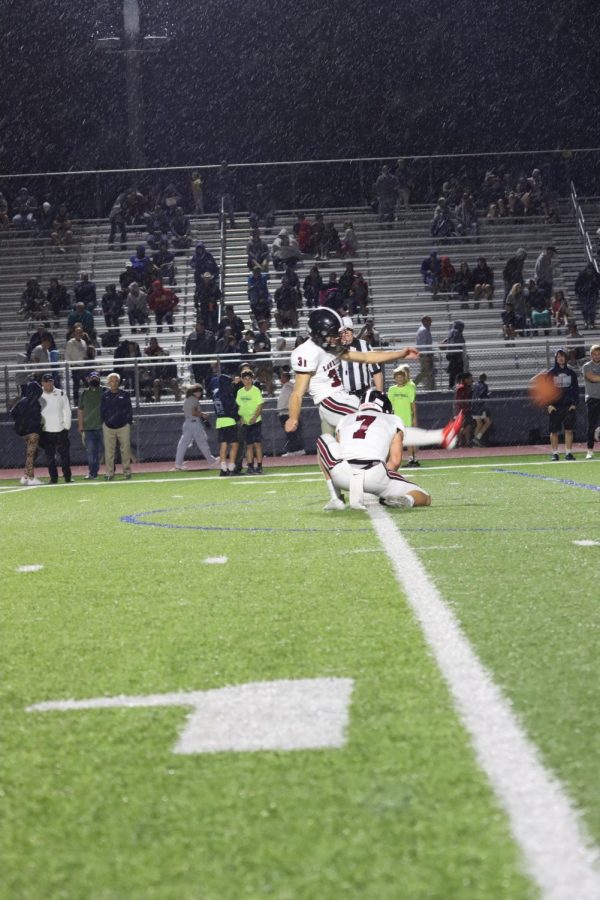 Senior kicker Grant Glasgow attempts a kick during a game against Mill Valley.

From nine yards out, the kick was similar to many attempts first-year placekicker and senior Grant Glasgow had attempted in practice. The reaction after it split the uprights, however, proved the three points would be cemented in LHS football history, and Glasgow’s mind, for a long time.

On Friday night, Oct. 15, parents, students and LHS football fans alike made the 35-minute journey to the Olathe District Activity Center (ODAC) to watch their Lions battle against the Olathe North Eagles. The game was exciting, back-and-forth and of utmost importance for two teams vying for playoff seeding entering the last few weeks of the season.

Tied at seven going into the second half, great plays had been made on both sides of the ball up to that point. Junior tight end Cole Watson snagged a 22-yard pass from senior quarterback Truman Juelsgaard followed by senior linebacker Evan Bannister’s forced fumble and junior wide receiver Dom Ostronic’s 20-yard receiving touchdown. But even with the strong play from the Lions, it wasn’t enough to pull away from the Eagles, who were ranked 4th in the state at the time.

But the Eagles hadn’t been able to pull away from the Lions either, thanks in most part to a strong defense, something that has been a focal point for the Lions this season. First-year head coach Clint Bowen comes from years of defensive coordinator experience at the NCAA Division 1 level.

“The defense was coolin,” junior Kenton Simmons said. “We had only let up one score at that point, so we were pretty confident. We were ready for the challenge, but we were gonna go out there and fight anyway.”

Avion Nelson seemed to agree with Simmons’ sentiment. The new-to-football senior picked off Olathe North quarterback Noah Palmer deep in LHS territory. But following an unsuccessful Lions drive, ON scored late in the third quarter off a Palmer 1-yard run.

The Lions weren’t finished yet. Juelsgaard had a momentous run for 39 yards, which eventually set up his 5-yard touchdown run to even the game at 14.

After another failed offensive possession for both the Eagles and Lions, ON had the ball with five minutes to play.

The Eagles painstakingly drove down the field, devouring four minutes of the clock as the game wound to the end. At the Lion’s 40, ON had a daunting fourth down in front of them. Palmer snapped the ball and handed it off to the Eagle’s running back, but Simmons and senior Malique Morris-Ramirez were there to stop him. The tackle resulted in a turnover on downs, giving the Lions the ball back with very little time left in the final quarter.

After picking up a couple of first downs, Clint Bowen used a timeout to stop the clock with the ball at the Olathe North 9-yard line with 1.3 seconds to play. Glasgow said he’d never forget that 9-yard line.

Junior long snapper Tate Meyer snapped the ball to Juelsgaard, who also serves as the holder.

As many Lions football fans have become accustomed to, Glasgow’s kick was good, sealing the Lion victory.

As the ball traveled between the uprights, the sideline and visitor section at ODAC erupted into jubilant cheer. The players rushed the field and congratulated each other on a hard-fought win.

“We won, I just wanted to start running and celebrating,” Glasgow said. “So my teammates and I all bear-hugged. I felt this instant rush of adrenaline, and it felt great. It was an awesome experience and moment in my life.”

After shaking hands with the Eagles, the Lions quickly ran back towards the gates of the field. Waiting there were the fans, who got as close as they could to the team knowing they couldn’t rush the field.

The football team, cheer and pom squads, student section and other LHS fans then interlocked arms to sing the LHS Alma Mater.

In an interview with PrepsKC on YouTube, Bowen summed up his thoughts on the game.

“Talk about a classic game,” Bowen said. “In 1988 [Lawrence High] won a game against Olathe North on a field goal about that same angle. The history of this game is unbelievable. Great team over there, and our kids competed and won a big game.”

Bowen also thought the defense performed at a high level, something that was key to the low-scoring win.

“Our defense was lights-out tonight. That’s an unbelievable effort by our coaches and kids. Great job by coach [Jeff] Lyster and defensive staff and players.”

The Lions now turn their attention to cross-town rivals Free State, where there is still lots to play for. The Lions will look to secure a higher seed for the playoffs and defend their win in the rivalry last year.